Those who are comfortable reading online in PDF format can download the 2 volumes of economic survey for FREE from the website indiabudget.nic.in. If you need the Economic Survey in book format, you can get it from online shopping websites like Amazon or Flipkart. 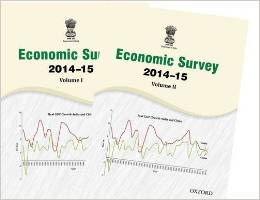 Flow of most surveys were something similar to what is given below and were published as single-volume-documents containing 13 or 14 chapters.

Inspired by the IMF’s World Economic Outlook, 2014-15 Survey departs structurally from its predecessors and presents its output in two volumes. Volume 1, the forward looking document analyses the prospects of the economy while Volume 2, the backward looking doucment analyses the state of Indian economy. From the UPSC exam perspective, we feel Volume 2 is more important for Prelims. Volume 1 can provide invaluable analyse and points for Mains.

The highlights from selected chapters:

A National Market for Agricultural Commodities