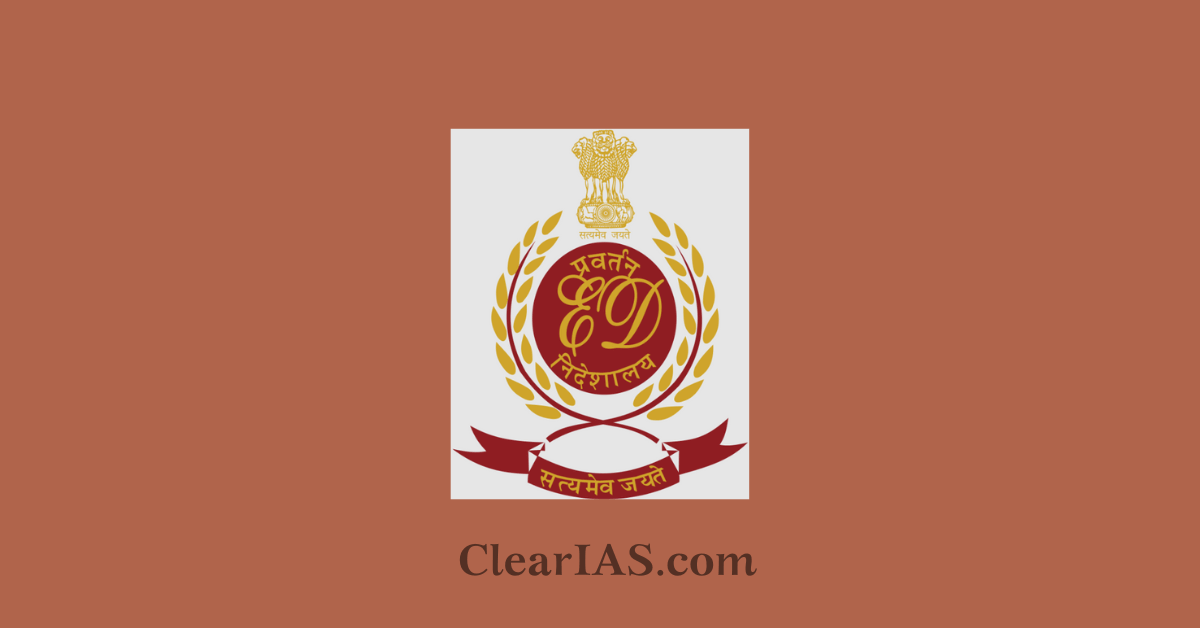 The Enforcement Directorate (ED) is often on news for various economic crimes related cases. Read here in detail about the ED.

The Directorate of Enforcement is a multi-disciplinary organization mandated to investigate offenses of money laundering and violations of foreign exchange laws.

The Enforcement Directorate has its headquarters in New Delhi. There are five regional offices in Mumbai, Chennai, Chandigarh, Kolkata, and Delhi headed by Special Directors of Enforcement.

The tenure of the ED director has been extended from two years to five years in 2021.

The origin of this Directorate goes back to 1st May 1956, when an ‘Enforcement Unit’ was formed in the Department of Economic Affairs for handling Exchange Control Laws violations under Foreign Exchange Regulation Act, 1947 (FERA ’47).

With the onset of the process of economic liberalization, FERA 1973, which was repealed and in its place, a new law- the Foreign Exchange Management Act, 1999 (FEMA) came into operation in June 2000.

Further, in tune with the International Anti-Money Laundering regime, the Prevention of Money Laundering Act, 2002 (PMLA) was enacted, and ED was entrusted with its enforcement from July 2005.

With the increase in the number of cases relating to economic offenders taking shelter in foreign countries, the Government has passed the Fugitive Economic Offenders Act, 2018 (FEOA), and the Enforcement Directorate is entrusted with its enforcement with effect from April 2018.

The statutory functions of the Directorate include enforcement of the following Acts:

For the trial of an offense punishable under section 4 of PMLA, the Central Government (in consultation with the Chief Justice of the High Court), designates one or more Sessions Court as Special Court(s).

But unlike CBI, ED cannot register a case on its own. It is required by the agencies such as CBI or state police to register an offense based on which the Case Information Report is filed by Enforcement Directorate.

Recently, the Supreme Court upheld the power of the Enforcement Directorate to arrest under PMLA.