Ritu Raj made into Indian Administrative Service (IAS) this year with All-India Rank 69 in UPSC Civil Services Exam. He had shared one of his essays he wrote in October 2014 – during his UPSC preparation days – for the readers of clearias.com. We are sure that this write-up can help lot of aspirants not only in essay writing, but also in General Studies papers. Clear IAS, on behalf of our readers, congratulate Ritu Raj for his exceptional performance in UPSC CSE 2014. We wish you all the best and a successful career!

Essay topic: How can the new government make India a global manufacturing hub? 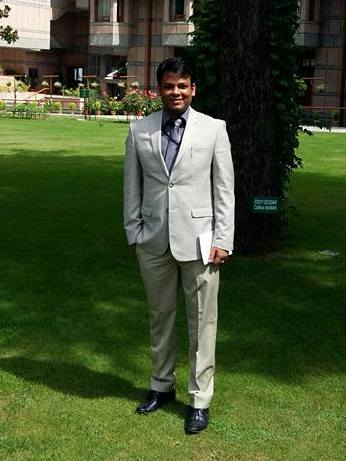 The first PM of India had referred the Industries of India as “temples of modern democracy” and it can hardly be refuted today. The industries of India were one of the major entities to protect the democracy of India, to check the growth of Neo-Imperialism that pervaded through the cold war and thereby helped sustain the economy and civil libertarian democracy which was left devastated and exploited at the dawn of independence.

The nature of growth of industries has seen transformation with the changing global scenario and domestic conditions traversing from a centralised economy to now a neo-liberal free trade economy.

Today, India boasts of 3rd rank in world in GDP in PPP terms even ahead of Japan, a heavily industrialised nation and indeed the accolades has to be given to the economic growth and development  brought through our industries which otherwise would not have been possible.

This dream forces us to introspect the past failures and reinvigorate our actions and policies that not only make India a GLOBAL MANUFACTURING HUB but also a Nation of Our dreams as envisaged in the Preamble of our constitution.

In this essay, we shall see a brief evolution of the growth of industries in India and the present scenario. We shall then go through the various problems that hinder the growth of India as a manufacturing nation. We shall analyse how certain policy measures have affected the right policy climate and confidence of the private sector which has curtailed  investments from both foreign and domestic avenues. We shall then suggest reforms and steps that needs to be brought in  to bring the right policy climate which is stable, predictable, enabling and irreversible and not only boosts investments in India but make India a favourable business venture  while also keeping in light of the fact that India is still a developing nation and the interests of the Nation has still to be protected in era of globalisation and free market economy.

Evolution of Industries in India

The Indigenous Industrial growth in India was in contestation with the British on-going Financial Capitalism. Thus the growth was highly resource starved, with lack of Indian heavy industries and dependency on foreign imports. It checked the growth of Indian ancillary industries bringing huge unemployment and regional imbalance.

The backwardness and dependency of Indian private industries was precisely the reason when in the BOMBAY PLAN-1946 , the industrial class accepted a State-Controlled mixed economy over private led in-order to boost rapid industrialisation  and also to pre-empt socialism by combining equity with growth.

The Industrial Policy of 1956 had highlighted the need for a mixed economy and the need for heavy industries. The Nehru-Mahalanobis model of growth  boosted the growth of heavy enterprises in India and India witnessed the growth of steel plants, huge dams, manufacturing units – automobiles, ports, airports etc. which was slowly but steadily transforming India.

However the prolonged continuation of Import-substitution-Industrialisation model, the growing ICOR(incremental capital output ratio) of industries in mid-1980s and the failure to make a timely shift to a liberalised economy which was rightly tapped by the south-east Asian nations, culminated in the economic crisis of 1991 and forced institutional changes in the economy that brought in liberalisation, privatisation and globalisation of the Indian economy.

The situation of the economy as it exists today is that it stands on solid grounds with lots of positives to surge ahead.

India today is called as the Back-Office of the world with our IT sector dominating the world. There is huge skilled Labour resource and booming market for the world with the growing capacity of the people brought in through various enabling social legislations and the growth and development.

The proximity to both Africa and south-east Asia and strategic location of India in the Indian Ocean offers great business opportunity for the business community of the world. The growing partnerships and FTAs(free trade agreements) with ASEAN, SAARC provides added opportunity with the India’s growing interest in Regional Comprehensive Economic Partnership (RCEP) — a grouping led by the Association of South East Asian Nations (ASEAN) and is expected to pitch in with $644 billion.

There are more than 13 major ports and 200 small ports that can be effectively used as trans-shipment hub. The government today is much better prepared and motivated to boost investments in the country and it can be ascertained by the vigour that the government has displayed in the current budget-2014 that aims at resolving tax disputes, and bringing a stable policy climate for the industry.

The Forex-Reserve is more than $300 billion, the average growth in the 11th FYP was 7.9% even after facing two economic crisis. The CAD(current account deficit) was as low as 1.7% of GDP while FD has substantially reduced to around 4.1 %.

The inflation as is witnessed currently is below 5.9 of CPI which is historic low. The growing infrastructure like roads, electricity, transport, shipment etc have just transformed the economy which is huge as compared to India even of 1990’s.

These factors coupled with huge demographic dividend, huge availability of raw materials are the prerequisite and essential conditions for any country to be a manufacturing hub and is readily available in India.

However there are lots of drawbacks that have hindered the actual realisation of the potential that India is capable of. This can be enumerated by the fact that despite  substantive liberalisation since last 6 months the economy has not really caught up.

This statistics do not augur well to drive investments and thereby boost manufacturing. It also brings forth the picture that there is no one factor inhibiting growth and investment and the situation requires a more detailed in depth understanding.

Let’s try to analyse the same one by one and recommend for changes.

ISSUES/BOTTLENECKS IN GROWTH AND MANUFACTURING

The Japanese delegation to India a week ago highlighted the need for power and infrastructure to motivate Japanese investment of committed $35 billion in india. It brings out the grim reality how investments are curtailed .

The software companies (Infosys) have started their own solar projects to meet their power needs, which is not possible for small start-ups.

Suggestions to undo the bottlenecks and drive manufacturing :

The Gas pricing need to be more lucrative to drive investment to boost exploration .

JNNSM(Jawaharlal Nehru National Solar mission) has to be taken in a more dedicated manner and at a national scale that can reduce the prices of the solar panels and spurt demand and investment.

Such steps will enhance the capacity of the government.

World Bank Report of SOUTH ASIA ECONOMIC FOCUS REPORT, 2014 has highlighted fact that SOUTHASIA has the potential to become the “MANUFACTURING HUB” of the world especially when the East Asian Labour costs have increased and requires further competitive boosting.

It also highlighted that India will claim ALMOST 80% of the SOUTH ASIAN REGION OUTPUT.

The above report sums it all for the future prospects of India and the potential that it carries to be not only the “BACK-OFFICE” of the world  but also the “FACTORY OF THE WORLD” and claim it rightful place in the world economy.

Another report of World Bank in 2015 related to Urbanisation challenges the common notion that urbanisation leads to inequality rather stated that it provides more opportunity for lower class to move into upper class and thereby reduces inequality and is especially true for the SC/ST/OBCs. Thus manufacturing and urbanisation which are intertwined can lead to not only growth but also holistic development.

The world is eagerly awaiting to witness the rise of the “ASIAN ELEPHANT” and it is time to prove them right. The vigour of the political class displayed by the new government to boost manufacturing and growth along with the favourable global conditions augurs extremely well for the rise of India. The favourable policy climate brought in by various legislations and the improving economy of USA and Europe has brought in new prospects for the Indian Manufacturing Industry.

IMF states India as a “bright spot” in a slow global economy.

However there is more to be done than said or spoken about. This favourable conditions has to be conditioned with the strengths of India which is its cheap labour, skilled resource and huge market coupled with dedicated and transparent administration. Good Governance has to be brought in through a networked approach of Government, private sector and the civil society that will facilitate and build trust and confidence essential with adequate checks and balances for any economy to grow and India is no exception.

It is only through dedicated and sustained efforts that India will attain “SWARAJ” in its true sense and be not only the global manufacturing hub but also the “light of the world”.