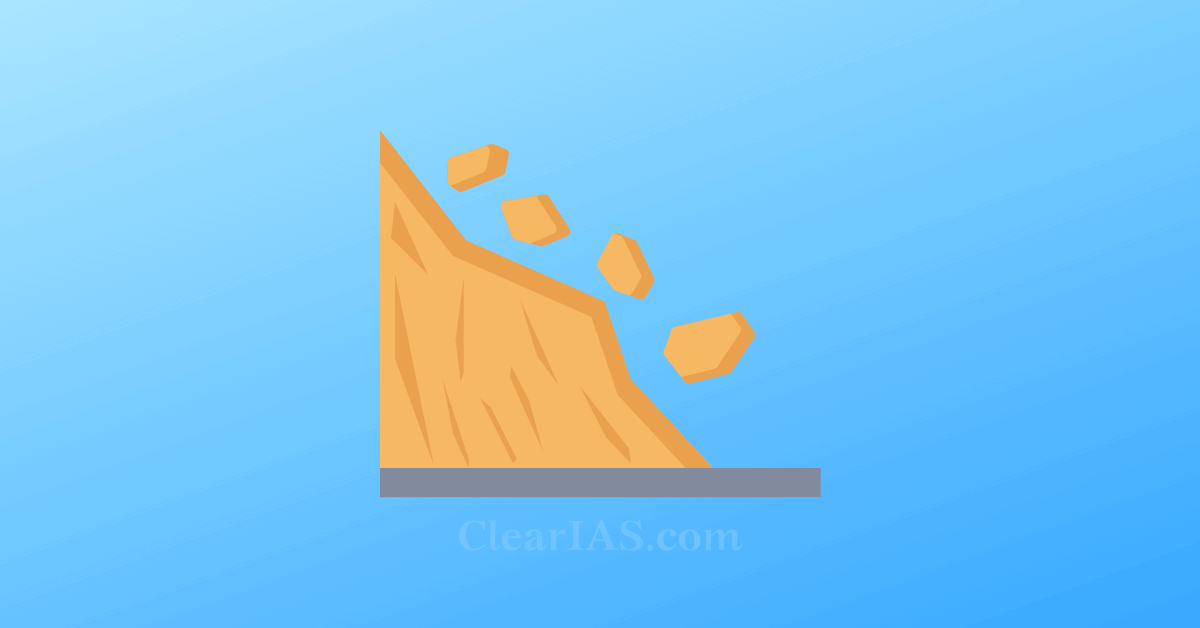 We have been discussing geomorphic processes in our previous notes in the Geography section.

What are Exogenic Forces?

The forces which derive their strength from the earth’s exterior or originate within the earth’s atmosphere are called as exogenic forces or external forces.

The action of exogenic forces results in wearing down and hence they are considered as land wearing forces.

The processes which occur on the earth’s surface due to the influence of exogenic forces are called exogenic processes or exogenic geomorphic processes.

All the exogenic processes are covered under a general term- denudation, which means strip off or uncovers.

Note: A process is a force applied on earth materials affecting the same. An agent is a mobile medium (like running water, moving ice, winds, waves etc) which removes, transport and deposits earth materials.

Geomorphic processes and geomorphic agents especially exogenic, unless stated separately, are one and the same.

Gravity and gradients are the two things that make these agents mobile.

All the movements either within the earth or on the surface of the earth occur due to gradients– from higher levels to lower levels, from high pressure to low pressure etc.

We know that force applied per unit area is called stress. Stress is produced in a solid by pushing or pulling.

The gravitational force acts upon all earth materials having a sloping surface and tends to produce movement of matter in the down-slope direction. This creates stress and induces deformation to the particles.

Weathering is the action of elements of weather and climate over earth material.

It can be defined as mechanical disintegration and chemical decomposition of rocks through the actions of various elements of weather and climate.

When rocks undergo weathering, some minerals are removed through chemical/ physical leaching by groundwater and thereby the concentration of remaining (valuable) minerals increase.

Weathering can be classified as – physical, chemical and biological:

a) Unloading and expansion:

b) Temperature changes and expansion: Chemical weathering can be due to solution, carbonation, hydration or oxidation/reduction.

These movements transfer the mass of rock debris down the slope under the direct influence of gravity.

Usual geographic agents like running water, glaciers, wind, waves etc do not have much role to play in mass movements, and it is gravity, which is the main driving force. 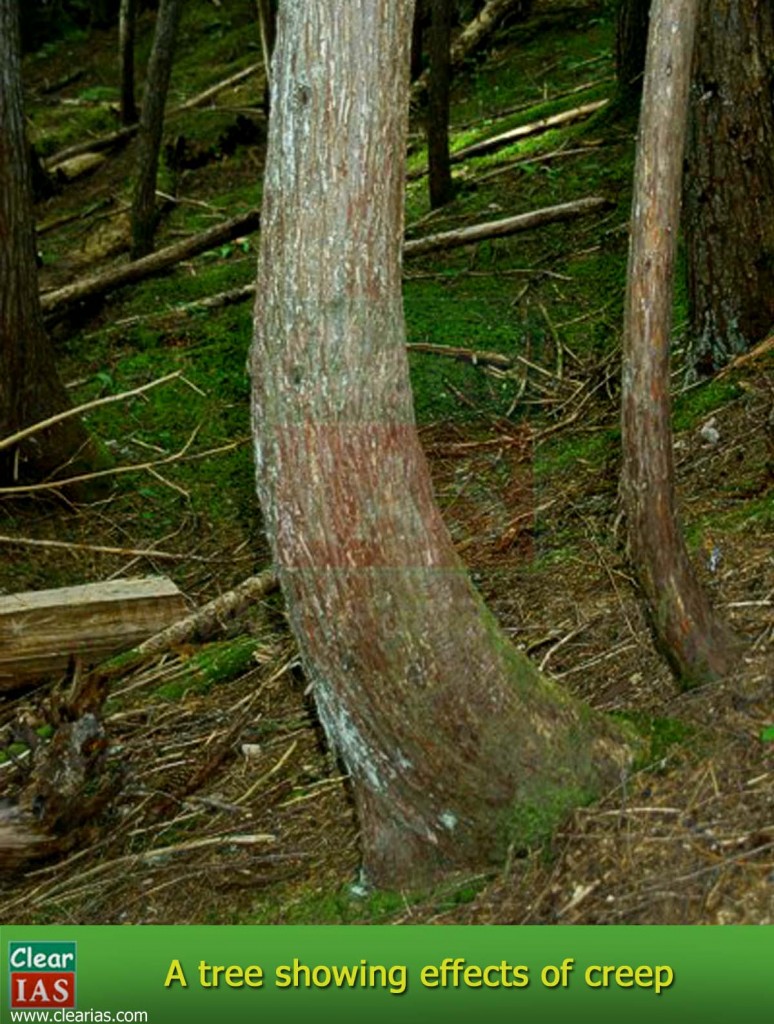 It occurs on moderately steep, soil-covered slopes (doesn’t need to be lubricated with water as in solifluction). The movement is extremely slow and imperceptible except through extended observation. We might notice that some of the electric posts in our region which are posted in sloppy areas deviated from their horizontal linearity. This is an effect of creep.

It is the process of slow downslope flowing of soil mass or fine-grained rock debris saturated or lubricated with water. It can be said as a type of creep with lubricated water influences the movement. It mainly occurs in permafrost regions as the layers of groundwater are occupied in between permanently frozen soil and rocks. 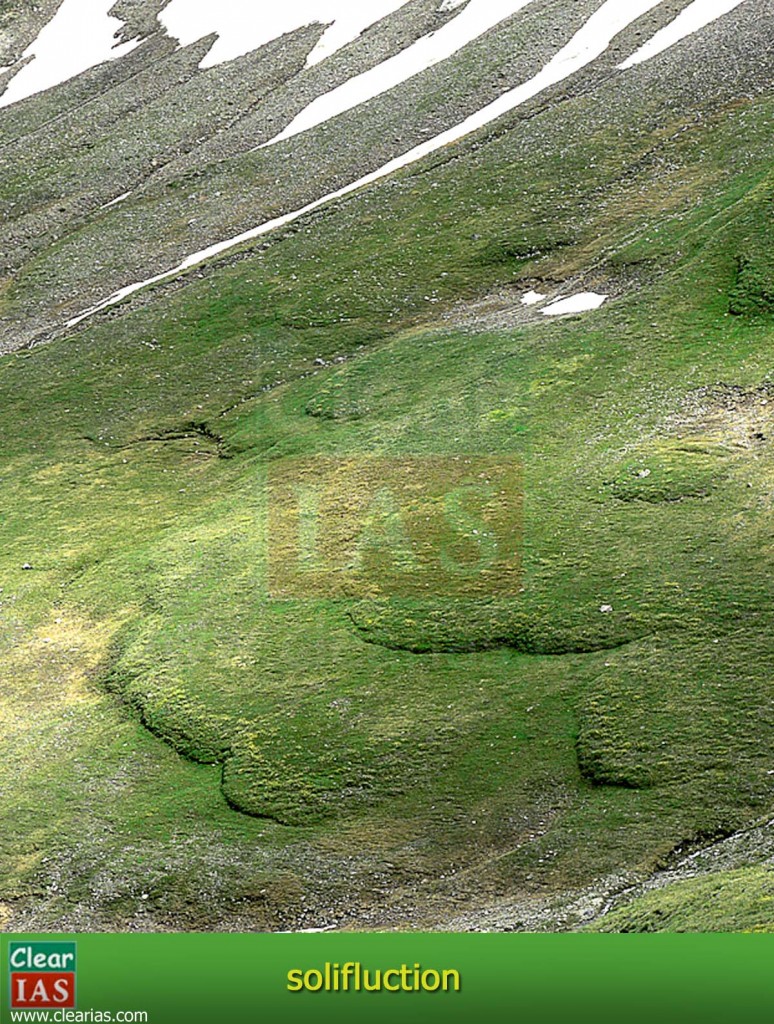 The movement of water-saturated clayey or silty earth materials down low angle terraces or hillsides is called earthflow.

In the absence of vegetation and cover and with heavy rainfall, thick layers of weathered materials get saturated with water and either slow or rapidly flow down along definite channels is called as a mudflow.

It is more in humid regions with or without vegetation. It occurs in narrow tracks on steep slopes and is similar to snow avalanche.

In landslides, the materials involved are relatively dry irrespective of the above said rapid mass movements. Landslides can be classified into a slump, debris slide, rockslide etc

Erosion is the acquisition and transportation of rock debris by geomorphic agents like running water, the wind, waves etc.

Though weathering aids erosion, it is not a pre-condition for erosion to takes place. (i.e., erosion can take place in unweathered conditions also)

The deposition is a consequence of erosion. The erosional agents lose their velocity and energy on gentle slopes and materials carried by them start to settle themselves.

Note: Deposition is not the work of any agents. It is just the end result of erosion.

Next in the series: Erosion and Deposition: Action of Running Water and Groundwater