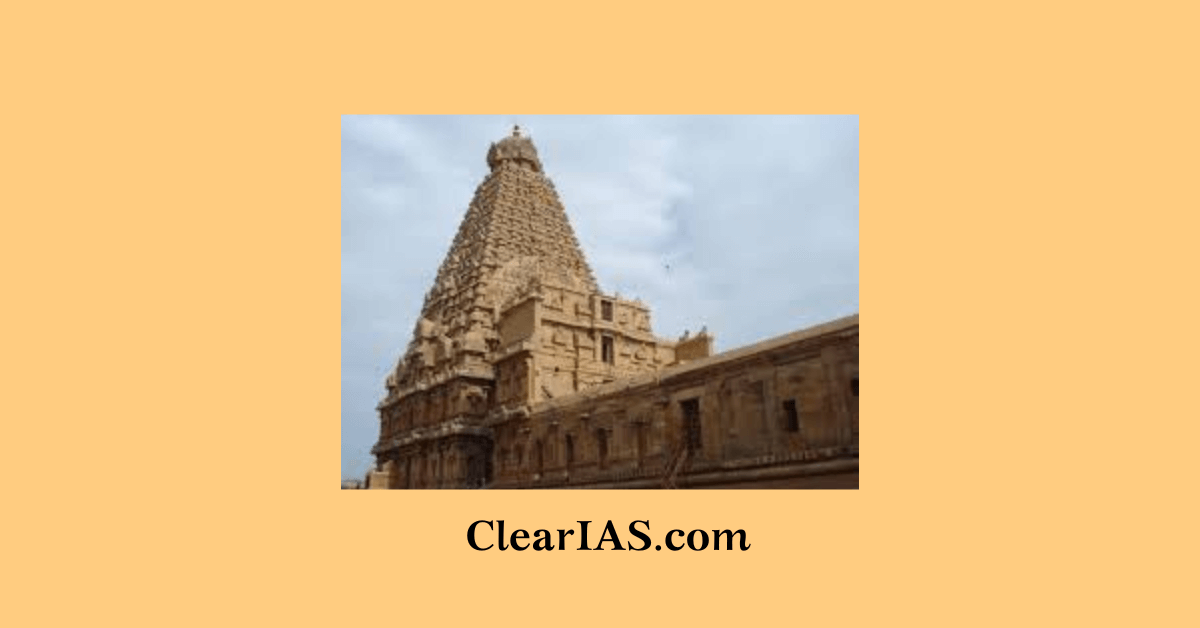 UPSC questions related to the topic ‘culture’ are not so easy to prepare. The main reason is the lack of quality study materials which explain the same in simple language. Architecture is an important area of the culture topic. In this article, we shall see the details of the Chola Temple Architecture, which is an important part of Dravidian temple architecture. UPSC had asked a question related to this topic in 2013 mains. The question was: Chola architecture represents a high watermark in the evolution of temple architecture. Discuss. We shall see the answer, but before going into the details of Chola architecture, let’s make our fundamentals strong.

Pallavas used bricks, lion motifs, dwarfed gopurams etc. Things changed at the hands of Cholas. They used stones instead of bricks. The walls were decorated with sculptures and paintings of deities, kings and queens (not lion motifs). Temples have enclosed decorative walls and entrances (Gopuram). They also have an audience hall known as Mandap. The deity room is known as Garbhgriha. The pyramid-like storey above the deity room is known as Vimana.

These are characteristic architectural designs of Chola temples carved in temple walls.

These are decorative niches of Chola temple walls where deities are sculpted.

These magnificent architectural designs are carved as projections in walls with the placing of deities within it. The pilasters are positioned on both sides of the main devakusthas.

These are narrow niches in Chola temple walls with a special designs for placing sculpted images.

These are two lion heads which crown the curved roof of the pilasters.

Makar along with warrior heads positioned below all the decorative devices.

It is a rounded structure placed on the basement of a temple sculpture or motiff sometimes decorated with ribs.

The base of the walls of Chola temples are decorated with lines of mythical animals called yazhi.

Besides the main shrine, Chola temples were evidence of subsidiary shrines for other deities called parivardevatas which were highly decorative.

These are some prominent directions transparent in Chola temple with architectural design for the placing of deities.

The walls of Chola temples are seen with inscriptions with architectural design.

Comparison between Pallava and Chola Architecture

Apart from the discussed features, Chola temples had a beautiful shikara stone at the top. It had elaborate and carefully made carvings. It is a marvel how these structures weighing in tonnes is placed without the help of cranes. During their reign, Cholas made temples in Nagaeshwvara, Brihadeshwvara, Airavateshwara and Chidambaram. Other kingdoms in South India and Sri Lanka followed their style.