In our article series on Indian culture, we have so far seen the temple architecture peculiarities of Chola and Chalukya Dynasty. In this post, we shall see the temple architecture features of Hoysala dynasty. The Karnata Dravidian tradition developed in the 7th century under the patronage of Badami Chalukya got matured under Western Chalukya (Kalyani Chalukya) in the 11nth century. The Chalukya style got perfection as an independent style under Hoysala rule in the 13nth century. 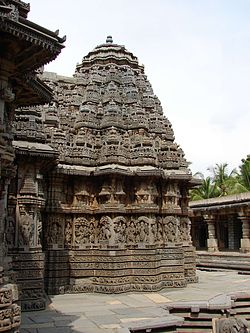 Influence of Chola and Chalukya art

The decoration of the Western Chalukyas (Kalyani) influenced the Hoysala decoration. The pillar image called “Sthambha buttalikas” seen in Hoysala art bears evidence of Chola and Chalukya art. In Chennakeshava temple, the image of Mohini seen in one of the pillars in the mantapa bears the fine example of Chola art in Hoysala art.

A special difference between Hoysala and Chalukya art

The Hoysala artists ornamented both top and surface of the pillars while Chalukya artists left the top plain and decorated only the surface.