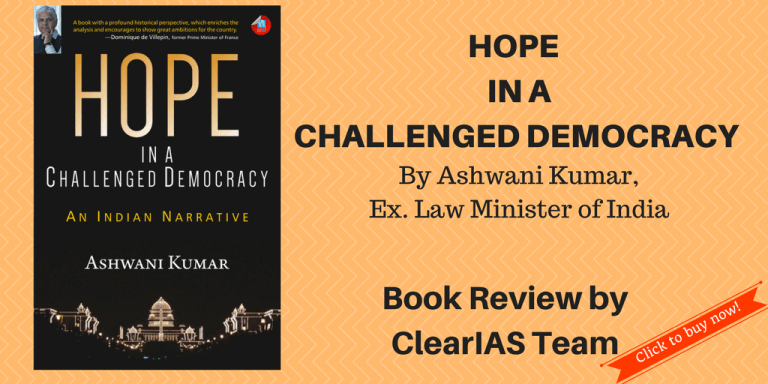 Democracy is undoubtedly the best political system available which expresses the will of the people. But it’s not a flawless philosophy. Democracy calls into activity the intelligence and character of ordinary men and women. That’s its virtue and vice – at the same time.

‘Hope in a Challenged Democracy’ by Ashwani Kumar

Democracy is facing a lot of challenges globally, and India in particular. It’s not easy to be truly democratic. And to remain truly democratic, one should know the essence of democracy in the real sense. That’s what Ashwani Kumar, the former Law Minister of India has tried to portray in his new book ‘Hope in a Challenged Democracy: An Indian Narrative’.

India is a resilient but faltering democracy!

Ashwani Kumar points out that there are aberrations in Indian democracy. But he has not tried to make any party responsible for the same. This book is an objective analysis of the fault lines of our democracy.

The former law minister gives examples which make every intelligent person re-think about the existing state of democracy. In the 1998 Lok Sabha elections, Dr. Manmohan Singh lost South Delhi; (former dacoit) Phoolan Devi won Mirzapur. He says, most commentators in the world, including the late Khushwant Singh, asked whether this was the best image of Indian democracy.

“There are many issues…”, Ashwani Kumar points out

The books takes us through different areas like – state of the nation, promise of the Constitution, the dynamics of diplomacy, transforming the economy, and lessons learnt and unlearnt.

About the Author:  Ashwani Kumar Dr Ashwani Kumar is an eminent lawyer, author,  and veteran parliamentarian. He was a member of the Rajya Sabha for fourteen consecutive years until his retirement in April 2016. During this time, he held various ministerial positions including Minister for Law and Justice, Special Envoy of PM Manmohan Singh to Japan (2013) and chaired several important parliamentary committees.

How to buy ‘Hope in a Challenged Democracy’ by Ashwani Kumar

'Hope in a Challenged Democracy' by Ashwani Kumar 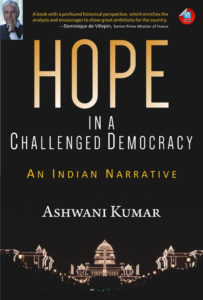 Book Title: 'Hope in a Challenged Democracy' by Ashwani Kumar

Book Description: The book 'Hope in a Challenged Democracy' by Ashwani Kumar is a worthy read for all those who are interested in Indian polity, democracy, philosophy, and current events.

The book 'Hope in a Challenged Democracy' by Ashwani Kumar is a worthy read for all those who are interested in Indian polity, democracy, philosophy, and current events. The book gives a sweeping yet comprehensive view on the state of the nation and several critical areas, which would be of great value for Civil Service aspirants.