Areas of co-operation between India and UAE

Let’s look at the areas of co-operation between the 2 countries:

With respect to oil trade, UAE was the sixth largest source of crude oil for India in 2015. There is an intention for the Abu Dhabi National Oil Company (ADNOC) and the Indian Strategic Petroleum Reserves Ltd. (ISPRL) to sign a Memorandum of Understanding on the Establishment of a Strategic Petroleum Reserve in India, and has agreed to conclude negotiations in the near future.

With respect to bilateral investments, total FDI from UAE to India is estimated to be US$3.01billion (Jan. 2015) and ranked as tenth biggest investor in India. Abu Dhabi Investment Authority (ADIA) announced its plans of investing US$ 2 billion in Indian Infrastructure sector. During PM Modi’s visit last year, the 2 sides agreed to establish an UAE-India Infrastructure Fund, setting an ambitious target of $75 billion to support investment in India’s infrastructure. UAE has also appreciated Indian govt. initiatives like Smart City, Skill India etc. and they are expected to invest in those areas, in addition to fields like oil, renewable energy etc.

UAE is home to an Indian expatriate community, 2.6 million strong in numbers, the largest expatriate community in the UAE. Professionally qualified personnel constitute about 15 & 20 percent of the community, followed by 20 percent white-collar non-professionals (clerical staff, shop assistants, sales men, accountants, etc.) and the remainder 65% comprises blue-collar workers. There is also a significant business community from India. The annual remittances made by the large Indian community in UAE amount to over US$15 billion (2013).

A significant aspect of bilateral ties today is the closer convergence on security and counter-terrorism. Notwithstanding a security agreement in place since 2011, progress on counter-terror and maritime security had been slow. Recently, in the joint statement two sides alluded to Pakistan in their joint statement after the prime minister’s visit when calling upon “all states to reject and abandon the use of terrorism against other countries, dismantle terrorism infrastructures and bring perpetrators of terrorism to justice”. Further with the rise of Islamic State, the need for co-operation in security areas and intelligence sharing has achieved higher moral ground. Last year, in September, UAE deported to India a women suspecting of having links to IS. Around 20 Indians have been intercepted while crossing over to conflict zone. The joint production of defence equipment under the Make in India programme is another important area of focus.

The two nations share historical ties and have maintained regular cultural exchanges both at official and popular levels. India and UAE signed a Cultural Agreement in 1975. The ICCR had opened a Culture Centre in Abu Dhabi in 2009.

There is increased convergence of ideas based on needs and priorities in different issues of global commons. Collaboration between the two countries happen over issues discussed in United Nations Framework Convention on Climate Change, setting up of International Solar Alliance, support to International Renewable Energy Agency, IRENA.

UAE and India agreed to further strengthen their cooperation in several key areas, including trade and investment, security, counter-terrorism, joint defence production, space cooperation, IT and electronics. Active engagement between the UAE Space Agency and the Indian Space Research Organization (ISRO) is in effect, which has led to the signing of a Memorandum of Understanding and the establishment of a Joint Working Group for space cooperation 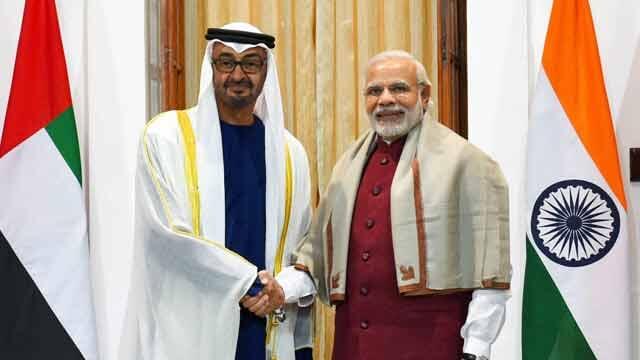 There is a renewed vigour to set up such a mechanism on a bilateral level. Ministry of External Affairs is working to evolve a new arrangement that would make the recruitment process more transparent. India and UAE signed a MoU in the field of Manpower Sourcing in December 2006 and a Protocol to streamline the admission of Indian contract workers by way of an electronic contract registration and validation system was signed. The Embassy also has Indian Community Welfare Fund (ICWF) for providing short term economic assistance (food, shelter, passage expenses etc.) to destitute workers/housemaids in distress.

UAE lights at the heart of Gulf, a sub-continent hosting no less than 7 million citizens, sending in remittances of $40 billion annually. They also play a crucial role in our energy security. With dipping oil prices, the laws of economy says the buyers have a better say in oil trade. Hence, India is in a position to proactively engage, if not dictate, with the federation, to further our interests in the region.