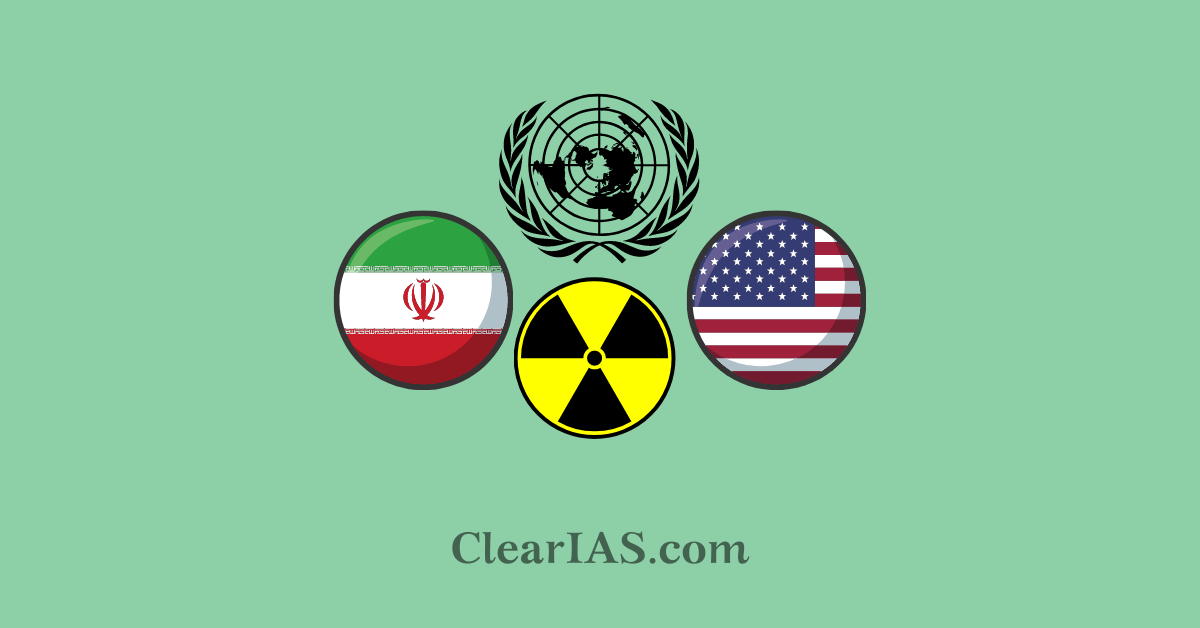 What is the Iran nuclear deal or the JCPOA? What is the background of the deal? What was the role of the USA in the JCPOA deal? How successful was the Iran Nuclear Deal? Read to know more.

Why in news: Iran, Russia, China, and the European countries have resumed negotiations in Vienna to revive the 2015 Joint Comprehensive Plan of Action (JCPOA) nuclear agreement.

Background of the Iran nuclear deal:

The Shah of Iran signed the Treaty on the Non-Proliferation of Nuclear Weapons (NPT) in 1968 as a non-nuclear weapons state and ratified the NPT in 1970.

Later, Iran received assistance in its nuclear program from the United States as part of the ‘Atoms for Peace’ program.

But Iranian revolution (1963-78) left the country’s nuclear program in disarray as many talented scientists fled the country. The new regime was openly hostile to the United States and thus ended all the assistance from them.

Iran stated that its nuclear program was for peaceful purposes, but Western powers and their allies in the Middle East suspected that this was not the case.

Negotiations between Iran and the western nations took place throughout the 2000s with little progress. Iran even created plants for heavy water and Uranium enrichment which led to economic sanctions from the United States and the European Union.

The Iran nuclear agreement, formally known as the Joint Comprehensive Plan of Action (JCPOA), is a landmark accord reached between Iran and several world powers, including the United States, in July 2015.

Under its terms, Iran agreed to dismantle much of its nuclear program and open its facilities to more extensive international inspections in exchange for billions of dollars worth of sanctions relief.

The JCPOA went into effect in January 2016. It imposes restrictions on Iran’s civilian nuclear enrichment program. The negotiations with Iran were carried out by the five permanent members of the UN Security Council (China, France, Russia, the United Kingdom, and the United States) and Germany, collectively known as the P5+1. The European Union also took part.

The deal was proposed so that it would help prevent a revival of Iran’s nuclear weapons program and thereby reduce the prospects for conflict between Iran and its regional rivals, including Israel and Saudi Arabia.

However, the deal has been in trouble since President Donald Trump withdrew the United States from it in 2018. In retaliation for the U.S. departure and deadly attacks on prominent Iranians in 2020, including one by the United States, Iran has resumed some of its nuclear activities.

Goals and agreements of the deal:

The P5+1 wanted to unwind Iran’s nuclear program to the point that if Tehran decided to pursue a nuclear weapon, it would take at least one year, giving world powers time to respond.

For Iran, it sought the JCPOA for relief from international sanctions, which starved its economy of more than $100 billion in revenues in 2012–2014 alone.

Agreements accepted by the P5+1 and others

How successful was the deal?

The agreement got off to a fairly smooth start. The IAEA certified in early 2016 that Iran had met its preliminary pledges; and the United States, EU, and United Nations responded by repealing or suspending the sanctions.

Most significantly, U.S. President Barack Obama’s administration dropped secondary sanctions on the oil sector, which allowed Iran to ramp up its oil exports to nearly the level it was before sanctions. The United States and many European nations also unfroze about $100 billion worth of frozen Iranian assets.

But the Trump administration’s withdrawal from the deal jeopardized everything after that.

Iran started exceeding agreed-upon limits to its stockpile of low-enriched uranium in 2019 and began enriching uranium to higher concentrations (though still far short of the purity required for weapons).

It also began developing new centrifuges to accelerate uranium enrichment; resuming heavy water production at its Arak facility; and enriching uranium at Fordow, which rendered the isotopes produced there unusable for medical purposes.

2020: Iran took more steps away from its nuclear pledges, following a series of attacks on its interests.

2021: Iran announced new restrictions on the IAEA’s ability to inspect its facilities, and soon after ended its monitoring agreement with the agency completely.

What is the current status of the agreement?

The fate of the Iran nuclear deal remains uncertain. Biden has said the United States will rejoin the agreement if Iran returns to compliance, but has also said he wants to negotiate a broader agreement that addresses Iran’s other activities, such as its missile program. Meanwhile, Raisi has said Washington has to return to the original deal.

In April 2021, JCPOA signatories began talks in Vienna to bring Washington and Tehran back into the deal, but the negotiations stalled after Raisi’s election.

Challenges to the restoration of the Iran nuclear deal:

Impact on India of restoration of the deal: