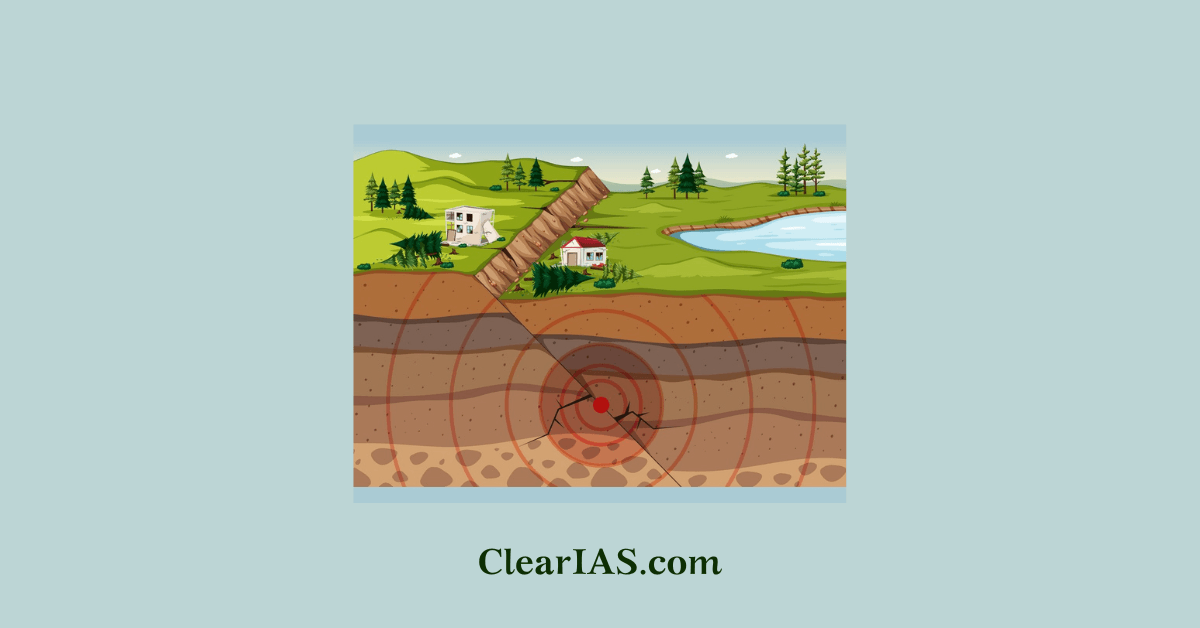 Joshimath, a vital hub for travelers heading to Badrinath and Hemkund Sahib, saw fissures in the ground as a result of land subsidence, which sparked alarm and demonstrations among the local populace. What is Land Subsidence? How does it impact the daily life of people? Read further to know more.

Land subsidence is defined as the downward, vertical movement of the Earth’s surface, which can be brought on by both natural and human forces. Land subsidence differs from slope movement in that it requires little to no horizontal movement.

Subsidence can be caused by mining, pumping subsurface fluids like groundwater or petroleum, or tectonic forces that bend the Earth’s crust.

These processes include groundwater dissolving underlying carbonate rock, gradual compaction of sediments, withdrawal of fluid lava from beneath a solidified rock crust, and pumping subsurface fluids like groundwater or petroleum.

Tectonic subsidence, which results from the crust’s tectonic deformation, can provide space for sediment to build up and eventually lithify into sedimentary rock.

Geologists, geotechnical engineers, surveyors, engineers, urban planners, landowners, and the general public are all concerned about ground sinking on a global scale.

The following are the causes of land subsidence.

In karst terrains, where the degradation of limestone by fluid flow in the subsurface forms voids, subsidence frequently results in significant issues (i.e., caves).

Sinkholes that can be hundreds of meters deep can be created by this form of subsidence.

Surface subsidence is a result of a number of subsurface mining techniques, particularly those that deliberately induce the extracted void to collapse such as pillar extraction, longwall mining, and any metalliferous mining technique that includes “caving,” such as “block caving” or “sub-level caving”.

Mining-related subsidence generally always only affects the region immediately above the mined area and a margin on all sides.

The worst damage to the natural environment, structures, and infrastructure is typically caused by the associated surface compressive and tensile strains, curvature, tilts, and horizontal displacement rather than the vertical magnitude of the subsidence itself, with the exception of drainage (including natural drainage).

Extraction of Petroleum and Natural gas

The initial pressure in a natural gas field, which can reach 60 MPa (600 bar), will decrease over time if natural gas is collected from it.

The soil layers above the field are supported by pressure. If the gas is extracted, the compacted sediment caused by the overburden pressure could cause earthquakes and ground subsidence.

Petroleum extraction can also result in considerable subsidence. Over the course of 34 years of petroleum extraction, the city of Long Beach, California, has seen 9 meters (30 ft) of elevation change, causing over $100 million in damage to the area’s infrastructure.

Another cause of land subsidence is the settling and compacting of loose sediment brought on by an earthquake’s shaking.

The sinking of land caused by the extraction of groundwater is referred to as groundwater-related subsidence.

Without sufficient pumping control and enforcement, it is becoming a bigger issue in developing countries as cities’ populations and water usage rise.

According to one estimate, excessive groundwater extraction is to blame for 80% of major land subsidence issues, making it a global issue that is getting worse.

The degradation of organic matter can also be indirectly impacted by changes in groundwater levels. Lowlands, like coastal or delta plains, need to be drained in order to support human habitation.

The resultant oxygenation of the soil causes its organic constituents, including peat, to oxidize, and this process of decomposition may result in severe land subsidence.

In order to maintain ideal unsaturated zone depths and expose more and more peat to oxygen, this is particularly true when groundwater levels are frequently adjusted to subsidence.

When there are differential stresses in the Earth, they can be accommodated either by ductile flow in the hotter and more fluid mantle or by geological faulting in the brittle crust.

Absolute subsidence may happen in the normal faults’ hanging wall where faults are present. The footwall can be used to measure relative subsidence in reversal or thrust faults.

Clay is present in large amounts in many soils. Changes in the moisture content of the soil have an impact on them because of the very small particle size.

The volume and surface of the soil are reduced as a result of seasonal drying. Building foundations move if they are over the level attained by seasonal drying, which could cause damage to the structure in the form of tapering cracks.

The seasonal drying of soils can be significantly influenced locally by trees and other vegetation. As the tree matures over several years, a cumulative drying takes place. When the tree deteriorates or is cut down, this may result in the reverse of sinking, known as heave or expansion of the soil.

Land subsidence has occurred in Joshimath as a result of the town’s geological location and the haphazard and widespread development that has taken place there and nearby.

Because Joshimath was constructed over the remnants of a previous landslide, even small triggers might cause the slopes to become unstable.

In India’s seismic zonation plan, the town is also in Zone V, which denotes the highest danger.

It occupies a seismically active terrain because it is sandwiched between the Main Central Thrust (MCT) and the Vaikrita Thrust (VT).

Joshimath is additionally vulnerable to severe weather because it is climatologically located in an area that commonly experiences concentrated, high-intensity rains.

Extreme rainfall, for instance, might cause landslides because of how dangerously balanced the slopes are.

Joshimath is a sand and stone deposit, thus it was not a good location to build a city since vibrations from blasting and excessive traffic would also cause natural variables to be out of balance.

561 homes have reported cracks, and at least 66 families have left the area. According to a government official, more than 3000 people have been impacted thus far.

The following are the various solutions

Using methods like terracing or erecting retaining walls, slopes can be stabilized in order to prevent landslides and erosion.

Vegetation planting on slopes can aid in soil stabilization and erosion prevention. Slope stabilization is particularly effective with trees and other deep-rooted plants.

In hilly areas, it is crucial to effectively manage and maintain drainage systems since poor drainage can cause the land to sag. Installing culverts or other drainage systems may be necessary to direct water away from slopes and stop erosion.

Buildings in mountainous communities may occasionally need to have their foundations reinforced in order to stop them from sliding or collapsing. This can entail adding strength to the foundations or underpinning them.

With careful planning and zoning, structures can be kept out of locations that are vulnerable to landslides or erosion. In order to do this, certain regions could need to be declared no-build zones or high-risk areas might need to use special construction methods.

Due to the slow progression and regional nature of ground subsidence, it is simple for people from all walks of life to become unaware of its negative effects, and there is still room for improvement in the general public’s understanding of the significance of ground settlement prevention and treatment.

To achieve this, we should intensify our public relations and education efforts to better inform the public about the risks that land subsidence poses to the nation’s economy, society, and way-of-life, and to increase the general public’s comprehension of and support measures to prevent and control it.