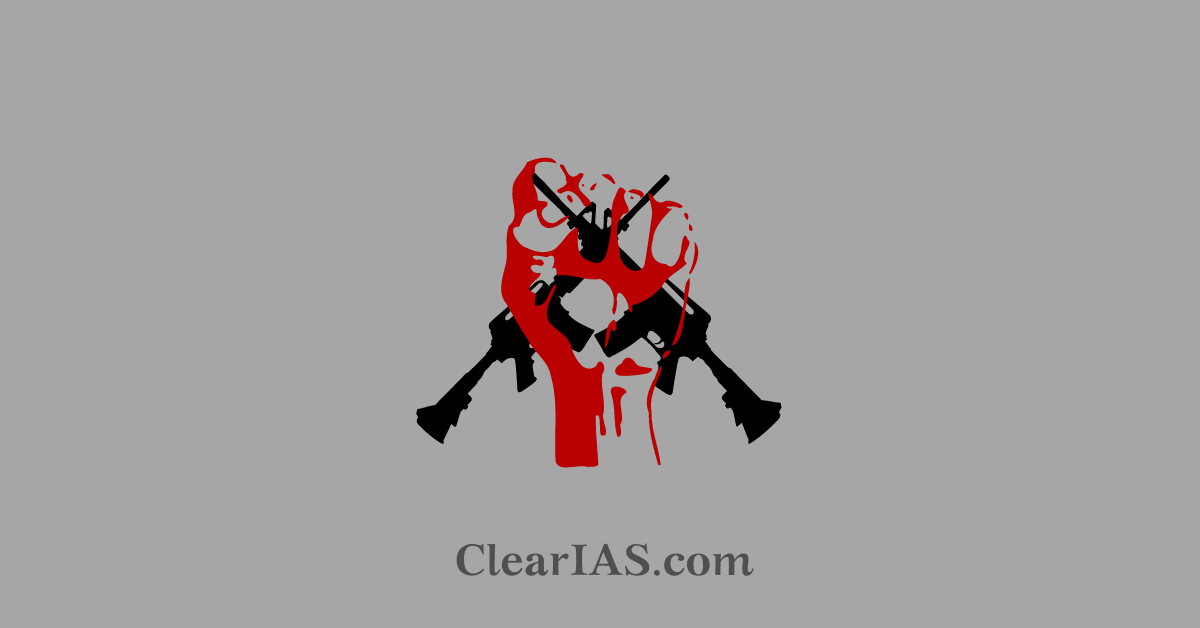 Development and extremism have been linked to each other in a complex manner. Read here to understand the concept better.

All people are entitled to an improvement in their standard of living with adequate food, clothing, housing, quality education, health, and a dignified way of life.

History has shown us that the lack of these necessities incites people to revolt as they did against the colonial authorities. The lack of development led to extremist means being adopted by the common people to assert their rights.

It is a fact that underdevelopment creates the conditions for insurgency and the spread of extremist ideologies among the people, who become aware that their needs are not being taken care of by the government.

It has been the policy of governments around the world today to emphasize inclusive development, but there are always groups in every state who feel alienated because they feel left out of the developmental efforts.

These perceptions combined with inefficient and corrupt governance create the condition for extremism and militancy to grow. The absence of efforts, misgovernance, and the inability of the system to include the marginalized communities lead to violence and extremism more than the actual lack of development.

In the context of India, left-wing extremism or Naxalism is a prime example of development and extremism, being interrelated.

Under development and left-wing extremism

Left-wing extremism (LWE), or Naxalism is a far-left extremist ideology. It derives its ideas from communism and emphasizes the progress of people’s social and economic lives through armed revolution to create a classless society.

Naxalism had its origins in the town of Naxalbari in West Bengal in 1967 as an agrarian movement. The oppressed peasants inspired by the communist movement raised their voices and arms against the feudal landowners in Naxalbari.

Naxalism originated as a rebellion against the lack of development and poverty at the local level in the rural parts of eastern India.  It is also important to understand that emergence of Naxalism is a result of the various fragmentations of communist ideologies in India over time.

The creation of the Communist Party of India (CPI) in the 1920s consolidated the presence of communist ideology in the country. The communist movements all around the world at that time inspired CPI to use the sentiment in the national movement against the British.

The success of the October Revolution in Russia became a source of inspiration for the nascent communist movement in India.

The agrarian revolution began in West Bengal in 1967 when an extremist breakaway faction of the Communist Party of India Marxist (CPM) began the agitation.

In 1969, the CPI formed a new Marxist-Leninist party; CPI-ML. This faction spearheaded acts of violence in the name of ‘class destruction’ began in of states of West Bengal, Andhra Pradesh, Kerala, Bihar, and Uttar Pradesh, as well as Orissa, Madhya Pradesh, and Punjab.

In 2004, CPI- Maoist was created which had far-left radicals supporting Maoist ideology. The Naxals followed this ideology which eventually turned violent with the use of arms and ammunition.  Initially, the movement had its center in West Bengal. Thereafter, it spread into less developed areas of rural central and eastern India, such as Chhattisgarh, Jharkhand, Odisha, and Andhra Pradesh through the activities of underground groups like the Communist Party of India (Maoist).

Maoism: Maoism originated in China as a form of Communist theory derived from the teachings of the Chinese political leader Mao Zedong. It was widely applied as the political and military guiding ideology of the Communist Party of China till 1977-78. It emphasized the advancement of people’s social and economic life by establishing a classless society through the armed revolution. It was rooted in the anti-imperialist struggle and supported the armed revolution to achieve political transformation. Naxalism is based on the principles of Maoism to achieve a similar transformation in India.

Insurgency is another example of development and extremism being related. The partition of India turned the North-East region into a landlocked region and affected it developmentally and economically. Due to this isolation from the mainland, the region remained backward in terms of development and growth.

The isolation of the region, its complex social character of different ethnic tribes, their culture, lack of development, and miscommunications between the central administration soured the relationship between the centre and this region, which led to anger in people in this region.

Due to these complicated issues, people aspired for their autonomy, secessionist movements & strict opposition to outsiders entering their region.

Relation between development and extremism

The Naxalite movement is largely considered the country’s single greatest threat to its internal security.

Maintenance of law and order is the responsibility of state governments, but the central government has deployed CRPF troops in these areas and they act as support systems for state police.

Insurgencies in Jammu and Kashmir and northeast states have been dealt with with the implementation of AFPSA (Armed forces special power act), but the Naxal infested areas are not included in this.

Grey Hound Police: They are an elite commando force of Andhra Pradesh created to combat left-wing extremists. The Force is known for its guerrilla approach and its functioning in the field, which is near similar to that of the Maoists.

Operation Green Hunt: It was the name used by the Indian media to describe the “all-out offensive” by the government of India’s paramilitary forces and the state’s forces against the Naxalites. The operation is believed to have begun in November 2009 along with five states in the Red Corridor.

Salwa Judum: It was described as a People’s movement and meant, “Peace hunt” in the local Gondi tribal dialect. The movement was launched by a few villagers angered by Naxal interference in the local trade of tendu leaves used for making bidis.

A security blueprint to tackle the Maoist threat was prominently featured in the government’s 14-Point Policy and subsequently took the form of a series of security-centric measures to address the growing Maoist movement:

Peace Talks with Maoists and ceasefires

But there is no effective intelligence mechanism to identify Naxal cadres. Often, tribal youths surrender as Naxals after many of them joining the Naxal movement to reap these benefits.

Lives claimed by Naxalism have come down drastically in recent years due to better center-state cooperation hence the areas are seeing better growth and the basic needs of people are being addressed.

General elections are being concluded peacefully and even districts of Bastar and Dantewada which were hotspots of Naxal activity too voted in reasonably good numbers.

This indicates the situation is under control for the time being, but the government cannot be complacent until it is uprooted completely. There are still surprise attacks where that inflict substantial damage on the paramilitary forces. The vigor of the attack suggests that they are not demoralized, but it appears that they are waiting for the right time to raise their head. So the government instead of being reactionary must go after them proactively. But it has a herculean challenge of doing it democratically.

There should be a two-pronged approach to counter it, one at the ideological level and the other at the physical level. In the former case, good governance by the government and delivering good results in fields of Education, Health, and overall standard of living will be instrumental.

Development and decline of extremism

It is vital to strengthen the state’s protective shield against the multi-faceted exploitation of these populations. The constitutional and civil rights protections related to legislation should be made more effective concerning Schedule castes and scheduled tribes.

Land-related policies should be made more accessible to the vulnerable sections of the agrarian society. The development of beneficial land policies will improve food and livelihood security, and lesser actions of extremism.

The Red corridor has a high number of tribal populations who have serviced inadequately the government. More inclusive schemes and policies for their benefits are needed. Their development is imperative to curbing extremism in the region.

Security of livelihood can be ensured by establishing quality infrastructure, supportive technical services, and efficient market linkages at the village or cluster of village level to promote subsidiary and supported activities in animal husbandry, fisheries, horticulture, sericulture, and poultry.

The state should ensure more development work and its practical implementation on the ground at high priority, which would necessitate a clean, corruption-free, and accountable administration at all levels. As discussed, development and extremism are intricately related and should be addressed through the same lens.

National Rural Employment Guarantee Act (NREGA), 2005, Scheduled Tribes and Other Traditional Forest Dwellers (Recognition of Forest Rights) Act, 2006, and National Rehabilitation & Resettlement Policy, 2007 are some of the policies that have been enacted and should be monitored for quality implementation.

The National Rural Employment Guarantee Act (MGNREGA) is a critical component in ensuring that the poorest of the poor have access to livelihood support and protection.