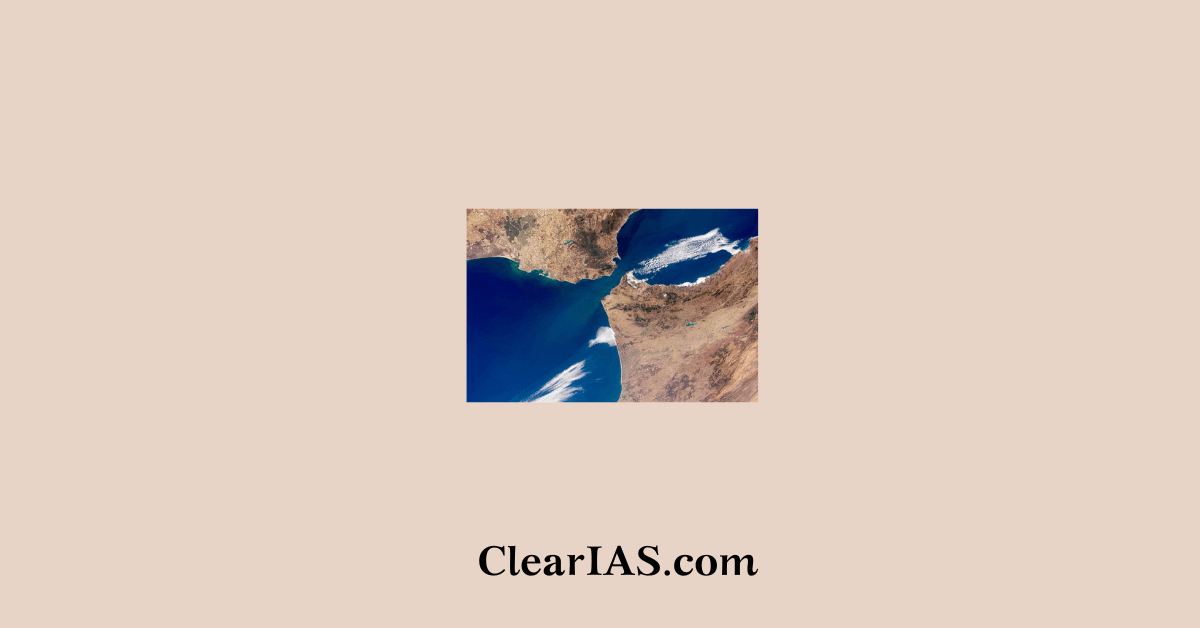 What are straits? How straits are formed? What is the significance of straits? What are the differences between Gulf and Strait? Which are the major straits in the world? Read here to know more about Straits.

In March 2021, the Suez Canal was blocked for six days after the grounding of Ever Given, a 20,000 container ship. On 28 March, at least 369 ships were queuing to pass through the canal. This prevented an estimated US$9.6 billion worth of trade. This shows the importance of straits and canals in world trade.

Strait is a naturally formed, narrow, typically navigable waterway that connects two larger bodies of water. Most commonly it is a channel of water that lies between two landmasses. Some straits are not navigable, for example, because they are too shallow, or because of an unnavigable reef or archipelago.

How straits are formed?

It is possible that the narrow-shaped isthmus fracture will result in straits. It connects different water bodies. According to legend, straits occur as a result of plate tectonic activity. For instance, the tectonic activity in Africa is what created the Strait of Gibraltar.

It is a breakdown of the Gibraltar Isthmus. However, human activity also creates straits which are named canals. It is used for directing water flow for domestic and commercial consumption. One such strait is Suez Canal, built-in 1869.

Between the Mediterranean and the Red Sea, it serves as a watershed. Originally constructed for commerce, it today serves as a waterway connecting Europe and Asia. Without a watershed, one would have to travel into Africa to convey goods, which lengthens the journey time. Therefore, certain straits are constructed to stimulate commercial activity.

Straits can also created when water bodies flood. Straits are also formed as a result of erosion and landslides. The Bosporus connects the Black Sea to the Aegean Sea. Bosporus was created as a result of weathering and erosion occurring naturally. As the only physical boundary between the continents of Europe and Asia, the Bosporus is crucial for geologists.

What is the significance of straits?

Differences between Gulf and Strait

Gulfs and Straits have been considered geographical features on the earth’s surface. Both gulfs and straits are part of the water body.

Gulf refers to an inlet within the sea which is deep and has a narrow opening. Gulf refers to the portion of the ocean which penetrates within the land. It can be different in shape, deepness and size.

Straits refer to a narrow waterway that acts as a connector toward a large water body. The connector is a link between two watersheds; hence, it is formed due to a fracture of the isthmus. Straits are generally formed due to tectonic shifts.

Some of the major straits in the world

Important geological features created by biological processes include the gulf and straits. However, the differences may be distinguished by their size, shape, and depth in addition to other characteristics. The gulf is a sea portion that penetrates with the landmass while straits are surrounded by ocean on all sides. The Gulf has a narrow opening while the entire shape and size of the strait is narrow. Both are used for trade and commercial purposes