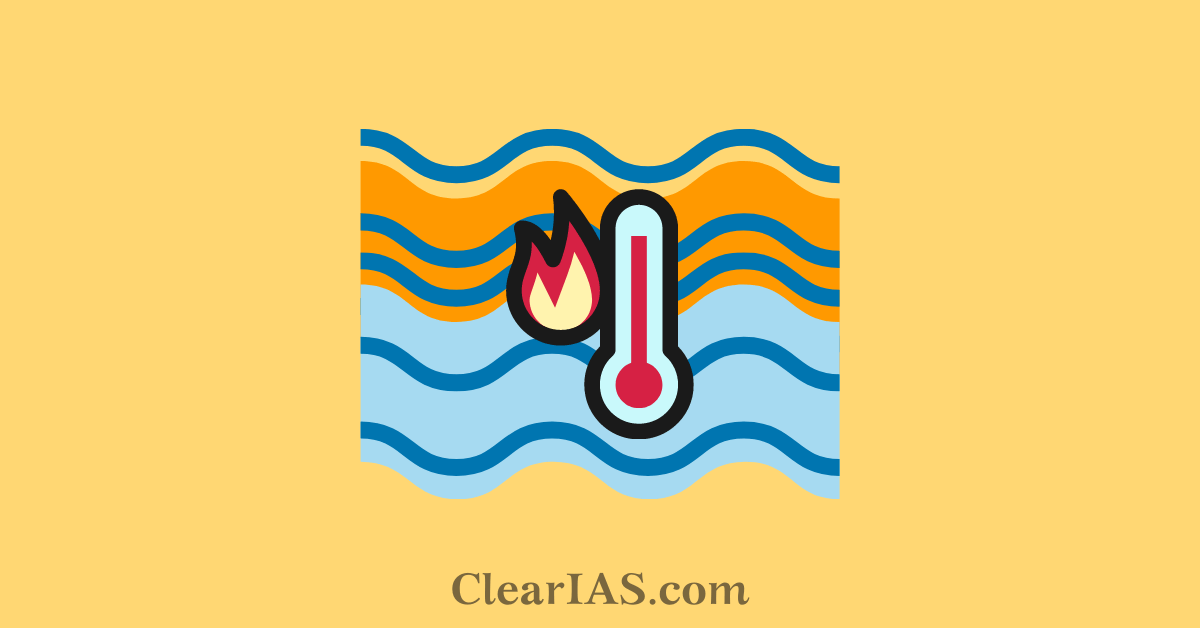 These are called marine heatwaves.

Marine heatwaves are periods of extremely high temperatures in the ocean.

This phenomenon causes ocean temperatures to be extremely warm for an extended period that can have significant impacts on marine ecosystems and industries.​

These can occur in summer or winter.

The most common drivers of marine heatwaves include:

How are marine heatwaves measured?

A marine heatwave is defined as when seawater temperatures exceed a seasonally-varying threshold for at least 5 consecutive days. Successive heatwaves with gaps of 2 days or less are considered part of the same event.

Properties of marine heatwaves are also utilized to take measures of their occurrence. Properties like:

Impact of marine heatwaves in the Indian subcontinent 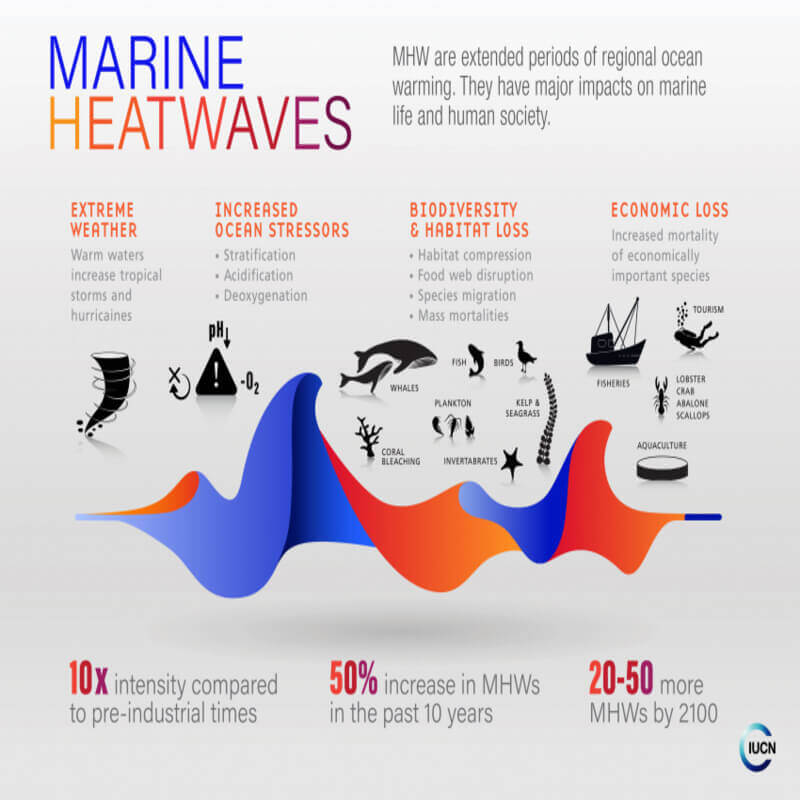 Marine heatwaves affect ecosystem structure, by supporting certain species and suppressing others.  They can change the habitat ranges of certain species. Many animals tend to deter from their normal range by following the warm waters of the heatwave.  The impact on fisheries and aquaculture is also significant.

Emerging studies have reported their occurrence and impacts in the global oceans, but are little understood in the tropical Indian Ocean.

These events are linked to coral bleaching, seagrass destruction, and loss of kelp forests, affecting the fisheries sector adversely.

An underwater survey showed that 85% of the corals in the Gulf of Mannar near the Tamil Nadu coast got bleached after the marine heatwave in May 2020.

The marine heatwaves in the Western Indian Ocean and the Bay of Bengal increased drying conditions over the central Indian subcontinent.

Typically, heatwaves on land are associated with the north and northwest of India and over coastal Andhra Pradesh, north Odisha and parts of West Bengal.

Heatwaves killed 1,422 in Andhra Pradesh and 541 in Telangana in 2015 or about 90% of the national heatwave mortality of that year.

There’s been an increase in the number of affected regions in recent years, with more parts of the Himalayan plains, regions north of Andhra Pradesh and Central India also registering more heatwaves.

Biodiversity can be drastically affected by marine heatwaves. In 2016, such heatwaves across northern Australia led to severe bleaching of the Great Barrier Reef and have been speculated to be linked to mangrove die-offs in the Gulf of Carpentaria.

The oceans are warming at an unprecedented rate. Sea surface temperatures have increased at a rate of nearly 0.6°C per century since 1880 (IPCC AR5).

This warming in turn increases the likelihood of marine heatwaves from occurring.

While marine ecosystems have evolved within a certain coping range and can adapt to conditions slightly outside that range, marine heatwaves manifest as extreme events that lead to ecosystem vulnerabilities.

In a warmer climate, we are more likely to experience these vulnerability-causing extremes. 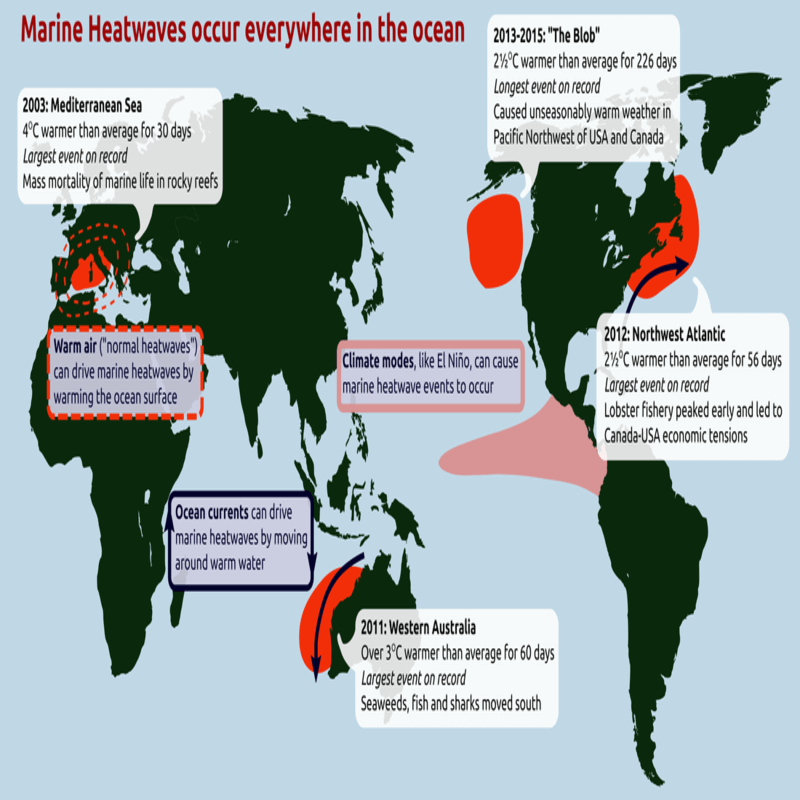 Marine heatwaves have the potential to devastate marine ecosystems and cause economic losses in fisheries, aquaculture, and ecotourism industries. However, their effects are often hidden from view.

By raising general awareness of these phenomena, and by improving the scientific understanding of their physical properties and ecological impacts, there can be a better prediction of future conditions which will help to protect vulnerable marine habitats and resources.

It is necessary to implement measures to slow ocean warming and counteract the impacts of heatwaves in the ocean by building ocean resilience.

Governments must invest in nature-based solutions alongside ambitiously reducing fossil fuel-based emissions to achieve the goals agreed to under the Paris Agreement.

Funding agencies and governments must build research capacity to monitor heatwaves in the ocean, understand their impacts, and predict future heatwave events.

Research should aim to combine physical and biological data to better predict future conditions and highlight biodiversity most at risk.

National and regional governments should design and implement measures to protect communities and build regional ocean resilience. Examples of such measures include creating and protecting marine protected areas to act as refuges for species of coral, kelp, and seagrass; and enforcing catch management or fishing restrictions to help limit economic losses linked to marine heatwaves.