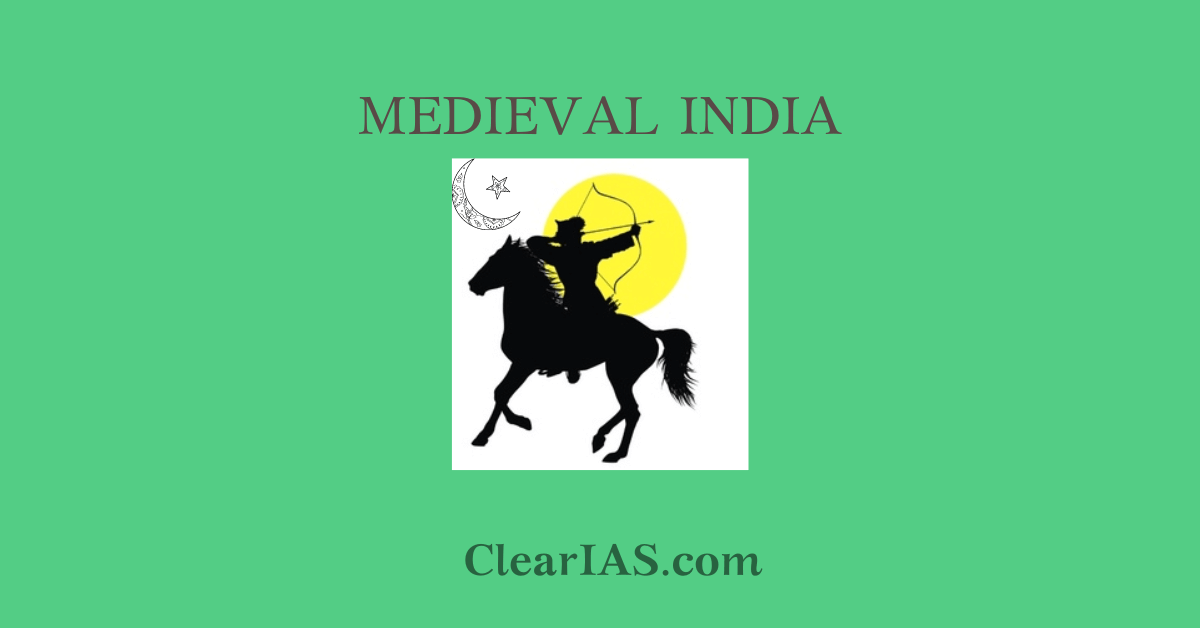 The arrival of Islam in India is dated to medieval times after the decline of Rajput kingdoms in the north. Read here to know about the conquests that brought Muslim rule to India.

During the early 7th Century, there were two major powers outside India and China:

Between 602 and 628 CE, these empires were constantly waging war against each other, and the region around modern-day Iran, Jordan, and Syria was always war-torn.

The long war between these powers came to end with the Byzantines defeating the Persian Sassanid Empire.

During this time, Muhammad (who later became Prophet Muhammad) was born to the powerful Quraysh tribe of Mecca. It is said that he had visions of god and angel Jibril which led him to preach a new religion following only one god, Allah.

The new religion, Islam, slowly brought all the different tribes of Arabia under one roof and united them.

Prophet Muhammad is believed to belong to the time period between 570 and 632 CE. According to the Hijri calendar, the migration of the Prophet and his followers from Mecca to Medina took place in 622 CE.

The conquests to spread Islam reached the doors of the Indian sub-continent during the rule of the Ummayad Caliphate.

The Islamic Conquest of Sind (712 CE) 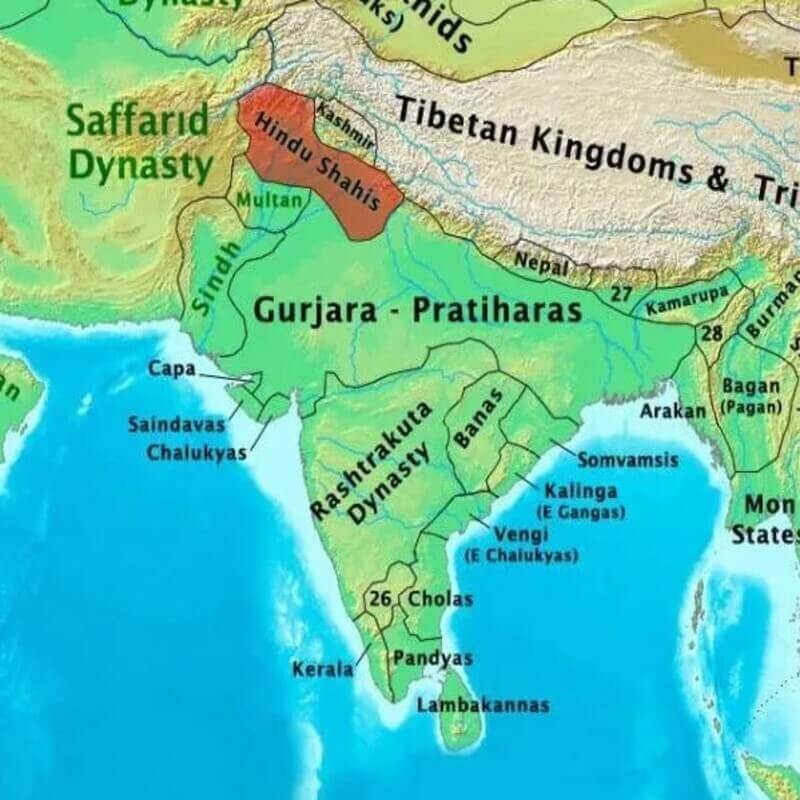 The Umayyad Caliphate sent his 18-year-old nephew, Muhammad Bin Qasim to attack the areas beyond Baluchistan.

He attacked and defeated the Chachaa ruler of Sindh, Dahir, and established Arab rule over Sindh, from where later conquests erupted.

By the end of the 9th century, the Abbasid Caliphate started declining and the farther regions of the kingdom start to become independent.

The age is known as the end of the Arab culture of learning and science. The Arabs were replaced by Turks from Central Asia (Turkestan) ruling over many Islamized states.

The Turkish tribesmen brought with them their habit of looting and plunder, as was prevalent in Central Asia (Like in the ancient era, India faced invasions from the Kushans, and Sakas,  Huns, from Central Asia). They believed in pagan gods.

But over the years, in between enumerable wars, the Turks were slowly converted to Islam and a new class of soldiers was developed amongst them called the Ghazi, who was fierce soldiers and religious missionaries as well. 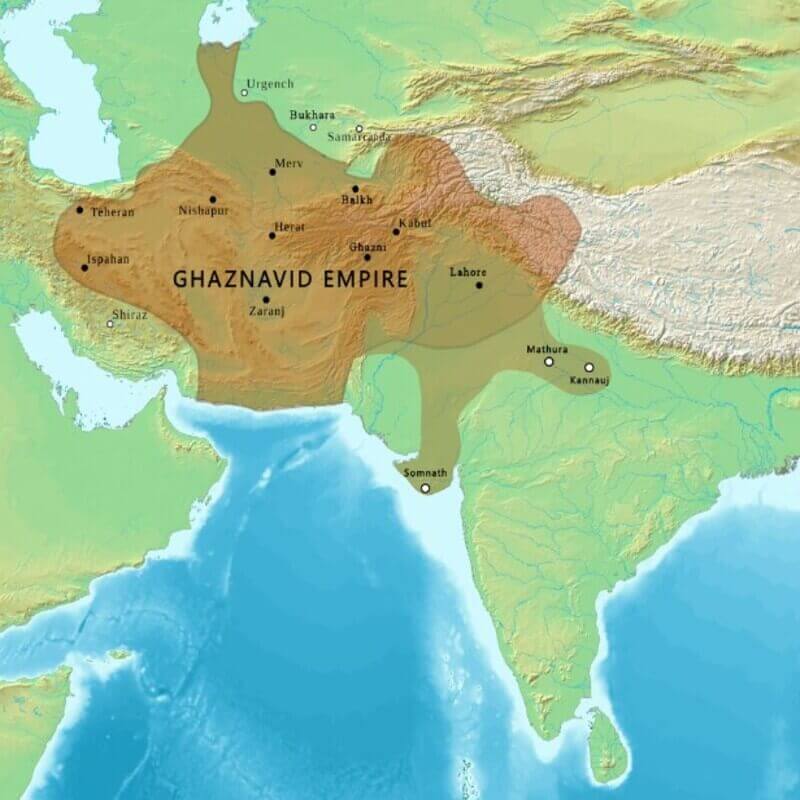 The Samanid kingdom soon ended and the Ghaznavids took up the task of ‘defense of Islam’.

His son, Sabuktigin (977-998 CE) became completely independent in 988 CE. He was later known as Mahmud of Ghazni. He defended the Afghanistan region from the Turkish tribal invaders of Central Asia.

The arrival of Islam in India

Mahmud attacked India 17 times over his period of reign. He initially attacked the Hindushahi rulers of Peshawar and Punjab and even the Muslim rulers of Multan (established by Muhamad bin Qasim).

Battle of Waihind (1008-09): This was fought near Peshawar between Mahmud and Hindushahi ruler Anandapala who was in alliance with the ruler of Multan and the Khokars tribe of Punjab.

Mahmud’s most dreadful attacks on India were:

However, Mahmud did not annex these states but marched from Multan to Somnath, through Rajputana, without encountering any resistance.

Mahmud died in 1030 and was succeeded by his son Masud. But Masud could not maintain the kingdom and was defeated by the Seljuk Turks.

Ghaznavids lost most of their territories and ruled only in Punjab and Ghazni. But they continued their raids of India.

A Persian scholar, Al-Biruni came to India with the Ghaznavids and wrote the book Kitab-ul-Hind or Tahqiq-i-hind, describing the society, culture, and kingdoms of medieval India.

The Ghaznavid conquests opened the route for the spread of Islam in India as the north-western frontier was breached. The in-fighting between the Rajput Kingdoms gave the Ghaznavids a clear pathway to attack and raid western India numerous times. After the death of Ghazni, many more Islamic conquests comes India’s way, eventually setting up sultanates here.