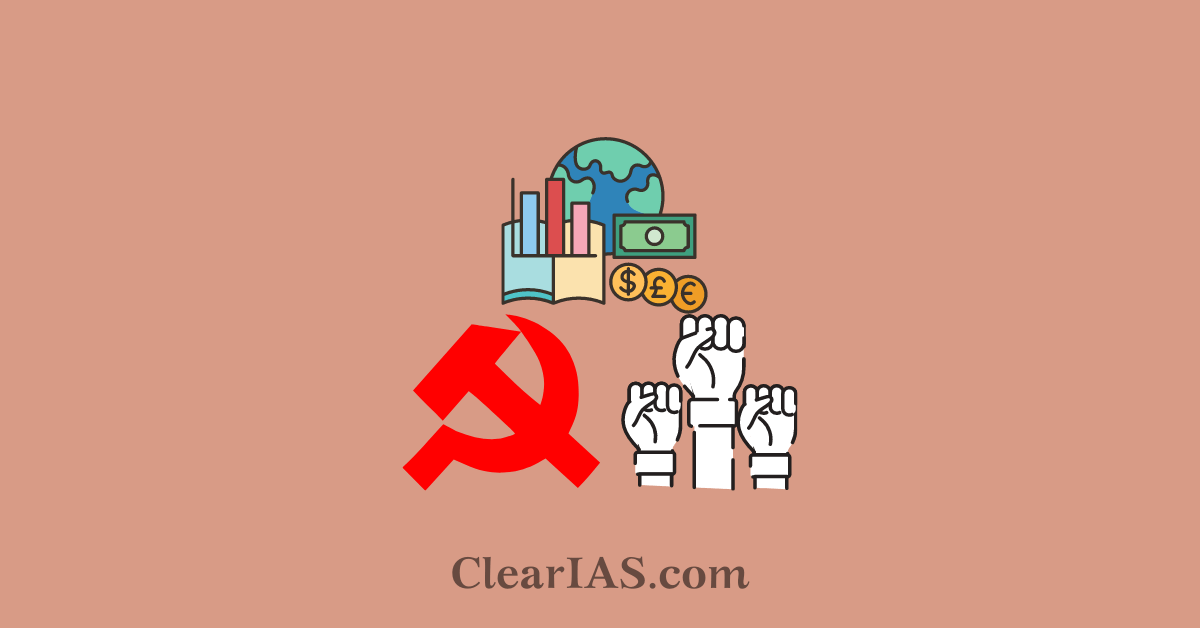 Political philosophies are an integral part of progress since ancient times. Read here to know more about their types and how they affect society.

Political philosophies are the ideals that help us to understand the reasons for the actions taken up by the people in a particular course of time, which impacted the global political setup.

Political philosophy is concerned with the concepts and arguments involved in political opinion. Many types of political ideologies have taken shape over hundreds out of which we will be discussing three philosophies that have played significant roles in the modern world- communism, socialism, and capitalism.

These political philosophies have impacted society in major ways and resulted in pertinent historical changes in the world.

In a capitalist system, the factories fuel the economy, and a wealthy few own the factories. This created the need for a large number of people to work for the factory owners. In this environment, the wealthy few exploited the labourers, who had to labour to live.

From a political perspective, capitalism is a system of laissez-faire (freedom). Lawfully, it is a system of objective laws that is rule of law, in contrast, to the rule of man. In financial terms, when such freedom is applied to the domain of production its result is the free market.

Capitalism was first used by novelist William Makepeace Thackeray, in 1854 in his novel ‘The Newcomes’, where he described capitalism as “having ownership of capital and not as a system of production”.

Effect of capitalism on society

Socialism is a political and economic ideology that believes in the public ownership of means of production and distribution based on a plan formulated by a central authority.

In socialism, the class that produces the wealth can jointly decide how it will be used for the benefit of all. Real socialism is characterized as democratic and it is economic as well as political.

Socialism depends altogether upon the history of mankind for a record of its growth in the past and bases its future upon knowledge of that history in so far as it can be accurately traced up to the present time.

Socialism was initiated in the late 18th-century by a knowledgeable and working-class political movement that disapproved of the effects of industrialization and private ownership on civilization.

The main features of socialism are:

Effect of socialism on society

In layman’s terms, communism is the political system in which the community owns and controls entities like factories, farms, services, etc. intending to treat everyone equally.

Communism is based on the goal of eliminating socioeconomic class struggles by creating a classless and stateless society in which everyone shares the benefits of labour and the community controls all property and wealth.

It is a form of government most closely associated with the ideas of Karl Marx, a German philosopher, which he outlined in The Communist Manifesto (1848).

Marx believed that capitalism, with its emphasis on profit and private ownership, led to inequality among citizens. Thus, his goal was to encourage a system that promoted a classless society in which everyone shared the benefits of labour and the community (communes) controlled all property and wealth. No one would strive to rise above others, and people would no longer be motivated by greed. Then, communism would close the gap between rich and poor, end the exploitation of workers, and free the poor from oppression.

The basic ideas of communism did not originate with Marx. Plato and Aristotle discussed them in ancient times, but Marx developed them into a popular doctrine following modern times, which was later put into practice.

Marx’s ideal society ensured economic equality and fairness. Marx believed that private ownership of property promoted greed, and he blamed capitalism for society’s problems. The problems, he claimed, stemmed from the Industrial Revolution. The rise of factories, the reliance on machines, and the capability of mass production created conditions that promoted oppression and encouraged the development of a proletariat or a working class.

For a large part of the 20th century, about one-third of the world lived in communist countries ruled by dictatorial leaders who controlled the lives of everyone else.

The communist leaders set the wages, they set the prices, and they distributed the wealth. Western capitalist nations fought hard against communism, and eventually, most communist countries collapsed.

Marx’s utopia was never achieved, as it required revolution on a global scale, which never became a reality. As of today, five proclaimed communist countries continue to exist: North Korea, Vietnam, China, Cuba, and Laos.

Effect of communism on society

Today, the historical words capitalism, socialism, and communism do not fully capture the economic systems of nations. New words are also used to describe economic systems- free market system; mixed economy; command economy. In other words, communism, socialism, and capitalism are in sync with modern national economics falling somewhere in the middle, or mixed zone of the different types of economies.

Ultimately, nations and citizens of nations must decide how much government regulation of the economy is appropriate. Therefore, a clear understanding of the historical developments, meaning, political associations, and synonyms of these three words is essential.