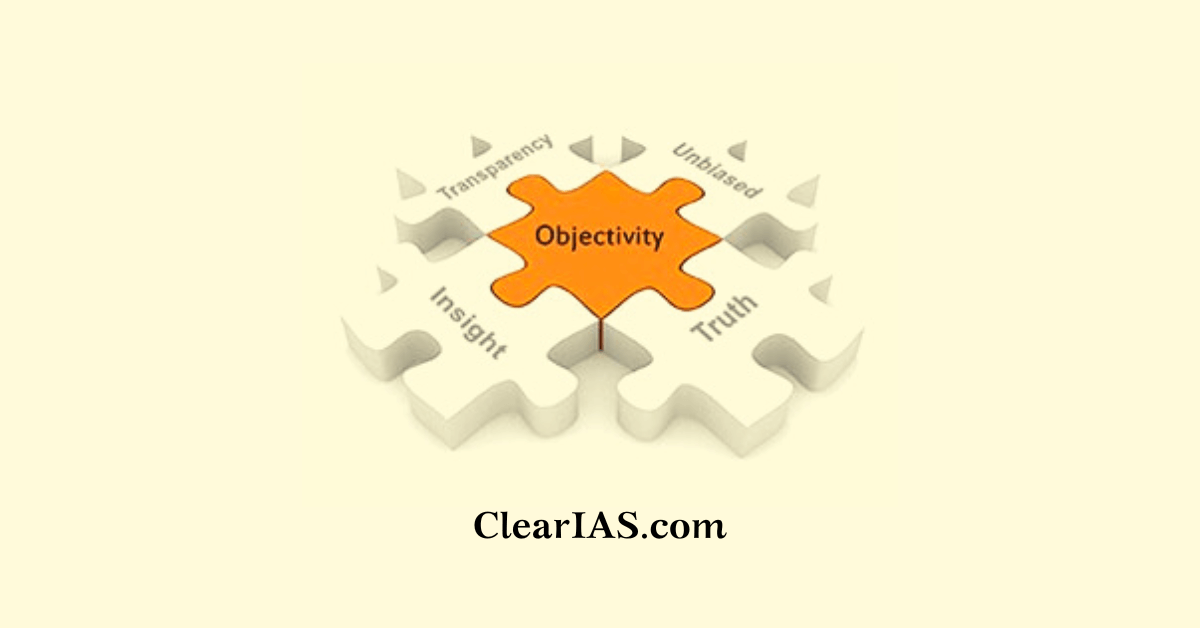 What is meant by Objectivity? How can it ensure good governance? Read further to know more.

The idea of Objectivity is having a reason that is free from personal preferences, feelings, and opinions.

In general, the attribute of being free of bias is referred to as objectivity. It means that something is true and independent of one’s feelings, fantasies, concepts, or philosophical perceptions.

For instance, according to Platonic epistemology, knowledge based on evidence, like that found in mathematics, is objective.

On the other hand, opinions are subjective. Scientific objectivity, also referred to as neutrality is the capacity to assess something using a methodical and factual methodology.

According to the Nolan committee and the 2nd ARC report, objectivity is one of the key qualities in public administration.

Objectivity is recognized as one of the most essential characteristics in governance Since it enables public authorities to make sound judgments based on data.

It enhances other characteristics of good governance like honesty, objectivity, neutrality, empathy, tolerance, and compassion.

In the context of public life, this entails being fair and treating everyone equally in similar circumstances.

Significance of Objectivity in Public Governance

Eg: rescuing those who are most in need during a crisis.

Eg: persuading people who live in slums close to chemical plants to move because their lives are in danger

For example, preserving law and order during ethnic unrest.

Eg: To provide services while upholding equity and inclusivity

Objectivity in the words of Ethical Philosophers

One of the most important ideas of ethics in the history of philosophy is related to objective reality.

Any thorough investigation of the nature of objectivity and objective knowledge should look at both present contributions and the key metaphysical and epistemological stances of the greatest philosophers in history.

Respect for others is given a key role in Immanuel Kant’s ethical system.

His Categorical Imperative, which has had a significant impact, includes a formulation that addresses the dual nature of people.

According to this interpretation, one must “treat humanity, in your own person or in the person of any other, never merely as a means, but always at the same time as an end.”

Kant also argues that a person is distinguished by subjectivity, possesses a subjective point of view, and has a unique moral standing.

Every individual must be valued on their own terms as an end in itself. It appears that a person’s intrinsic worth largely depends on the existence of both an objective existence and a subjective conscious life.

Plato is renowned for having a unique perspective on objective reality.

He essentially argued that the greatest reality was in what he refers to as Forms, or Ideas, rather than the common physical objects we perceive around us.

Aristotle’s notion of objective knowledge is significantly different from Plato’s, but his metaphysics seems to fit our understanding of objective reality more closely than Plato’s did.

According to him, understanding the essences or forms of things is objective knowledge.

Even while we can’t always know something objectively, we can. Individuals may only be known through regular perceptual contact, whereas shapes can be perfectly or eternally known.

Objectives may or may not be subjective, but never the other way around.

For instance, the phrase “climbing mountains is a difficult undertaking” is both subjective and maybe objective.

However, the phrase “Mount Everest is the tallest peak” is objective.

Information that is objective produces the whole truth; that is, it tells a story from all sides in a methodical manner.

It is a verifiable fact that it exists.

Contrarily, subjective data is influenced by the personality of the individual who provides it.

It is a fantastic interpretation or analysis of the facts based on individual viewpoints, opinions, and other factors.

How to Inculcate Objectivity

Although objectivity is important, one must approach with caution and keep both the text and the context in mind in order to come up with the best decision. Because of this, it is argued that pragmatism and objectivism should be combined rather than using a pure form of objectivity.