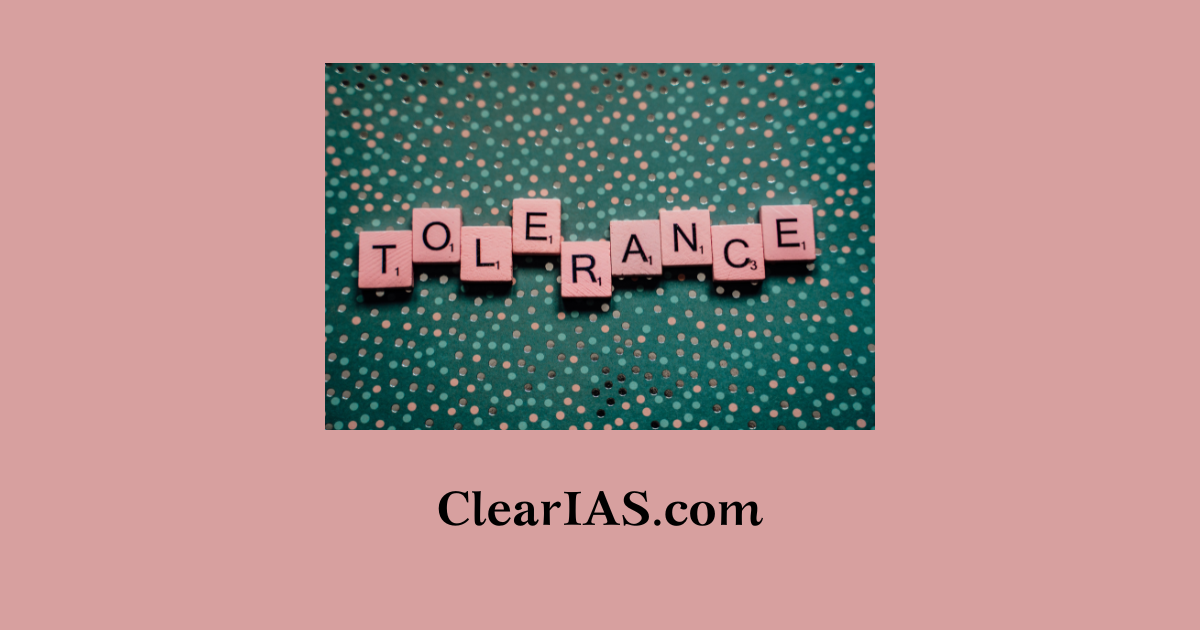 What is Tolerance? Why is it so much important? What is the significance of Tolerance in civil services? These are some of the questions which might be coming to your mind. In the following article, we are going to deal with these questions.

Tolerance is the ability to appreciate, tolerate, and value others who have different beliefs than oneself, regardless of their race, religion, ethnicity, or other characteristics. It equips one with the ability to put up with or accept the existence of ideas or behaviors they disagree with. When one prioritizes important objectives over minor differences, this is achievable.

For instance, a person may disagree with others on any topic, from politics to religion, while still treating them with the utmost respect and recognizing their right to their viewpoints.

In the 16th and early 17th centuries, Akbar the Great, who ruled over the majority of South Asia, rejected intolerance and took ground-breaking measures to ensure that non-Muslims felt at home in their Mughal empire. By closely examining his character and behaviour, it may be seen that Akbar’s actions are in contrast to the current discrimination and violence against weak religious communities around the world.

Following numerous successful military victories, Akbar started to adopt a welcoming policy toward non-Muslims, ushering in a period of religious tolerance based on the Sufi idea of Sulh-e-kul, or “peace to everyone.”

The above story goes back to history showing the level of tolerance prevailing in the Indian subcontinent. Even now we adhere to the principles of tolerance, be it at the individual level, societal level, governance level, or for civil servants, it is desirable everywhere to maintain peace and harmony in the country.

In today’s varied, democratic society, where people have power over “voice” and “choice,” the value of tolerance is recognized more strongly.

Tolerance promotes diversity and individuality. It is less about right and wrong rather than about respect for one another and the greater good.

It enables constructive conversation and debate amongst various sectors, leading to democratic outcomes.

Political intolerance has encouraged disrupting parliamentary procedures, making hateful statements at rallies, etc. It is important to protect each person’s moral worth as everyone has an equal right to express their moral values and should be free to do so.

One learns to respect others and not force their will on others through tolerance. It aids in enlarging our ideas and viewpoint. As an illustration, while most religions do not forbid eating beef, it may be cultural practice for someone else.

The stability of societies cannot be preserved without tolerance and harmony. It supports the freedom of expression, which is essential for progress and the truth. Without it, people are unable to freely express their diverse opinions, and as a result, society would degenerate into the status quo and become uninventive.

It strengthens India’s unity and encourages peace among many linguistic and religious groups, whereas its absence creates trouble like civil war.

Human development is feasible only when everyone is given the freedom to voice their opinions and pursue their interests.

Significance of Tolerance in Civil Services

Civil servants must provide equal service to all segments of our varied community, which is unattainable if they lack tolerance.

If a civil servant posted in a state is not tolerant, he might be facing trouble adjusting and committing himself to serve the people.

It makes sure that government employees don’t use their authority and discretion to harm people and that he is receptive to the thoughts and opinions of others. As a result, the organization’s productivity and workplace culture are enhanced.

It lessens social strife and can handle problems like xenophobia, riots, and religious polarization. To achieve the noble ideal of secularism entrenched in the constitution, tolerance is a virtue. It fosters respect for others and, as a result, provides people the confidence to stand up for their rights, such as the LGBTQ community, minorities, or racial discrimination.

Even among dissidents, it fosters confidence and makes the government appear more legitimate. Additionally, it aids in sustaining security and peace, as stated in our constitution.

It aids in limiting losses and harm by preventing impulsive decisions and actions. It guarantees that the opinions of the powerful are not imposed on the weaker members of society and provides everyone the freedom of thought, belief, and conscience, which boosts public faith in government and strengthens democracy.

Tolerance, according to UNESCO, is the respect for, acceptance of, and admiration of the great diversity of the world’s cultures, as well as our means of expression and ways of being human. Knowledge, transparency, openness, and the freedom to think, conscience, and believe are all supportive factors.

It is a political and legal responsibility in addition to being a moral obligation. The virtue of tolerance, which makes peace possible, helps to replace the culture of violence with a culture of peace.

“SARVA DHARMA SAMBHAV” was suggested by Mahatma Gandhi. He advocates having a respectful and tolerant approach toward all religions because, in his view, all religions are true and without religion, man cannot survive.

Hinduism, Buddhism, and Jainism all have their roots in India. Islam also flourished there and is still practiced by millions of people today. This demonstrates the long history of tolerance in Indian society. The Jain principle of Syaadavanda, states that every viewpoint is correct from its point of view but that no single viewpoint is correct, perfectly encapsulates tolerance.