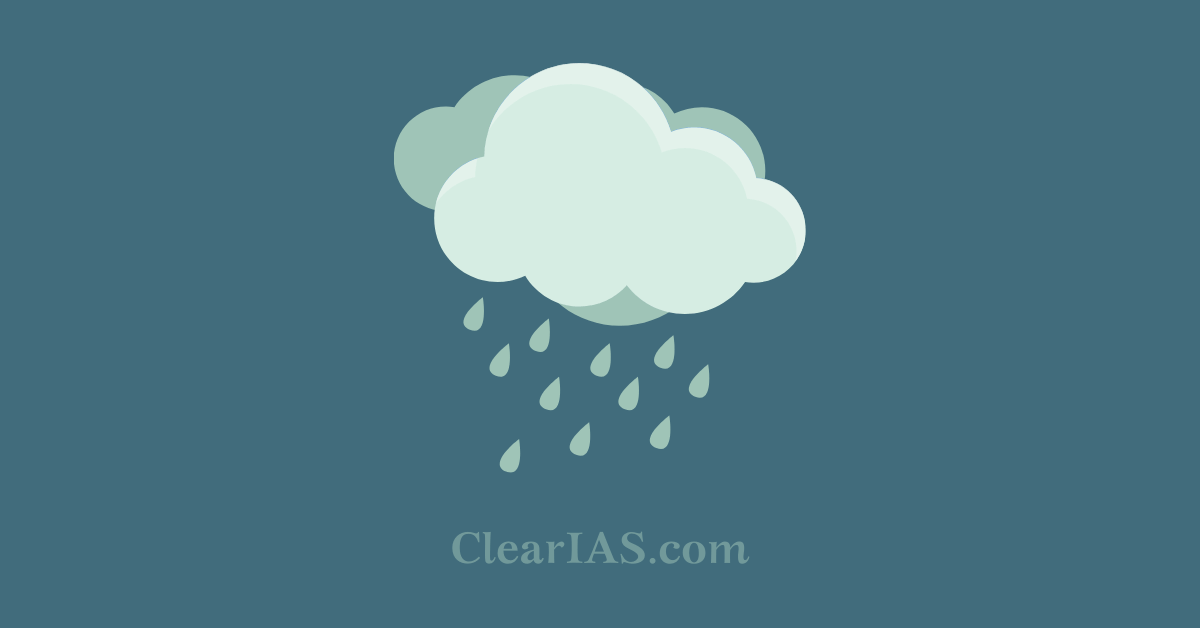 What are Rainfall and precipitation? What are the types of rainfall and how does it occur? Read to know more.

It is a process of falling atmospheric moisture on the surface in any form due to gravity. Precipitation occurs when a portion of the atmosphere becomes saturated with water vapor so that the water condenses and precipitates.

There are five forms of precipitation:

It is the most common form of precipitation, especially in low latitudes. Monsoon or equatorial rains are good examples to understand.

The warm and moist air after being lifted upward becomes saturated and clouds are formed but the process of condensation begins only when the relative humidity of ascending air exceeds a hundred percent.
Rainfall does not occur unless these cloud droplets become so large due to coalescence that the air becomes unable to hold them.

The ground surface is intensely heated due to the enormous amount of heat received. The air in contact with a warm surface also gets heated expands and ultimately rises upward. The ascending warm and moist air cools becomes saturated, causes condensation and cloud formation, and rainfall starts.

India receives convectional rainfall during the summer season before the onset of Southwest monsoon these are known by local names in India like mango showers, Kal Baisakhi, bhardoli cheera, etc.

The rain which is caused by the physiographic barrier for falling in the path of moisture-laden air is known as orographic rainfall. The moisture in the air is forced to rise which gets cooled adiabatically leading to condensation, cloud formation, and rain. This occurs on the windward side of the hill or by any other physiographic barrier like plateau or mountain.

Necessary conditions for the occurrence of orographic rainfall are:

Amount of rainfall depends on:

Orographic rainfall is the most common in the world and India. Rainfall in India through Southwest monsoon and northeast monsoon is orographic.

This occurs due to the convergence of extensive air masses. When two contrasting air masses like cold polar air mass and warm westerly air mass coming from opposite directions converge along a line a front is formed. The warm wind is lifted upward along this front where the cold air being heavier settles down.

Such cyclonic fronts are created in temperate regions where cold polar winds and warm westerlies converge. The warm air lying over cold air is cooled and gets saturated and condensation begins around hygroscopic nuclei.

The lifting of warm air along the cyclonic front is not vertical like convective currents rather it is along an inclined plane.

The front is a zone of intensification of low pressure, cooling condensation, cloud formation, and rainfall- the entire process is known as frontogenesis.

Frontal rainfall is most common in mid-latitudes as it is a zone of convergence of warm westerlies and cold polar easterlies. Frontogenesis is also the basis of the formation of temperate cyclones. Temperate cyclones also produce frontal rainfall in India during the winter season in North-Western parts of India which are known as western disturbances.