What is the Shangai Cooperation Organisation (SCO)? How is it relevant to India’s foreign policy? Read to know more.

What is the Shangai cooperation organisation (SCO)?

The Shanghai Cooperation Organisation (SCO) is a permanent intergovernmental international organisation, created on 15 June 2001 in Shanghai (China). The founding members are:

It was preceded by the Shanghai Five mechanism (1996) formed by the leaders of China, Russia, Kazakhstan, Kyrgyzstan, and Tajikistan.

The SCO Charter was signed during the St.Petersburg SCO Heads of State meeting in June 2002 and entered into force on 19 September 2003. This is the statutory document that outlines the organisation’s goals and principles, as well as its structure and core activities.

The meeting of the Heads of State Council of the SCO in 2017 in Astana gave the status of a full member of the Organization to India and Pakistan.

The SCO’s main goals are as follows:

The Heads of State Council (HSC) is the supreme decision-making body in the SCO. It meets once a year and adopts decisions and guidelines on all important matters of the organisation.

The SCO’s official languages are Russian and Chinese.

The organisation has two permanent bodies- 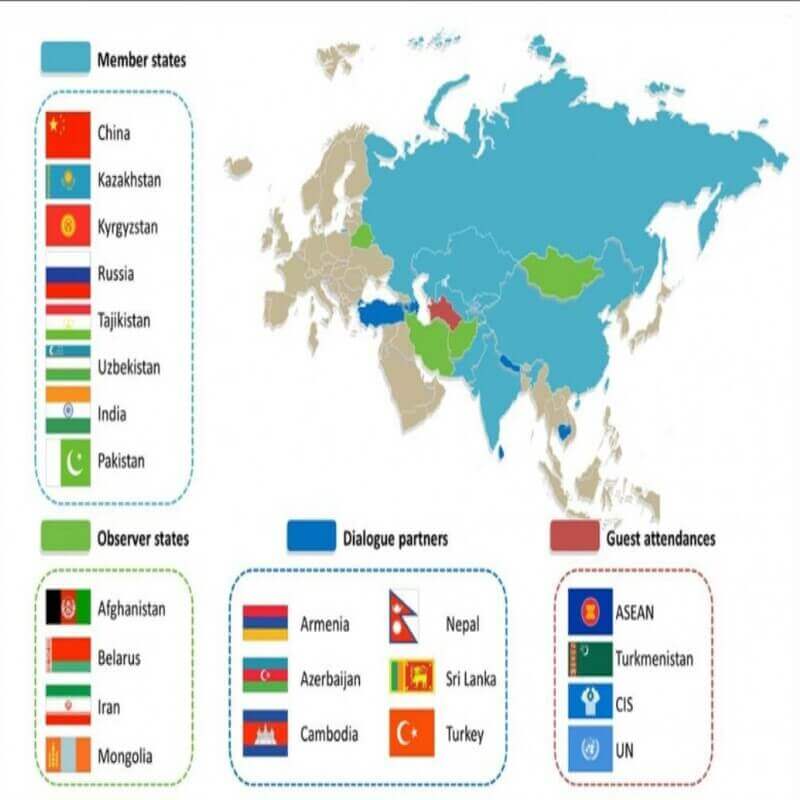 Shangai cooperation organisation (SCO) is seen as an eastern counter-balance to NATO and India’s membership will allow the country to push effective action in combating terrorism and security issues.

The presence of India and China, the world’s most populous countries, makes SCO the organisation with the largest population coverage.

India for the first time hosted the heads of governments (HoG) meeting of SCO, three years after joining the eight-nation group in 2020.

Challenges ahead of India:

The Eurasian strategy should be envisioned to serve India’s regional interests to ensure nation-building through development partnerships, maintaining sovereignty, preventing the region from terrorism and extremism.

Discuss the importance of the Shanghai Cooperation Organisation to India’s Eurasian policy. (200 words)