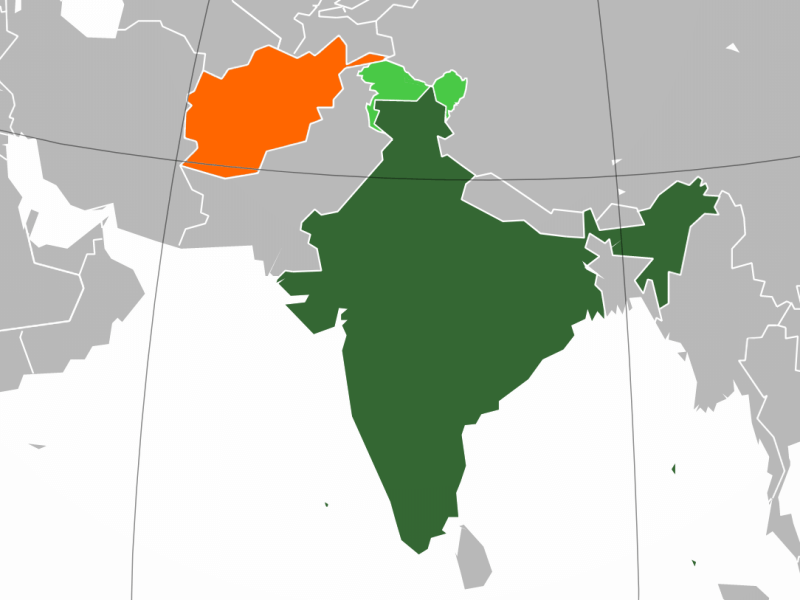 A period of adjustment has become essential following US President Donald Trump’s unilateral announcement that he is pulling US troops out of Afghanistan.

The US withdrawal from Afghan not only affects Indian policy on Afghan but also changes the regional balance of power in fundamental ways.

We should delve into the history of Afghan and India’s role in various stages of this history to grasp the complete relevance of Afghan’s stability for India.

Afghan – a ‘Graveyard of empires’

Afghan is considered as ‘Graveyard of empires’. The fall of Alexander (in Bactria), disintegration of USSR, and the decline of US hegemony were started in this region. There is an ever-growing perception that it is difficult to come out of Afghan quagmire.

The present US situation rings testimony to this quagmire.

Relations between the people of Afghanistan and India can be traced back to the Indus Valley Civilisation. Following Alexander the Great’s brief occupation, the successor state of the Seleucid Empire controlled the region known today as Afghanistan. In 305 BCE, they ceded much of it to the Indian Maurya Empire as part of an alliance treaty. The Mauryans brought Buddhism from India and controlled the area south of the Hindu Kush.

From the 10th century to the mid 18th century, northern India has been invaded by a number of invaders based in what today is Afghanistan. Some of them were Ghaznavids, Khaljis, Mughals, Durranis etc. During these eras, many Afghans began immigrating to India due to political unrest in their regions. 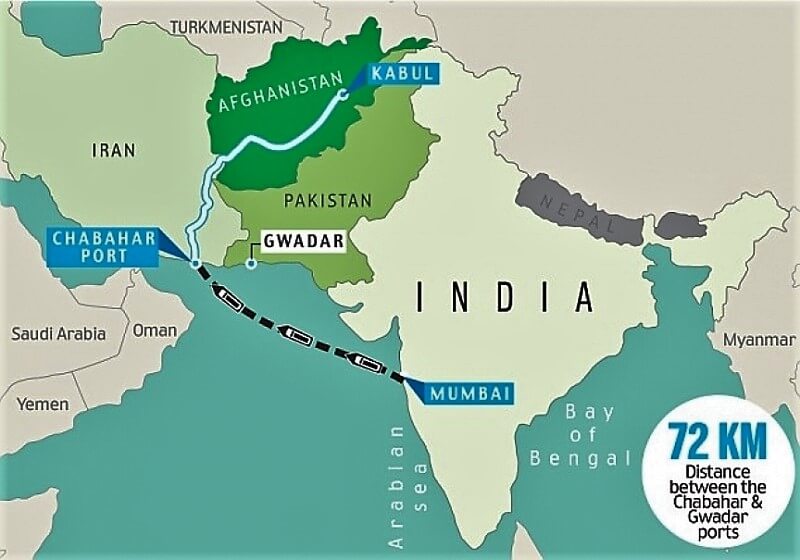 Debate on India’s role in Afghan

There is a debate among major players in Afghan on the optimal role for India in Afghanistan’s reconstruction in light of the enduring security competition between India and Pakistan.

Phase I – until the end of the cold war

Monarchy under King Zahir Shah lasted till 1973 and was overthrown by a coup led by Mohammed Daoud Khan.  He declared Afghanistan as a republic. Against his repressive rule, protest became widespread leading to Communist Revolution or Saur Revolution in 1978 and the Democratic Republic of Afghanistan came into being. The event proved to be the catalyst for decades of unrest and bloodshed in Afghan. There were protests against the Democratic Republic of Afghanistan and to stabilize the communist regime, USSR intervened in 1979.

Meanwhile, US-Pakistan interest coincided in Afghan. After the Iranian revolution, Iran came out of US influence in the Middle Eastern region. So the US was apprehensive of growing Soviet influence in Afghan. Thus CIA-ISI worked together to destabilize the communist government in Afghan, which led to USSR intervention in 1979. The intervention lasted from 1979 to 1989.

Mujahadeen succeeded in toppling communist regime in Afghan in 1989. Mujahadeen was Pakistani supported alliance by seven Afghan Mujahideen parties fighting against the Soviet-backed the Democratic Republic of Afghan forces in Soviet-Afghan war.

Who are the Taliban?

After fall of Mujahadeen government, India together with the international community supported the coalition government that took control, but relations and contacts ended with the outbreak of another civil war, which brought to power the Taliban. The Taliban regime was recognized only by Pakistan, Saudi Arabia, and the United Arab Emirates (UAE). The destruction of the Bamiyan Buddha monuments by the Taliban led to outrage and angry protests by India. In 1999, the hijacked Indian Airlines Flight 814 landed and stayed in Kandahar in Afghanistan and the Taliban were suspected of supporting them. India became one of the key supporters of the anti-Taliban Northern Alliance.

Phase II – since the end of the cold war

Thus from 2001 to present, the Taliban has emerged as an important central player in the Afghan peace process. Now major players like US, Russia, China have accepted this centrality of the Taliban. Since only Pakistan has influence over the Taliban, this turn of events can be considered as a diplomatic victory of Pakistan whereas India is increasingly being sidelined in these proceedings. 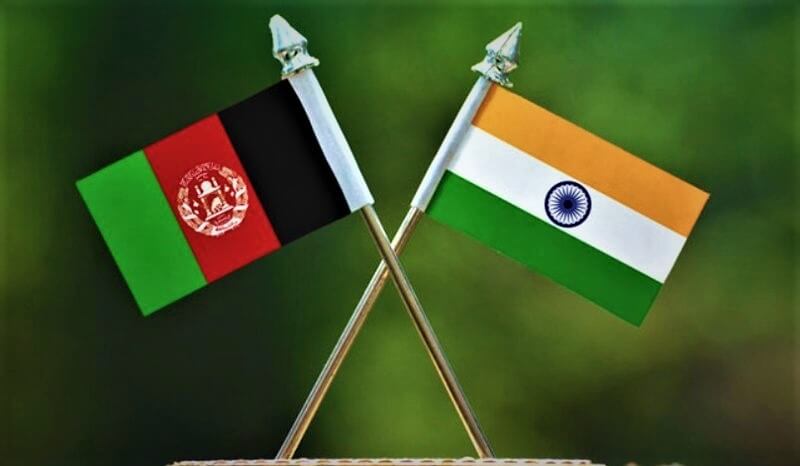 Under the Obama government

New Afghan strategy of US

Under the strategy, the US held back its aid to Pakistan until Islamabad demonstrates action against terrorist groups. However, China came in aid of Pakistan by arguing that Pakistan has also been affected by terrorism.

After the US released this new Afghanistan strategy, Defense Minister Nirmala Sitharaman visited the US. India put forward its Afghan strategy:

However, President Donald Trump now appears reconciled to Pakistan’s centrality to the endgame in the region. He unilaterally announced his plan of pulling US troops out of Afghan. A “framework” deal between the US and Afghan Taliban signed at Doha. Washington’s hasty timetable of 18 months to disentangle itself from the Afghan quagmire has narrowed the US’s options. Due to this India is trapped in a strategic blind-spot in Afghanistan.

There are many peace conferences and processes to solve the crisis. Bonn Agreement 2001 was the first international pact on Afghanistan for peace and reconciliation. Let us look at some of the important among them, their consequences and India’s role or stand in them.

There are two major international peace efforts that are currently underway – the American push for peace led by Zalmay Khalilzad (Special Representative for Afghanistan Reconciliation, Khalilzad) and the Moscow-led consultations.

Zalmay Khalilzad has held talks with different stakeholders – Pakistan, Saudi Arabia, Qatar and the Taliban with the intention to deliver a deal in six months. Appointment of Khalizad indicates the US urge to get out of Afghan at the earliest possible time.

Heart of Asia Conference, Kabul process etc. are some of the other peace conferences.

India’s stand in the Peace Conferences

Trade and Connectivity between India-Afghan

Donald Trump is the third US President who is trying to end the Afghan war. However many experts opine that the announcement of drawdown before getting anything concrete from the Taliban is a strategic blunder for the US. It will lead to instability in Afghan that will not only affect India’s interest but also regional stability.

The current US move has been a diplomatic victory for Pakistan. The US will require Pakistan’s support to implement the interim deal as only Pakistan has influence over the Taliban.

Fully aware of the deadline, the Taliban are trying to secure maximum concessions from Zalmay Khalilzad without offering anything meaningful in return.

With the US withdrawing from Afghanistan, India must find ways to maintain its presence. Despite being an important stakeholder in Afghanistan, India finds itself increasingly marginalized in negotiations involving the key regional players. New Delhi is concerned about the vital role that all the powers are giving to Pakistan. Iran and Russia, two of India’s closest allies during the Northern Alliance’s battle against the Taliban regime in the 1990s, seem out of sync with New Delhi’s interests.

India’s developmental approach has earned it immense goodwill among the Afghan people. However, the “soft power” strategy has limitations. The recent mocking of Donald Trump of New Delhi’s role in war-torn Afghanistan is a manifestation of this limitation. However, there is a domestic consensus in India that boots-on-ground is not an option. Thus India is in the dilemma between continued soft-power or to aggressively push its hard power.

Trump’s recent strategy of engaging with the Taliban without the consideration of India has cast a shadow over the US’s role as a strategic ally of India in the region.

India’s army chief, General Bipin Rawat, recently asserted that India “cannot be out of the bandwagon” because if “you are not sitting on the high table you will not know what is happening”. It is time for New Delhi to engage the Taliban to secure its interests. India also needs to reassess its policy choices in close coordination with Russia and Iran, constantly reminding them that complete surrender to the Taliban’s demands will be detrimental to their own security.

References: The Hindu, Indian Express, The Diplomat, The Wire, Foreign Policy, Wikipedia, Does The Elephant Dance