The International North–South Transport Corridor (INSTC) is the ship, rail, and road route for moving freight between India, Russia, Iran, Europe and Central Asia. It is a not a new concept. But the current INSTC project was initiated by Russia, India and Iran in September 2000 in St. Petersburg. The agreement was signed on 16th May 2002. Members of the project:

As noted earlier, the founding members are Russia, India and Iran. But since the signing of the agreement in 2002, the progress on the route was slow. But on January 18, 2012, a meeting in New Delhi discussed the various modalities to take the project forward. As a follow up, support from other Central Asian nations were sought, and now the group has been expanded.

The current members are India, Iran, Russia, Azerbaijan, Kazakhstan, Armenia, Belarus, Tajikistan, Kyrgyzstan, Oman, Syria, Turkey, Ukraine, and Bulgaria (observer). Turkmenistan currently is not a formal member but is likely to have road connectivity to the corridor, after being formally invited by the PM Modi. Azerbaijan and Armenia are heavily involved in the project with both countries currently building new train lines and roads to complete the missing links in the NSTC. 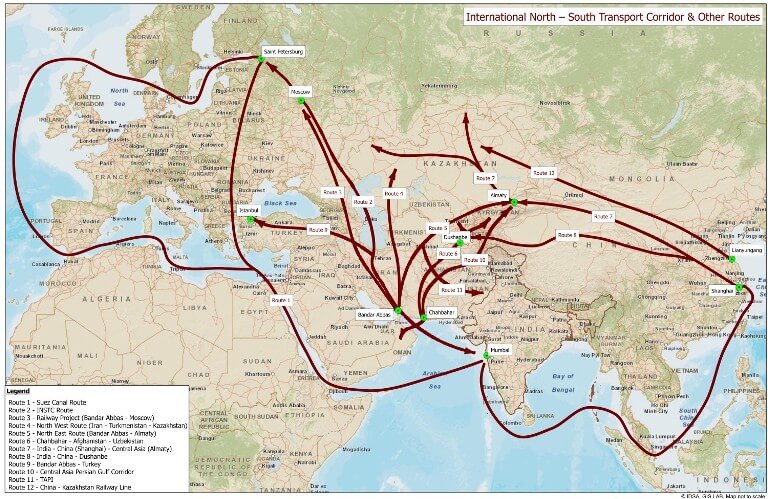 As per the agreement of 2002, the main objective of this route are:

Advantages of the route: 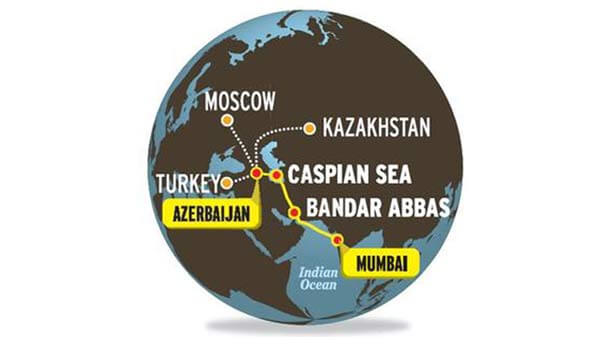 To understand the problem areas and to realise the full potential of the corridor, the dry run was conducted on the Nhava Sheva–Bandar Abbas (Iran)–Baku (Azerbaijan) and the Nhava Sheva–Bandar Abbas–Amirabad (Iran)–Astrakhan (Russia) route via Caspian Sea in August 2014 by the Federation of Freight Forwarders’ Associations in India (FFFAI). The dry run report clearly points out that “the proposed INSTC route via Bandar Abbas in Iran to Russia and CIS Destination in transit through Iran, could be the best route with optimal transit/cost for the Indian exporters/importers”.

INSTC is an ideal start to project India as a big global player. Even though the investment is well worth with its economic, political and geo-strategic benefits, it is testing India’s financial backbone. India can do well to rope in other interested parties for partnering in the project, like Japan who also see Central Asia as a lucrative market for its products.