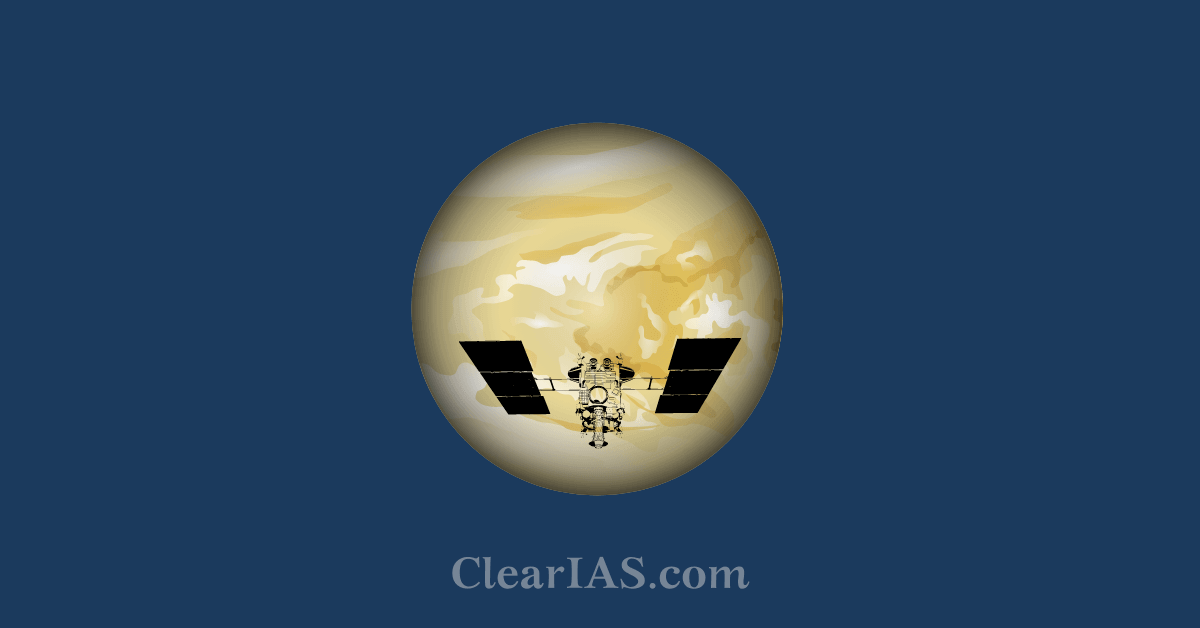 Shukrayaan is the Indian space mission to Venus by ISRO. Read here to know more about the mission.

The Chairman of the Indian Space Research Organization (ISRO) has announced that it is expecting to launch the Venus mission Shukrayaan by December 2024.

The success of Chandrayaan and Mangalyaan has pushed the ISRO to plan more ambitious missions for the future like Gaganyaan and Shukrayaan.

The ISRO is now readying a spacecraft to orbit Venus to study what lies below the surface of the solar system’s hottest planet, and also unravel the mysteries under the Sulfuric Acid clouds enveloping it.

The December 2024 window is being targeted for its launch with orbital maneuvers planned for the following year when earth and Venus would be so aligned that the spacecraft could be put in the neighboring planet’s orbit using a minimum amount of propellant.

The next similar window will be available in 2031 only.

The orbiter, depending on its final configuration, would have a science payload capability of approximately 100 kilograms with 500 W available power.

The initial elliptical orbit around Venus is expected to have 500 km at periapsis and 60,000 km at apoapsis.

The satellite is planned to be launched onboard the GSLV Mk II rocket.

Sweden is getting on board India’s Venus orbiter mission ‘Shukrayaan’ with a scientific instrument to explore the planet.

Institute of Space Physics (IRF)’s satellite instrument Venusian Neutrals Analyzer (VNA) will study how the charged particles from the Sun interact with the atmosphere and exosphere of the planet.

The mission will also bring an instrument to Venus to examine the planet’s atmosphere in infrared, ultraviolet, and submillimeter wavelengths.

It will give insight into the evolution of Earth-like planets and the atmospheric conditions.

It will also aim to provide a futuristic vision of how climate change can have a massive impact on a planet.

The thick atmosphere and surface activity on Venus is a difficult area to maneuver. The complexities are far more than on Mars.

To have a deeper understanding, the instruments need to go deep through the atmosphere.

High-resolution instruments need to be used to penetrate the clouds and darkness in the Venusian atmosphere.

Venus is the second planet from the Sun and is Earth’s closest planetary neighbor.

It is one of the four inner, terrestrial (or rocky) planets, and it’s often called Earth’s twin because it’s similar in size and density. These are not identical twins and there are radical differences between the two planets.

Venus has crushing air pressure at its surface, more than 90 times that of Earth and similar to the pressure encountered a mile below the ocean on Earth.

Another big difference from Earth is that Venus rotates on its axis backward, compared to most of the other planets in the solar system.

Venus was the first planet to be explored by a spacecraft when NASA’s Mariner 2 successfully flew by and scanned the cloud-covered world on Dec. 14, 1962.

Since then, numerous spacecraft from the U.S. and other space agencies have explored Venus, including NASA’s Magellan, which mapped the planet’s surface with radar.

Soviet spacecraft VENERA made the most successful landings on the surface of Venus to date, but they didn’t survive long due to the extreme heat and crushing pressure.

An American probe, one of NASA’s Pioneer Venus Multiprobes, survived for about an hour after impacting the surface in 1978.

More recent Venus missions include ESA’s Venus Express (which orbited from 2006 until 2016) and Japan’s Akatsuki Venus Climate Orbiter (orbiting since 2016).

NASA’s Parker Solar Probe has made multiple flybys of Venus. On Feb. 9, 2022, NASA announced the spacecraft had captured its first visible-light images of the surface of Venus from space during its February 2021 flyby.

NASA’s VERITAS, or Venus Emissivity, Radio Science, InSAR, Topography, and Spectroscopy, will be the first NASA spacecraft to explore Venus since the 1990s. The spacecraft will launch no earlier than December 2027. It will orbit Venus, gathering data to reveal how the paths of Venus and Earth diverged, and how Venus lost its potential to be a habitable world.

NASA’s DAVINCI mission will launch in the late 2020s. After exploring the top of Venus’s atmosphere, DAVINCI will drop a probe to the surface. On its hour-long descent, the probe will take thousands of measurements and snap up-close images of the surface. The probe may not survive the landing, but if it does, it could provide several minutes of bonus science.

ESA has selected EnVision to make detailed observations of Venus. As a key partner in the mission, NASA is providing the Synthetic Aperture Radar, called VenSAR, to make high-resolution measurements of the planet’s surface features.