The issue of the Uniform Civil Code has emerged into India’s political discourse recently mainly because many Muslim women, affected adversely by the personal laws, have begun knocking on the doors of the Supreme Court to uphold their fundamental rights to equality and liberty in keeping with constitutional provisions. The Union law ministry has recently asked the law commission to examine the matters in relation to the implementation of the uniform civil code.

What is Uniform Civil Code?

The Uniform Civil Code (UCC) in India proposes to replace the personal laws based on the scriptures and customs of each major religious community in the country with a common set governing every citizen. 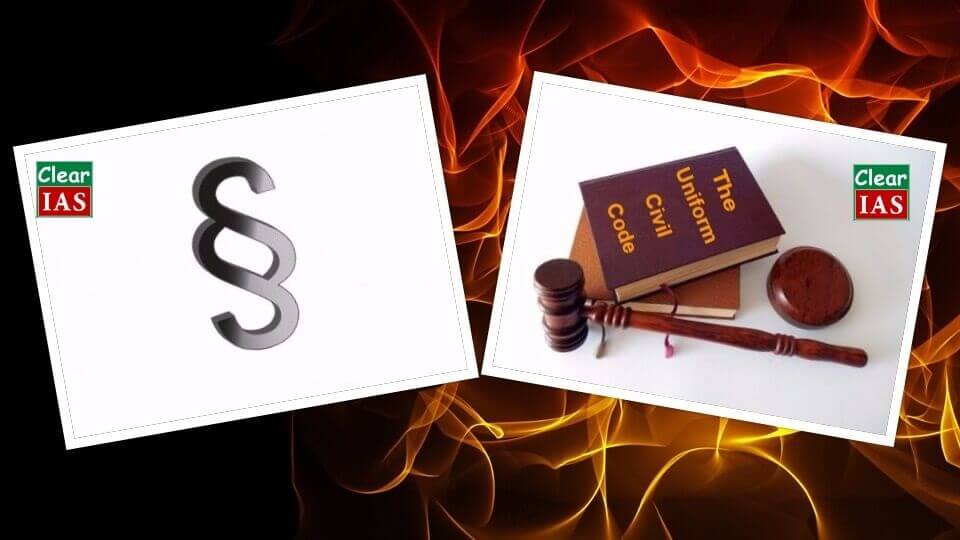 Is there a provision in Indian constitution for Uniform Civil Code (UCC)?

The constitution has a provision for Uniform Civil Code in Article 44 as a Directive Principle of State Policy which states that “The State shall endeavor to secure for the citizens a uniform civil code throughout the territory of India.”

What are the Pros of the Uniform Civil Code?

To provide equal status to all citizens

In the modern era, a secular democratic republic should have a common civil and personal laws for its citizens irrespective of their religion, class, caste, gender etc.

It is commonly observed that personal laws of almost all religions are discriminatory towards women. Men are usually granted upper preferential status in matters of succession and inheritance. Uniform civil code will bring both men and women at par.

To accommodate the aspirations of the young population

A contemporary India is a totally new society with 55% of its population is below 25 years of age. Their social attitudes and aspirations are shaped by universal and global principles of equality, humanity, and modernity.Their view of shedding identity on the basis of any religion has to be given a serious consideration so as to utilize their full potential towards nation building.

To support the national integration

All Indian citizens are already equal before the court of law as the criminal laws and other civil laws (except personal laws) are same for all. With the implementation of Uniform Civil Code, all citizen will share the same set of personal laws. There will be no scope of politicization of issues of the discrimination or concessions or special privileges enjoyed by a particular community on the basis of their particular religious personal laws.

To bypass the contentious issue of reform of existing personal laws 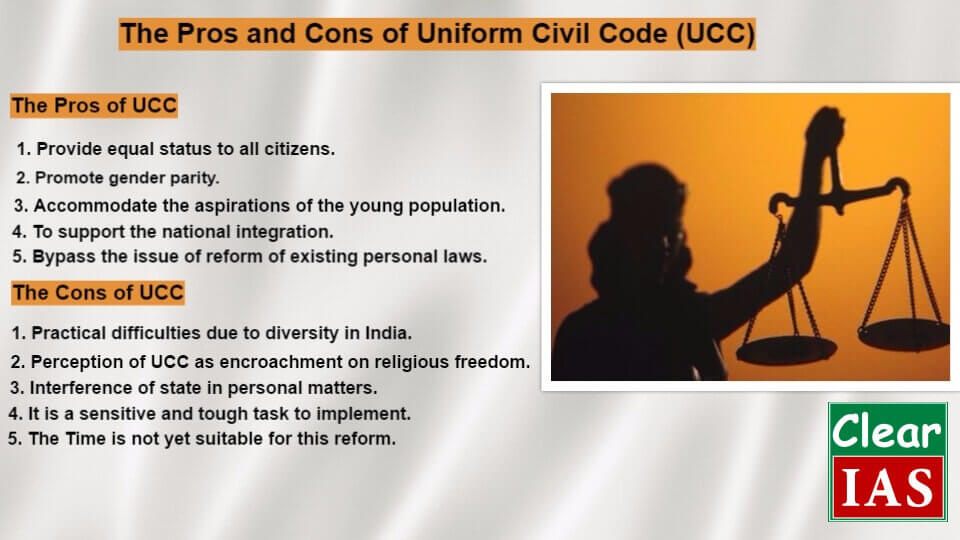 What are the Cons of Uniform Civil Code?

Practical difficulties due to diversity in India

It is practically tough to come up with a common and uniform set of rules for personal issues like marriage due to tremendous cultural diversity India across the religions, sects, castes, states etc.

Perception of UCC as encroachment on religious freedom

Many communities, particularly minority communities perceive Uniform Civil Code as an encroachment on their rights to religious freedom. They fear that a common code will neglect their traditions and impose rules which will be mainly dictated and influenced by the majority religious communities.

Interference of state in personal matters

Such a code, in its true spirit, must be brought about by borrowing freely from different personal laws, making gradual changes in each, issuing judicial pronouncements assuring gender equality, and adopting expansive interpretations on marriage, maintenance, adoption, and succession by acknowledging the benefits that one community secures from the others. This task will be very demanding time and human resource wise. The government should be sensitive and unbiased at each step while dealing with the majority and minority communities. Otherwise, it might turn out to be more disastrous in a form of communal violence.

Time is not yet suitable for this reform

Considering a major opposition from Muslim community in India over this issue overlapping with controversies over beef, saffronization of school and college curriculum, love jihad, and the silence emanating from the top leadership on these controversies, there needs to be given sufficient time for instilling confidence in the community. Otherwise, these efforts towards common will be counterproductive leaving minority class particularly Muslims more insecure and vulnerable to get attracted towards fundamentalist and extremist ideologies.