What make a budget good or bad are not some populist announcements or tax incentives. Unlike the traditional media, what serious aspirants should look at the budget is not if the budget increase the cost of mobile phone, liquor or gold. What makes a budget good or bad are some figures – the numbers which show how much the government is spending on where. Preparation of good budget demands balancing of certain parameters. A budget with zero fiscal deficit may not be always a good budget, a budget is good if it focuses on the right areas, if it sets the priorities right and if it shows the vision of the government.

Union Budget 2015-16 is special as this is the first budget after the creation of National Institution of Transforming India (NITI) and acceptance of 14th Finance Commission’s (FFC) recommendation of substantially higher devolution of Union taxes to States. This Budget marks the beginning of the award period (2015-2020) of the FFC during which States will be devolved 42% of the divisible pool of Union taxes from existing 32%. 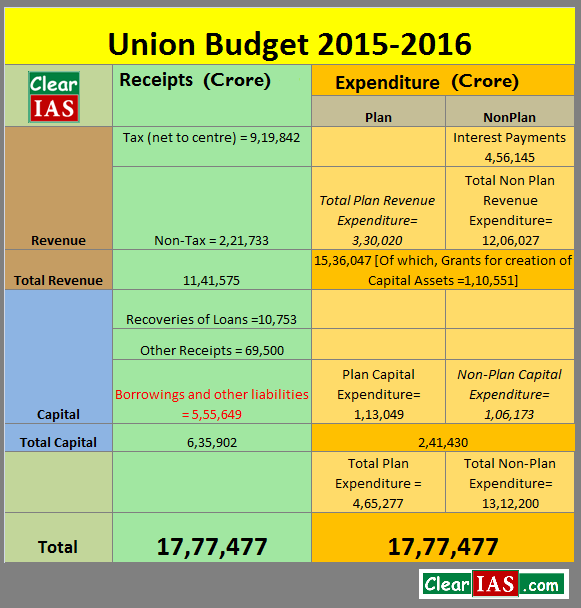 Like most of the previous budgets, Indian Budget for 2015-16 too runs on deficit financing. Revenue Receipts as per the budget is Rs.11,41,575 crore while revenue expenditure is Rs.15,36,047 crore leading to a Revenue Deficit of Rs.3,94,472 crore. Capital receipts figure as per the budget is Rs.6,35,902 crore (including borrowings and other liabilities) while capital expenditure is Rs.2,41,430 crore. Though the actual numbers are on a rise for most of the deficits since 2014-15 (except for Primary Deficit), as a percentage of GDP Indian Finance minister has managed to bring deficits down in compliance with the FRBM (Fiscal Responsibility and Budget Management) Act.

PS: The 42% devolution of taxes to states should be extra to this figure.

Despite the devolution of tax share to states, Indian Finance minister has done a decent job to stick to the standards of FRBM act. The budget shows ambitious targets with respect to revenue collection and various deficits, but often we have seen the Revised Estimates (RE) deviating a lot from the Budgetary Estimates (BE). For a nation to progress, the government should invest in productive assets (capital expenditure). Education and health are the two major areas where this government, like most previous governments, failed to give proper attention.