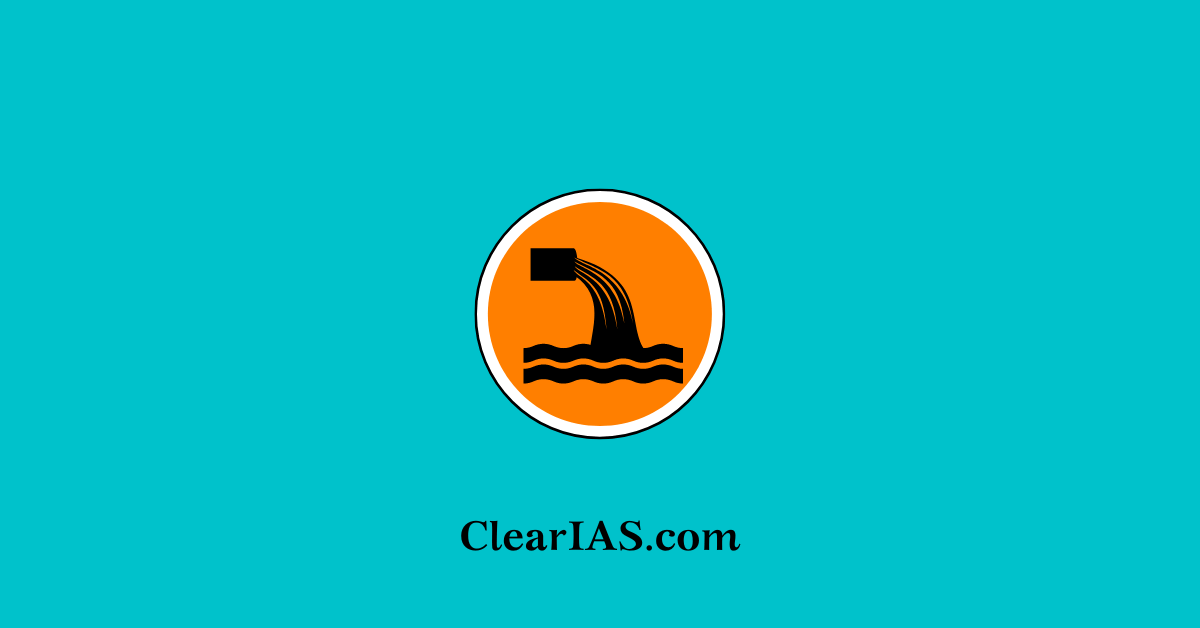 Since water is a state subject and it is the duty of the States/Union Territories (UTs) to take the necessary steps to control water pollution.

A depth understanding of water pollution its effect and its measures are mentioned below.

These studies show that in many States and UTs, levels of pollutants such as fluoride, arsenic, nitrate, iron, and heavy metals beyond the permissible limits are present.

The majority of the groundwater contamination is geogenic in origin and has not changed significantly over time.

Nitrate contamination, on the other hand, is mostly the result of human activity, and some places, particularly those close to inhabited areas, have seen an increase in its presence. Furthermore, overuse of fertilisers can also result in nitrate contamination.

According to the Central Pollution Control Board’s (CPCB) most recent study, 351 polluted stretches were identified on 323 rivers based on monitoring results in terms of Bio-chemical Oxygen Demand (BOD), which is an indicator of organic pollution.

The massive amount of sewage that is released into rivers untreated or partially treated contaminates waterways by raising their biological oxygen demand.

Biological Oxygen Demand is the quantity of dissolved oxygen required by microorganisms for aerobic decomposition  (in the presence of oxygen) of organic materials (waste or pollution).

The BOD increases with the amount of organic matter present (e.g., in sewage and polluted bodies of water). Therefore, the BOD is a trustworthy indicator of the organic pollution of a water body.

One of the main reasons for treating wastewater prior to its discharge is to reduce its need for oxygen and thereby lessen its demand.

According to the Central Pollution Control Board and the Ministry of Environment, Forest, and Climate Change, encroachments caused by population growth, urbanisation, and encroachment have led to a decline in water bodies over time.

The main causes of river pollution in the country are discharges of partially and untreated sewage from cities and towns and industrial effluents into their respective catchments, issues with the operation and maintenance of sewage/effluent treatment plants, a lack of dilution, and other non-point sources of pollution.

According to the provisions of the Water (Prevention & Control of Pollution) Act of 1974 and the Environment (Protection) Act of 1986, industrial units must install effluent treatment plants (ETPs) and treat their effluents to meet specified environmental standards before discharging into rivers and other bodies of water.

State Governments have the primary responsibility to monitor, as well as take corrective actions, regarding pollution of water sources by industries or mines.

Deaths Due to Lack of Clean Water

According to the 2018 Composite Water Management Index (CWMI) study from NITI Aayog, around two lakh people per year die as a result of insufficient access to clean water.

According to the same NITI Aayog report, over 600 million people or 40% of India’s projected population may experience water stress by 2030.

Measures Taken by the Government to prevent water pollution

Various programmes have been launched by the Government of India for the conservation and protection of rivers and water bodies in the country.

The concerned States and Union Territories (UTs) are trying to implement Action Plans for the restoration of water quality in the identified polluted stretches of rivers in accordance with the directives of the National Green Tribunal.

Since August 2019, the Indian government has been working with the states to carry out the Jal Jeevan Mission (JJM), which aims to provide drinkable tap water to every rural home in India by 2024, including those in habitations where the water quality is poor.

Children are especially sensitive to water-borne diseases and contamination in drinking water. A particular effort was started in 2020 to make the provision of potable tap water supply in schools, Anganwadi centres, ashram shalas, etc. on a priority basis.

The National Lake Conservation Plan (NLCP) is being implemented by the Ministry of Environment and Forests to manage and conserve contaminated and degraded lakes in urban and semi-urban areas.

Its objective was to conserve aquatic ecosystems (lakes and wetlands) by putting long-term conservation plans into action that were guided by uniform policies and standards.

Atal Mission for Rejuvenation and Urban Transformation (AMRUT) was established with the intention to make sure that every home has access to a water tap with a reliable water supply and a sewer connection.

The government has taken several initiatives to control water pollution but further changes are also important. A few of them are-

The minimum flow of the river is necessary to preserve and it is important to restore the aquatic health and ecosystem. A minimum river flow is necessary for the discharge of treated sewage.

Citizen involvement and engagement are essential for overhauling the waste management industry and bringing about the necessary behavioural change.

A comprehensive waste management policy is required, one that emphasises the importance of decentralised garbage disposal procedures since this will encourage private actors to participate.

It’s critical that bioremediation, or the use of microbes to purify contaminated soil and water, become mandated in all regions where it is possible.