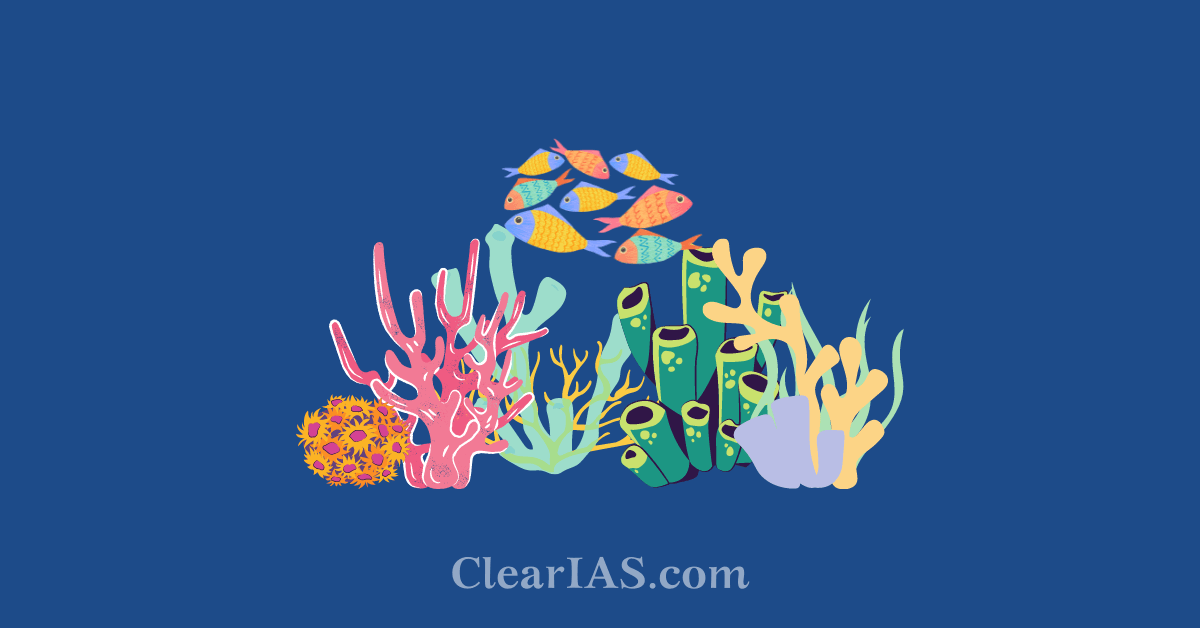 Coral reefs are underwater ecosystems crucial for ecological balance. They are called the rainforests of the ocean, but for a few years they are under great threat. Read here to know about coral bleaching and other important facts.

Great Barrier Reef: Australia confirms a new mass bleaching event, which is the fourth time in six years that such widespread damage due to warm sea temperatures has been detected.

Corals are invertebrate animals belonging to a large group of colourful and fascinating animals called Cnidaria.

Each coral animal is called a polyp, and most live in groups of hundreds to thousands of genetically identical polyps that form a ‘colony’. The colony is formed by a process called budding, which is where the original polyp grows copies of itself.

These polyps have microscopic algae called zooxanthellae living within their tissues. The corals and algae have a mutualistic relationship. The coral provides the zooxanthellae with the compounds necessary for photosynthesis.

In return, the zooxanthellae supply the coral with organic products of photosynthesis, like carbohydrates, which are utilized by the coral polyps for the synthesis of their calcium carbonate skeletons.

In addition to providing corals with essential nutrients, zooxanthellae are responsible for the unique and beautiful colours of corals.

Coral is generally classified as either hard coral or soft coral. There are around 800 known species of hard coral, also known as the ‘reef building’ corals.

Soft corals, which include seas fans, sea feathers, and sea whips, don’t have the rock-like calcareous skeleton like the others, instead, they grow wood-like cores for support and fleshy rinds for protection

What are coral reefs?

Corals are found across the world’s ocean, in both shallow and deep water, but reef-building corals are only found in shallow tropical and subtropical waters. This is because the algae found in their tissues need light for photosynthesis and they prefer water temperatures between 22-29°C.

There are also deep-sea corals that thrive in cold, dark water at depths of up to 20,000 feet (6,000 m). Both stony corals and soft corals can be found in the deep sea. Deep-sea corals do not have the same algae and do not need sunlight or warm water to survive, but they also grow very slowly. One place to find them is on underwater peaks called seamounts. The three main types of coral reefs are fringing, barrier, and atoll.

The most common type of reef is the fringing reef. This type of reef grows seaward directly from the shore. They form borders along the shoreline and surrounding islands.

When a fringing reef continues to grow upward from a volcanic island that has sunk entirely below sea level, an atoll is formed. Atolls are usually circular or oval, with an open lagoon in the centre.

Barrier reefs are similar to fringing reefs in that they also border a shoreline; however, instead of growing directly out from the shore, they are separated from land by an expanse of water. This creates a lagoon of open, often deep water between the reef and the shore.

Indonesia has the largest coral reef area in the world. India, Maldives, Sri Lanka, and Chagos have the maximum coral reefs in South Asia. The Great Barrier Reef of the Queensland coast of Australia is the largest aggregation of coral reefs extending to a length of 1,931 kilometres and a width that varies from 16-322 kilometres. 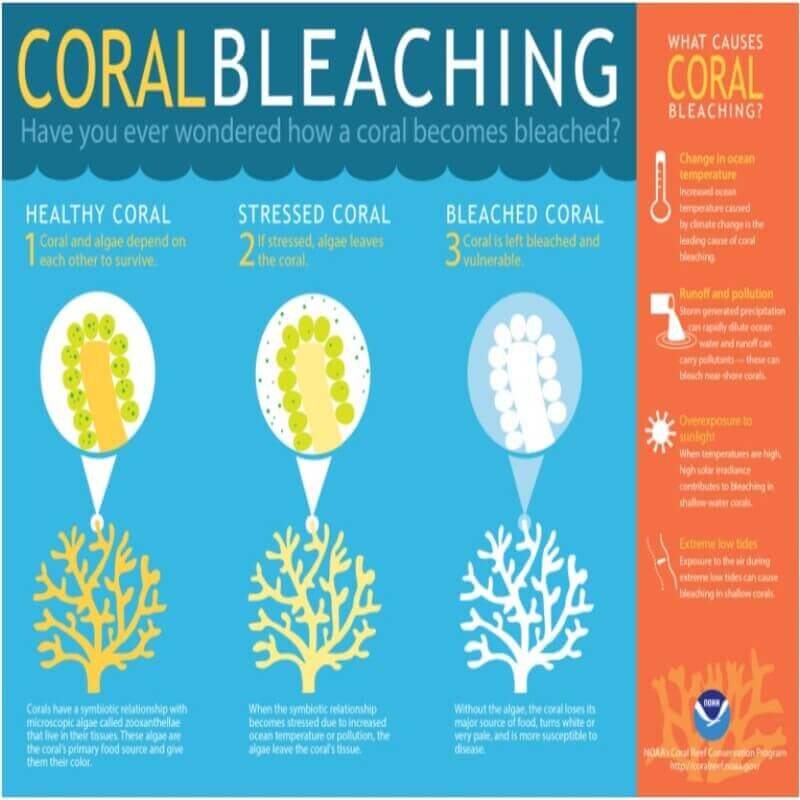 When corals are stressed by changes in conditions such as temperature, light, or nutrients, they expel the symbiotic algae living in their tissues, causing them to turn completely white.

Warmer water temperatures can result in coral bleaching. When water is too warm, corals will expel the algae (zooxanthellae) living in their tissues causing the coral to turn completely white. This is called coral bleaching. When a coral bleaches, it is not dead. Corals can survive a bleaching event, but they get under more stress and are subject to mortality.

Warm Sea Temperature: Coral species prefer to live in waters close to the warm temperatures which they can tolerate but a slight increase in ocean temperature can harm corals. Events like El Nino and marine heatwaves increase the sea temperature and destroy coral reefs.

Ocean Acidification: Oceans are the carbon sinks, but more carbon dioxide increases the acidity of the ocean. This increase in the acidity of ocean water inhibits the coral’s ability to create calcareous skeletons, which is essential for their survival.

Ocean Pollution: The increasing nutrient concentrations leads to excessive phytoplankton growth, and attracts more and more marine life, which may cause strain on the reefs.

Predators: Acanthaster planci, also known as Crown-of-Thorns Starfish, eats corals during the night. They may destroy the entire coral reefs if found in huge numbers.

Why is coral health important?

Marine diversity: Coral reefs have many species of marine organisms that depend on them for food, shelter, and reproduction. Healthy corals support thriving marine life, but unhealthy corals can lead to loss of the marine line which in turn will disrupt the food chain.

Fishing: Fishing communities are depended on corals for seasonal migrations of fish species. Unhealthy corals will lead to a decrease in fishing activities impacting economic activities.

Various global and regional initiatives exist around the world, focused on different aspects of research, information-sharing, conservation, and management related to coral reefs. These initiatives support countries in their efforts to achieve the Aichi Biodiversity Targets and the Sustainable Development Goals.

As many as 10 per cent of coral reefs have degraded; another 30 per cent are likely to disappear within the next 20 years across the globe. According to biologists, if proper conservation and management measures are not taken, all coral reefs of the Indo-Malayan region may disappear in the next 40 years.

An integrated coastal management plan is the need of the hour for the effective management of coral reefs. An act to protect them from man-made activities is needed.

Pollution caused by domestic sewage, industrial wastes, chemicals, and fertilizers should be restricted. Anchoring of boats in the areas where coral reef areas are present should be banned.

Mangrove forests play a crucial role in helping the coral reef system by acting as filters and providing protection from cyclones, storms, and tsunamis. Destruction of mangrove forests in the reef areas should be prohibited. Planting of mangrove species in reef areas can be undertaken with the involvement and support of the local community.