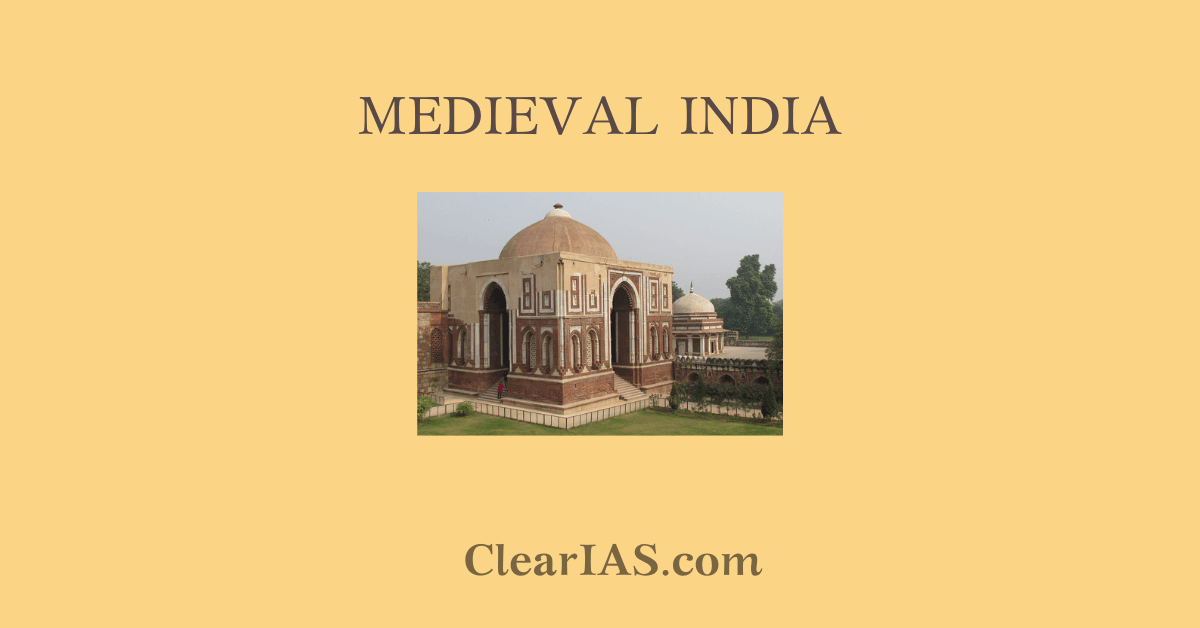 The khalji dynasty began after the end of the mamluk or slave dynasty. Read here to know more about the second dynasty of the Delhi Sultanate.

The Khilji or Khalji dynasty ruled from 1290 to 1320 CE after overthrowing the Slave dynasty, thus becoming the second dynasty of the Delhi Sultanate.

They were Turko-Afghans who came from Afghanistan with Muhammad Ghori. Khaljis were the vassals of the Mamluk dynasty of Delhi.

The Khalji rule marked the transfer of power from the monopoly of Turkic nobles to Afghans.

Its rule is known for conquests into present-day South India and successfully fending off the repeated Mongol invasions of India.

The last major mamluk ruler, Balban, destroyed the power of the Chahalgani in his struggle to maintain power over his insubordinate Turkish officers.

Jalaluddin Khalji was around 70 years old at the time of his ascension.

Jalaluddin succeeded in overcoming the opposition of the Turkish nobles and ascended the throne of Delhi in 1290.

During his 60 years of reign he faced many revolts and attacks:

The Mongols were defeated by Jalaluddin Khalji near Balban’s frontier line of Tabarhind, Sunam. The demoralized Mongols agreed to a truce and about 4000 Mongols were converted to Islam and settled near Delhi.

Alauddin Khalji was the nephew and son-in-law of Jalal-ud-din. He raided the Deccan peninsula and Deogiri then the capital of the state of Maharashtra, looting their treasure.

He returned to Delhi in 1296 and murdered Jalaluddin Khalji and assumed the power of the Sultan becoming the second ruler of the Khalji dynasty.

Alauddin was the most powerful sultan of the dynasty and was known for his administrative and military reforms.

After his Chittor campaign, Alauddin fixed the cost of all commodities from foodgrains to a needle; from costly imported clothes to horses, and cattle and slaves as well.

He introduced a system of four different markets: grains, clothes and other groceries, horses, slaves, and cattle, and one for miscellaneous commodities.

The state itself set up warehouses and stocked them with foodgrains to be released only in times of famines and disasters.

1299- Gujrat was attacked by Malik Kafur who was a Eunuch, and most loyal campaigner for Khalji. He was also called ‘Hazar Dinari’.

1303- Khalji attacked Mewar (Chittor)which was ruled by Rana Ratan Singh. Queen Rani Padmini and all women of the palace committed Jauhar to escape capturing from Alauddin Khalji. Malik Mohd Jayasi wrote Padmavat in the 16th century about this incident.

He faced multiple Mongol invasions from the North but repelled them successfully.

From 1309 onwards, his slave general Malik Kafur attacked territories south of Vindhya like Devagiri and Kakatiyas of Warangal.

Alauddin titled himself ‘Sikander-i-Sani’ meaning Alexander the second as he had big ambitions to conquer the whole of India and Persia.

He built a new capital, the Siri fort, due to repeated Mongol attacks.

Alauddin Khalji died in 1316 and Malik Kafur raised the young son of Khalji as the sultan and imprisoned the other sons. But Kafur lacked support from the armies and nobles, and hence was killed within a few months.

Mubarak Shah, one of the elder sons of Alauddin, was made the Sultan after the death of Malik Kafur in 1316. He was the last ruler of the Khalji dynasty.

He immediately pulled all the reforms by his father, which ended up creating inflation in the market.

He subdued some campaigns during his short reign, such as in Gujarat, Warangal, etc.

Mubarak Shah was very fond of his slave Khusrau Khan who was captured by Alauddin’s army during their Malwa raid and converted from Hinduism. Khusrau was used as a catamite by Mubarak Shah which he detested.

In 1320, Khusrau Khan killed Mubarak Shah as revenge for exploiting him.

This was the end of the Khalji Dynasty in 1320, and the next dynasty of Tughluqs took over the Delhi sultanate.