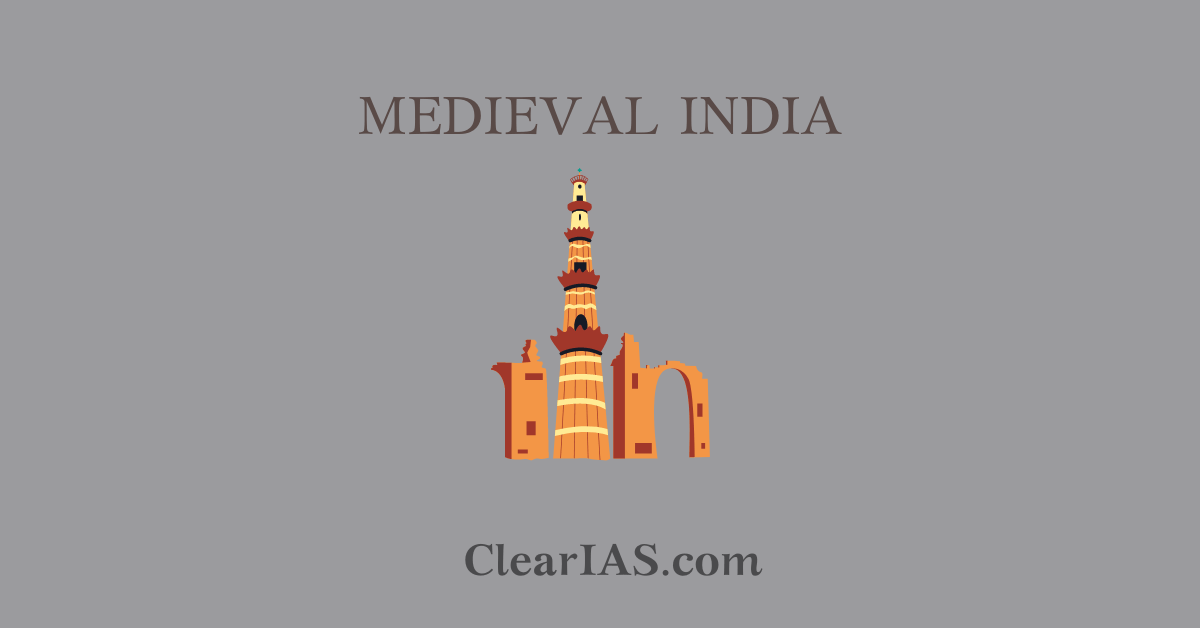 The first Islamic rulers of India were from the slave dynasty or the mamluks of the Delhi sultanate in India. Read here to know about the mamluks.

Muhammad Ghori died in 1206 CE after which the Ghurid rule declined but his slave generals established different kingdoms out of his empire:

Qutbuddin Aibak, a Turkish slave of Muizzuddin Muhammad of Ghor was instrumental in consolidating northern India and was the de facto ruler of Delhi.

The slave generals started a civil war amongst themselves in hopes of gaining the whole empire. Yildiz marched to Punjab from Ghazni, intending to take control of the region of India but Aibak marched against him and forced him to retreat to Kohistan.

Eventually, Ghiyasuddin Mahmud (brother of Muhammad Ghori) recognized Aibak as the Sultan of Hindustan in 1209 CE thus starting the Slave or Mamluk dynasty’s rule in India.

This marked the beginning of the Delhi Sultanate which ruled for the next 320 years through different dynasties- the Mamluks, Khiljis, Tughluqs, and Lodhis.

The slave dynasty rulers were also called Turkic mamluks or the Mamluk dynasty.

Muhammad Ghori made Aibak in charge of his Indian territories after the Ghurid victory in the Second Battle of Tarain in 1192. Aibak expanded the Ghurid power in northern India by conquering and raiding several places in the Chahamana, Gahadavala, Chaulukya, Chandela, and other kingdoms.

By 1206-09, Aibak assumed the title of Sultan thus beginning the rule of the Slave dynasty and making Lahore his capital to secure the northwestern frontier of the kingdom.

After being recognized as the ruler of India, Aibak focused on consolidating his rule in the territories already under his control, rather than conquering new territories.

He is also called “Lakh Baksh” for his donation of 1 lakh copper coins or jitals as charity.

He also built the Quwwat-ul-Islam mosque (meaning Triumph of Islam) in Delhi.

Aibak also commissioned the construction of Adhai din ka Jhopra in Ajmer between 1192 and 1199.

He died in 1210 while playing chaughan or horse polo. The tomb of Qutubuddin Aibak is situated in Lahore.

He was succeeded by Aram Shah, but his relationship with Aibak is uncertain.

Since Aibak died unexpectedly without naming a successor, the Turkic nobles (maliks and amirs) appointed Aram Shah as his successor to avoid instability in the kingdom.

However, the Turkish nobles in different parts of the Sultanate opposed his ascension, and Khalji nobles of Bengal rebelled against him. A group of nobles invited Iltutmish to occupy the throne.

Iltutmish, a former slave of Aibak and the governor of Badaun, had a distinguished record of service and he was also the son-in-law of Qutbuddin Aibak.

He seized the throne by defeating Aibak’s successor Aram Shah in 1211. This in a way checked the accession by hereditary rulers right at the beginning of the Slave Dynasty.

Itutmish is considered the true founder of the Slave dynasty as he subdued many Rajput kings and put down rebellions in Bengal, and Punjab and expanded the territory.

He belonged to the Ilbari tribe hence the dynasty is called the ‘Ilbari dynasty’.

He made Delhi his capital thus making him the first Muslim sovereign to rule from Delhi. He ruled with aid of Turkani Chihalgani/Chalisa, a council of 40 elite nobles.

He did not immediately claim a sovereign status and acknowledged the nominal authority of Taj al-Din Yildiz, another former slave who had gained control of the Ghurid capital Ghazni.

A Khwarazmian invasion made Yildiz move from Ghazni to India to demand control of the former Ghurid territories in India.

In 1221, the Khwarazmian ruler Jalal ad-Din Mingburnu moved to the Indus Valley region due to a Mongol invasion. But he returned in 1224 without entering Indian territories.

In the eastern territories, Aibak’s former subordinates had carved out an independent kingdom headquartered at Lakhnauti.

Iltutmish started the system of Iqtedari/Iqtedar which is the division of the empire into Iqtas, and these were assigned to the nobles as salary.

His authority as a sultan was approved by the Abbasid Caliph.

During Iltutmish’s reign, the city of Delhi emerged as the center of Islamic power and culture in India. He patronized several scholars, including historian Minhaj-i-Siraj and the Sufi mystic Qutbuddin Bakhtiar Kaki.

Iltutmish died in 1236 due to illness and was buried in the Qutb complex in Mehrauli.

His death was followed by years of political instability in Delhi, with the sultanate seeing four rulers in a short period.

Sultan lltutmish’s daughter Razia administered Delhi during 1231-1232 when he was busy with the Gwalior campaign. Iltutmish was impressed by her performance during this period, in controlling the court nobles.

Hence, Iltutmish is believed to have nominated daughter Raziya to the

Throne by induced nobles and theologians (ulama)to assent to this nomination.

Initially, the Turkic nobles supported her because they expected her to be a puppet who they could control.

But after Iltutmish’s death, his son (Razia’s step-brother) Ruknuddin Firoz Shah ascended to the throne as his mother Shah Turkan held favors among some court nobles.

To strengthen her position on the throne she had to fight off her step-brothers and powerful Turkic nobles.

Raziya then appointed an Abyssinian (Ethiopian) slave, Yakuth into important administrative positions. He was also her royal servant and military general.

She discarded female clothes, rode on elephants, and held court with her face unveiled.

The Turkish nobles accused her of violating female modesty and being too friendly to slave Yakuth Khan and rose in revolt.

During this time, Altunia, Governor of Bhatinda, revolted against her and captured her as a prisoner. Razia agreed to marry him, in hopes of getting his support and crushing the Chahalgani revolt.

In 1240, Razia proceeded to Delhi with Altunia to regain her control but got defeated and murdered on orders of Chalisa/Chahalgani. They had now allied themselves with Muizuddin Bahram (Razia’s half-brother) who ascended to the throne.

The grave of Razia is located at Mohalla Bulbuli Khana near Turkman Gate in Old Delhi. The 14th-century traveler Ibn Batuta mentions that Razia’s tomb had become a pilgrimage center. Today, the site is largely neglected and the Archaeological Survey of India performs annual maintenance on it, but has been unable to beautify it further because it is surrounded by illegal construction.

After Razia’s death, the years between 1240 and 1266 saw rules of many weak rulers who were controlled by the chahalgani and killed if they tried to act on their own.

Nasiruddin Mahmud strictly followed monogamy. He spent most of his time writing down verses of the Quran. He sold the handwritten copies and used the money for his expenses. Surprisingly enough, he had no servants to carry out his tasks.

Balban belonged to the famous group of 40 Turkic slaves (chahalgani) of Iltutmish and helped his son-in-law and youngest son of Iltutmish ascend the throne in 1246.

Balban led many successful military campaigns, especially against the Mongol threat. The Mongols kept attacking the north-western frontiers continuously since 1241 and besieged Lahore and Multan.

Balban was instrumental in checking the Mongol invasions through the frontiers of the Delhi Sultanate gradually receded from the river Jhelum to Beas.  Balban recovered Multan but remained under heavy Mongol pressure.

In 1266, Nasiruddin Mahmud died and Balban ascended the throne himself.

According to Balban the Sultan was God’s shadow on Earth and the recipient of divine grace.

He had to face many challenges like many bandits and robbers were active in the Ganga-Yamuna doab area, a few Rajput zamindars had set up forts in the area defying the government, and Mewatis raided Delhi frequently.

Balban strongly dealt with the challenges and destroyed the Rajput strongholds and killed the Mewatis. He stationed Afghan soldiers in the doab area to safeguard the area.

The Mongol threat was dealt with both force and diplomacy thus being able to subdue the attacks though a large portion of Punjab was lost.

He maintained rigorous court discipline and started new customs to show that nobles were not equal, Sultan was above such as:

Amir Khusro was a contemporary of Balban.

End of the Slave dynasty

Ghiyas ud din Balban ruled as the Sultan until he died in 1287. Balban’s heir was his older son, Prince Muhammad Khan, but he perished in a battle against the Mongols in 1285. His other son, Bughra Khan, was reluctant to assume the throne and sought to remain the ruler of Bengal instead.

Balban chose his grandson, Kaikhasrau, son of Prince Muhammad, as heir apparent. However, after his death, his nobles nominated Qaiqubad, another grandson of Balban as Sultan.

Qaiqubad was very weak and incompetent and eventually fell to stroke and had to pass the rule to his three years old sons, Shamsuddin Kayumars, who was eventually dethroned by his guardian, Jalal ud din Firuz Khalji in 1290, bringing an end to the Slave dynasty.