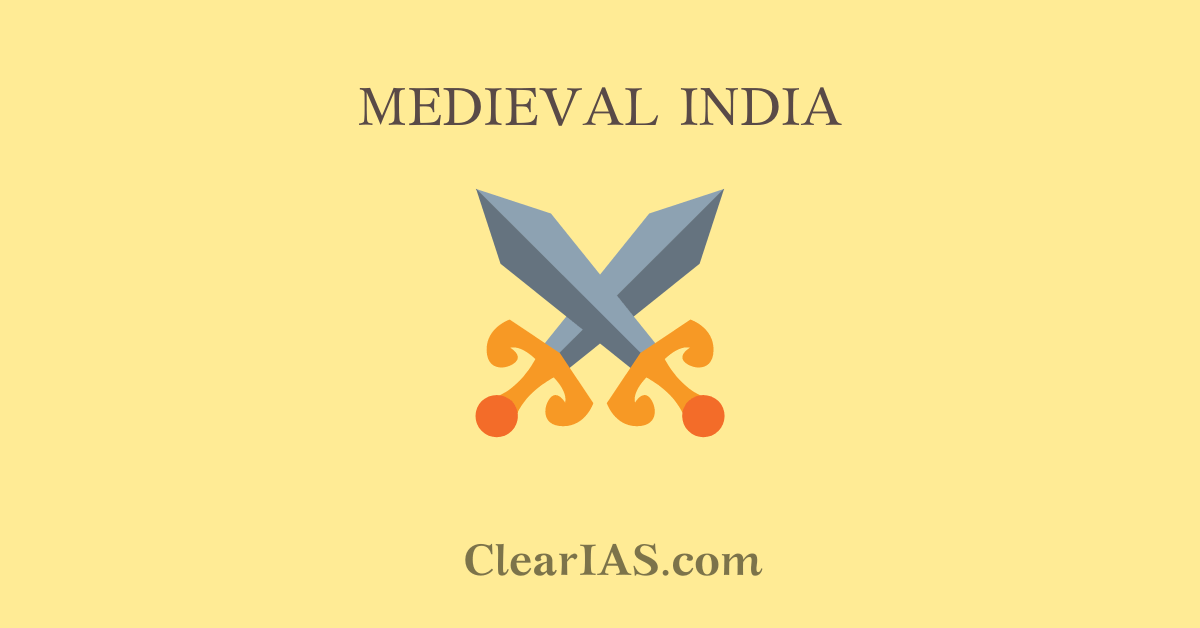 The Sayyid dynasty was the fourth and Lodi dynasty the fifth and last of the Delhi Sultanate. Read here to know more about both dynasties.

In 1398, the Turko-Mongol invader, Timur the lame (Tamerlane) invaded and defeated the armies of the Sultanate.

The then Tughlaq Sultan fled from his capital to Gujarat. This allowed provincial governors and local autonomous rulers to declare their independence.

Many newly independent states sprang up during this period of chaos:

The last two dynasties- Sayyid and Lodi- were not strong enough to hold together the sultanate and more kingdoms began declaring independence over the century of their rule.

Before his departure from India, Timur appointed Khizr Khan as governor of Multan. He captured Delhi and founded the Sayyid dynasty in 1414

Khizr Khan did not take up the title of Sultan and continued to be a Rayat-i-Ala (vassal) of the Timurids.

The sayyid dynasty ruled from 1414 to 1451 until the Lodi dynasty took over. The sayyid rule was weak and confined areas in and around Delhi. The 37 years of sayyids saw only 4 rulers.

He was the governor of Multan under Firuz Shah Tughlaq.

When Timur invaded India, Khizr Khan, joined him and later Timur appointed him the governor of Multan and Lahore.

He then conquered the city of Delhi and started the rule of the Sayyids in 1414. He was ruled in the name of Timur.

He brought parts of Surat, Dilapur, and Punjab under his control but lost Bengal, Deccan, Gujarat, Jaunpur, Khandesh, and Malwa.

He died in 1421 and was succeeded by his son Mubarak Shah.

Mubarak Shah crushed the local chiefs of the Doab region and the Khokhars. But he did not attempt to recover the lost territories of the sultanate.

He is the first Sultan ruler to appoint Hindu nobles to the court of Delhi.

He constructed the “Mubarakbad” City on the banks of the river Jamuna.

He was murdered in 1434 and his nephew succeeded him.

He was the nephew of Mubarak Shah who came to the throne with help of Sawar ul Mulk.

He defeated the ruler of Malwa with the help of Bahlul Lodi the Governor of Lahore.

He conferred Bahlul Lodi with the title Khan-i-Khanan for help in defeating the ruler of Malwa.

He was succeeded by Alam Shah in 1443 after his death.

He was not a very strong ruler. He abdicated the throne when Bahlul Lodi sacked Delhi in 1451.

Alam Shah spent the rest of his days living on the outskirts of the capital and died in 1478, thus fully ending the Sayyid dynasty.

The Lodi dynasty was of Afghan origin and the fifth and final dynasty of the Delhi sultanate.

Bahlul Lodi was one of the afghan sardars who had established themselves in Punjab. He was granted the iqta of Sirhind during the Sayyid rule.

Bahlul Lodi checked the growing power of the Khokhars, a fierce war-like tribe living in the Salt Ranges of modern-day Pakistan.

Sayid Sultan of Delhi, Muhammad Shah called him to help against an attack by Malwa. Even after fending off the attack, Bahlul stayed in Delhi.

Bahlul and his army took control of Delhi in 1451.

Lodhi Dynasty is famous for its Garden architecture style of Tombs, for example, the ‘Lodhi’ Gardens in Delhi

Bahlul spent most of his time fighting against the Sharqi dynasty of Jaunpur and ultimately annexed it. He placed his eldest surviving son Barbak on the throne of Jaunpur in 1486.

He extended his holdings over Gwalior, Jaunpur, and upper Uttar Pradesh.

He divided his kingdom among his sons and relatives and named his younger son Sikander Lodi as his successor.

This led to a power struggle after his death in 1489.

Sikander Lodi succeeded to the throne after a series of power struggles but he became the most powerful Lodi ruler.

He defeated the Rajput kingdoms of Gwalior, Chanderi, and Dholpur. He also annexed Bihar.

In 1506, he shifted the capital from Delhi to the city he founded, Agra.

He was a contemporary of Mahmud Begarha of Gujarat and Rana Sanga of Mewar.

Sikander made the Afghan nobles bow to the superiority of the Sultan as opposed to the Afghan Sardar’s custom of tribal independence.

Sikander established efficient administration with an emphasis on justice.

He was interested in agriculture and abolished the octroi duty on grains.

He ordered repairs of the Qutub Minar in 1503 making him the fourth sultan (after Qutubuddin Aibak, Iltutmish, and Firuz shah Tughluq) to be involved in its architecture.

He patronized trade and commerce. He was a poet of repute, composing under the pen-name of Gulruk. He was also a patron of learning and ordered Sanskrit work in medicine to be translated into Persian.

Sikander’s mother was Hindu hence the nobles raised questions over his commitment to Islam. To prove this, Sikandar became a bigot and orthodox ruler.

Ibrahim Lodi succeeded to the throne after the death of his father Sikander Lodi and was the last ruler of the Lodi dynasty.

He inherited a weak and politically unstable sultanate with a depleted treasury due to a lack of trade.

He was a good warrior but was highly arrogant in nature and insulted his nobles openly.

Nobles who revolted were put to death.

Daulat Khan Lodi, governor of Punjab invited Babur to invade India, who marched into Delhi and killed Ibrahim Lodi at the First Battle of Panipat.

The Lodi dynasty and the troops of Babur engaged in the first Battle of Panipat on April 20, 1526.

The Mughals introduced gunpowder-powered weapons and field artillery to the Indian subcontinent in this fight, making it one of the first ones.

The Mughal Empire was established at this time in North India, and the Delhi Sultanate was put to an end.

The weak rulers of the Sayyid and Lodi dynasties disintegrated the sultanate paving way for the Mughals to take over for their long rule ahead.