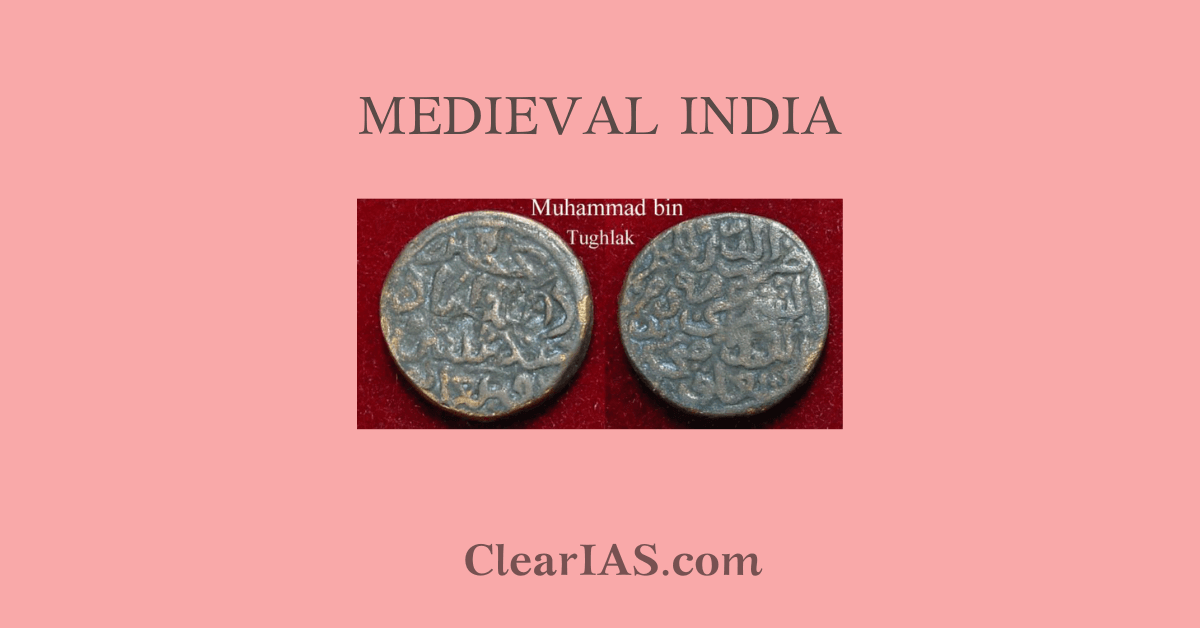 The Tughlaq dynasty took over from the Khaljis in 1320, becoming the third dynasty of the Delhi Sultanate. Read here to know more about the tughlaqs.

The Turkish nobles of Delhi were insulted by Khusrau khan as he favored Hindu nobles from Gujarat (Khausrau was a Hindu before being captured as a slave and converted to Islam by Alauddin Khalji).

The nobles invited Ghazi Malik (then the governor of Punjab under the Khaljis), to lead a coup in Delhi and remove Khusro Khan.

In 1320, Ghazi Malik launched an attack with the help of an army of Khokhar tribesmen.

The tughlaqs were the longest ruling dynasty of the Sultanate period as they ruled from 1320 to 1414.

After ascending to the Delhi throne, Ghiyasuddin Tughlaq adopted a sustained and vigorous forward policy. Thus started the expansion of the Delhi sultanate’s borders.

In 1321, he sent his eldest son Ulugh Khan (later known as Muhammad bin Tughlaq), to Deogir to plunder the Hindu kingdoms of Warangal. But this first attempt was a failure.

This was followed by the conquest and annexation of Mabar (Tamil Nadu coast). After this, Ulugh Khan raided Odisha and returned to Delhi with rich plunder.

By 1324, the borders of the Delhi sultanate had reached up to Madurai.

In 1328, the last Hindu principality of the area, Kampili (south Karnataka) was also annexed.

Meanwhile, Bengal had been virtually independent since the death of Balban of the Mamluk dynasty.

In 1324-1325 CE, after placing Delhi under the control of his son Ulugh Khan, Ghiyasuddin Tughlaq led his army to Lukhnauti (Bengal) and captured it after a series of battles.

But as he and his favorite son Mahmud Khan were returning from Lakhnauti to Delhi, eldest son Ulugh Khan schemed to kill him inside a wooden structure (kushk) built and designed to collapse, making it appear like an accident.

Ghiyasuddin Tughlaq built the Tughlaqabad fort, making Tughlaqabad one of the 7 cities of Delhi.

Amir Khusrau wrote Tughlaq Namah during this time and he was also a contemporary of Sufi saint Nizamuddin Auliya.

Although his far-flung campaigns were expensive, each raid and attack on non-Muslim kingdoms brought new looted wealth and ransom payments from captured people, the Delhi Sultanate briefly expanded to most of the Indian subcontinent.

But eventually, rebellions spread over the Indian subcontinent on a regular basis, making it impossible to maintain the expanding empire.

Initially, he was tolerant towards all religions which is credited to him being the only sultan to receive literary, religious, and philosophical education.

He brought out many novel reforms even though they failed eventually:

In the 14th century, there was a global drop in the value of silver, which made minting coins difficult.

To overcome financial difficulties, he imposed heavy tax revenue in Doab, which led to a strong revolt from peasants (as at the same time a strong famine was also ravaging).

Later, Sultan launched a scheme by which ‘Takkavi loans’ (Loans for cultivation) were given to farmers to buy seeds and to extend cultivation.

He established a separate department for agriculture “diwan-i-kohi”.

Along with land taxes, dhimmis (non-Muslims) were required to pay crop taxes by giving up half or more of their harvested crop.

Revolts against Muhammad bin Tughlaq started in 1327 and continued throughout his reign and the sultanate shrunk after 1335:

The economic experiments of Muhammad bin Tughlaq resulted in a collapsed economy, and nearly a decade-long famine followed that killed numerous people in the countryside.

In 1327, he built the fourth city of Delhi, Jahanpanah, which was built enclosing the then inhabited area between Qila Rai Pithora and Siri.

Ibn Batuta, a traveler from Morocco visited India during the reign of Muhammad bin Tughlaq. He acted as the chief Qazi of the sultanate for 6 years. He wrote the book “Rihla”.

Muhammad Bin Tughlaq died in 1351 on his way to Thatta, Sindh, while he was campaigning in Sindh against Taghi, a Turkic slave tribe.

He was Muhammad bin Tughlaq’s 45-year-old cousin/nephew who took over after the latter’s death. He was of Turko-Indian origins as his mother was a Hindu princess.

He is termed as a mild and reluctant ruler, and was inept militarily as well, though he ruled for 37 years.

Firoz Shah Tughlaq tried to regain the old kingdom boundary by waging a war with Bengal for 11 months in 1359. However, Bengal did not fall and remained outside of Delhi Sultanate.

Similarly, Malwa and Gujarat also broke away and declared independence.

In 1360, on his way back from the Bengal campaign, he raided Odisha.

He appointed Khan-i-Jahan Maqbal, a Telugu Brahmin convert as Wazir of his kingdom to help him in day-to-day administration.

There were royal factories or Kharkhanas where thousands of slaves were employed.

He established a new town called Firozabad which was the 5th city of Delhi, which is now known as Firozshah Kotla. He repaired the Qutub Minar which was struck by lightning.

(Cities of Delhi till now:

Firoz Shah did not make any attempts to expand the territory but rather lost many regions to independent kingdoms.

His eldest son, Fateh Khan, died in 1376. Firuz shah then abdicated in August 1387 and made his other son, Prince Muhammad, king. A slave rebellion forced him to confer the royal title to his grandson, Tughluq Khan.

Firuz shah died in 1388 and was buried in Haus Khas. After his death struggle between nobles and the sultan broke and this further weakened the sultanate.

Tughluq Khan assumed power but died in the conflict. In 1389, Abu Bakr Shah assumed power, but he too died within a year. The civil war continued under Sultan Muhammad Shah, and by 1390, it had led to the seizure and execution of all Muslim nobility.

The sultanate started disintegrating with numerous rebellions and smaller Hindu and Muslim kingdoms asserting their independence.

The End of the Tughlaq dynasty

The number of claims on the throne created factions in the sultanate that fought with each other.

Battles occurred every month, switching of sides by amirs became common, and the civil war between the two Sultan factions continued through 1398, till the invasion by Timur.

In 1398, the Turko-Mongol invader, Timur the lame (Tamerlane) invaded and defeated the armies of the Sultanate.

Timur’s invasion and destruction of Delhi, subsequent rebellion, and massacre of the citizens created chaos and the city did not recover from this loss for almost a century.

Timur appointed Khizr Khan, the future founder of the succeeding Sayyid dynasty, as his viceroy at Delhi.

Hence 1414 marked the end of the Tughlaq dynasty’s rule in India.