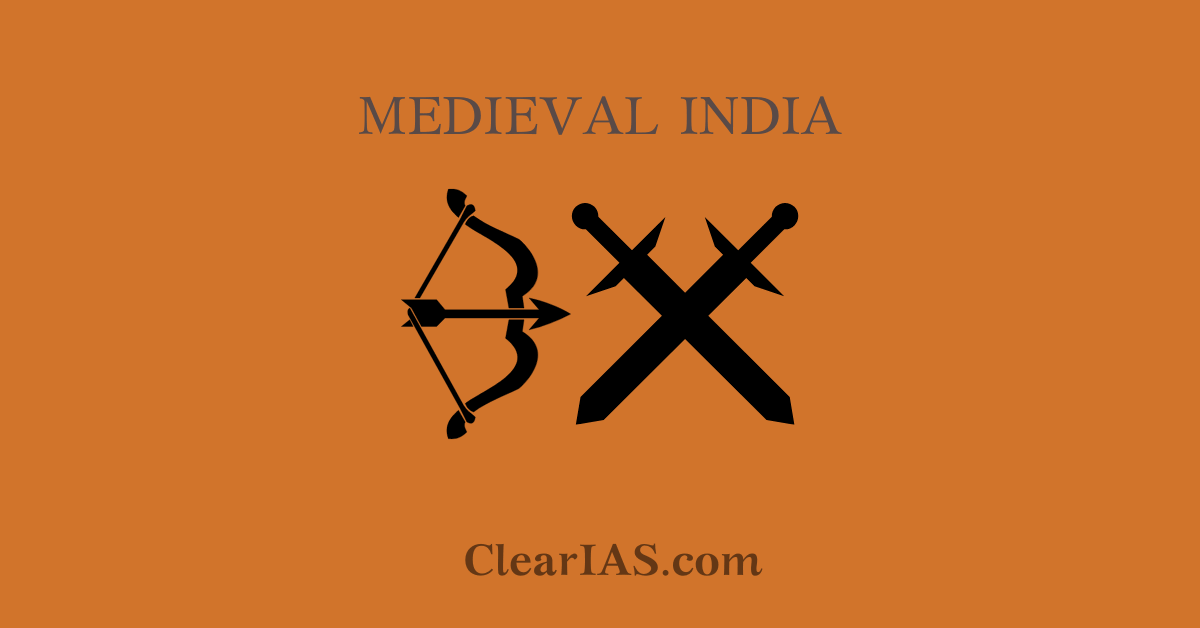 Mohammed Ghori entered India during the rule of the powerful Chauhan. The Battles of Tarain between Ghori and Chauhan led way to the establishment of Ghurid rule and eventually the Delhi sultanate in northern parts of India. Read here to know more about the events.

The arrival of Islam in India begins with Ghaznavid conquests, but as Ghazni became weaker, newer kingdoms arose which eventually turned towards the Indian subcontinent leading to the establishment of the first Islamic dynasties in India.

By the middle of the 12th Century, Buddhist and Pagan Turks from Central Asia raided the Middle East and shattered the power of the Seljuk Turks in Persia.

This led to a power vacuum in middle-east leading to the rise of two new empires:

The Ghurids were earlier vassals of the Ghaznavids but later became the overlords as the Ghazni became weak.

The ghurid power increased under Sultan Alauddin who was also known as Jahan-soz (the world burner).

However, the powerful Khwarizmi Empire of Iran conquered Central Asia forcing the Ghurids to expand toward India.

In 1173, Shahabuddin Muhammad (a.k.a. Muizzuddin Muhammad bin Sam) or Muhammad Ghori took the throne of Ghazni, while his elder brother ruled from Ghur.

Muhammad Ghori marched through the Gomal pass in 1175 CE and annexed Multan and Uchch. In 1178 CE he attacked Gujarat but was defeated by Bhima II of the Solanki dynasty near Mount Abu.

He turned towards Punjab to build a base to launch future attacks into India but came face to face with powerful Chuahans.

The Chauhan dynasty of India

Meanwhile in India, the Chauhans were becoming powerful and they had captured Delhi (Dhillika) from the Tomars.

The expansion of Chauhan power towards Punjab brought them into conflict with the Ghurids of Afghanistan.

While Muhammad Ghori overran Multan and Uchch, the 11-year-old Prithviraj III of the Chauhan dynasty ascended the throne at Ajmer.

Prithviraj attacked Gujarat which was ruled by Bhima II (Chaulukya/Solanki), who had already defeated Muhammad Ghori. Now Bhima II defeated Prithviraj as well which led to a peace treaty between them.

As the expansion of Chauhans to the south was halted by the peace treaty, Prithviraj turned north towards Punjab and the conquests between Chauhans and Ghurids started over the claim on Tabarhinda (modern-day Bathinda).

The Battles of Tarain

The Tarain battles changed the course of the history of the Indian subcontinent as they led to the establishment of the first Islamic sultanates in India. Both the battles were fought between Mohammed Ghori and Prithviraj Chauhan.

Aftermaths of Battles of Tarain

After the Battles of Tarain, the Ghurid armies captured the forts of Hansi, Saraswati, and Samana. Then they attacked and captured Ajmer.

The Tomar ruler of Delhi was also ousted soon and Delhi and eastern Rajasthan came under Ghurid rule.

Ghori went back to Afghanistan and left behind Ghurid generals who continued to attack and conquer neighboring lands.

The powerful Gahadavala kingdom was still seated at Kanauj after the second Battle of Tarain.

After Tarain, Muhammad Ghori returned to Ghazni and left India in charge of his slave general Qutbuddin Aibak.

Battle of Chandawar: The battle between Muhammad Ghori and Jaichandra takes place in Chandawar where Jaichandra was defeated and killed in action.

Another slave general, Bakhtiyar Khalji was appointed in charge of the areas east of Benaras. He made frequent raids into Bihar, because of the power vacuum there.

The Sena dynasty replaced the Palas in Bengal. They are said to have their origins in Karnataka.

The founder of the Sena kingdom was Samanta Sen.

Ballala Sena (1158-1179 CE) conquered Gaur from the Pala and became the ruler of the Bengal Delta. He made Nabadwip his capital. Ballala Sena married Ramadevi a princess of the Western Chalukya Empire which indicates that the Sena rulers maintained close social contact with southern India.

In 1179 CE, Lakshmana Sena succeeded Ballala Sena and ruled Bengal for approximately 20 years. He expanded the Sena Empire to Odisha, Bihar, and probably to Varanasi.

Bakhtiyar Khalji and his men entered the palace undetected, posing as horse merchants, and made a sudden attack. Lakshman Sen managed to escape and took refuge in Sonargaon (modern-day Bangladesh).

Bakhtiyar Khalji was formally appointed governor of Bengal by Muhammad Ghori, but he ruled it as an independent ruler.

He wanted to expand eastwards and undertook an expedition into the Brahmaputra valley.

The end of the Ghurid dynasty

On his way back to Delhi, he was killed by an Arab Muslim fanatic of a rival sect who believed that Turks still stuck to their pagan practices from Central Asia and converted to Islam only for political or financial gains.

This ended the Ghurid dynasty in India, but Ghori’s generals who started establishing independent dynasties in India were still left behind, and thus began the Delhi sultanate.

This marked the beginning of 320 years of the Delhi sultanate: