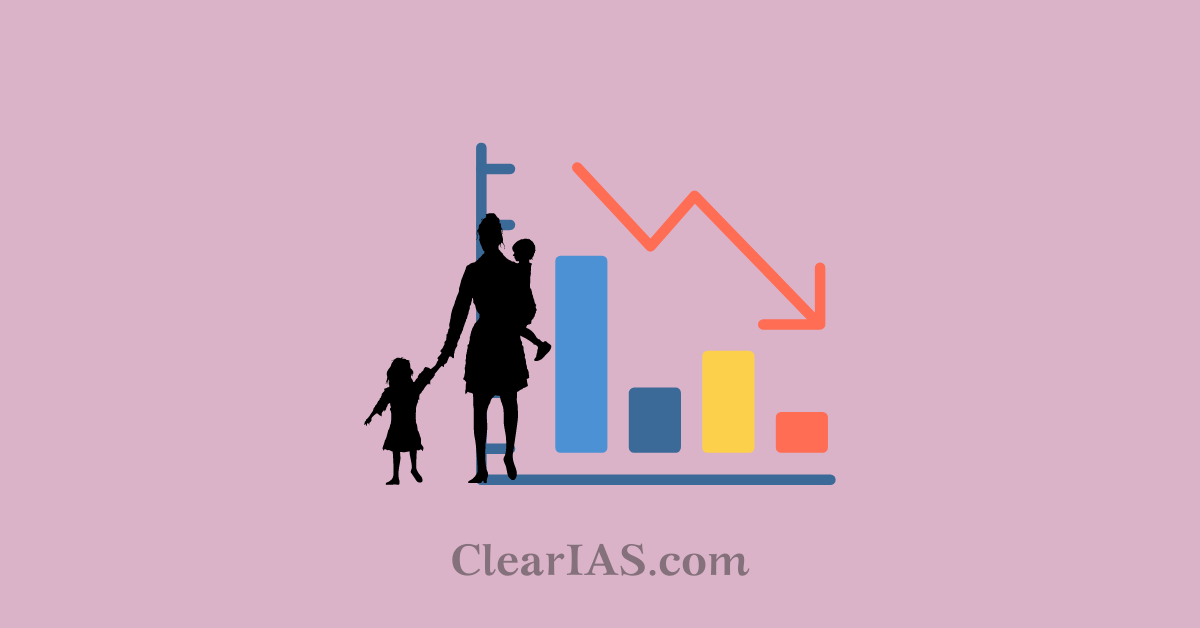 Total Fertility rate (TFR) is an important factor in population growth. Read here to know about the declining fertility rate in India.

The Total fertility rate (TFR) has declined from 2.2 (reported in 2015-16) to 2.0 at the all- India level, according to the latest National Family Health Survey of India OR NFHS- 5 (phase 2) released by Union Health Ministry.

The NFHS-5 (National Family Health Survey) for 2019-2021 was conducted in around 6.1 lakh sample households from 707 districts of the country, covering 7,24,115 women and 1,01,839 men to provide disaggregated estimates up to the district level.

There are 1,020 women per 1,000 men in India according to the recently released Fifth Edition (NFHS-5). Such a sex ratio has not been recorded in any of the previous four editions of the NFHS.

Why is the Replacement Level Fertility rate 2.1 and not 2?

The TFR of 2.1 ensures the replacement of the woman and her partner. Another 0.1 children per woman are included to counteract infant mortality.

United Nations (UN) projects that the global human population may increase from 7.8 billion in 2020 to 10.9 billion by 2100. A 40% population increase would have a strong impact on economies, food production, environment, and global climate. Based on these observations and the ongoing global decline in TFR, the United Nations through its medium projection model has predicted that TFR in all countries will converge to near replacement level (2.1) during the decades up to 2100.

Hence it is important to understand the causes of population growth for aspects of international and national planning for the future.

Key indicators for India in NFHS-5

The key factors or indicators for determining the fertility rates in India are listed below. These indicators were made use to compile the data in NFHS-5.

What does the Total fertility Rate in India indicate?

According to the United Nations’s population division, countries experiencing below replacement facility (lower than 2.1 children per woman), indicates that a generation is not producing enough children to replace itself, eventually leading to a reduction in population.

Mortality rates: Infant and child mortality rates have improved since the previous round. The steepest fall has been recorded in the mortality rate of children under 5 – from 49.7 to 41.9 deaths per 1,000 live births.

Vaccination rates: Similarly, vaccination rates have improved since NFHS-4. The fraction of fully vaccinated children between the ages of 12 and 23 months has gone up from 62% to 76%, along with the rates of partial vaccination.

Childhood diseases: ‘Childhood diseases’ present a more mixed picture. While the prevalence of diarrhea in the two weeks preceding the survey dipped slightly in NFHS-5, the fraction of children receiving ORS and zinc for diarrhea has gone up substantially.

While there has been some progress, India isn’t making as much progress as it should have towards SDG 2.2 – since the percentage of stunted, wasted, underweight, and anemic children in India is 36%, 19%, 32%, and 67%, respectively.

What are the reasons for the fertility rates decline?

Many factors like education (mean school years for females), economy (Gross Domestic Product), religious beliefs, contraceptive prevalence rate (CPR), the strength of family planning programs, etc influence the fertility rates of a country. These factors play an important role in the current decline in the fertility rate in India also, as listed below:

The low Fertility Rates in India eventually will lead to a decline in population like in developed countries such as Japan, Germany, and Russia. Hence, the focus on limiting the family size can be reduced.

The need of the hour now is to divert the attention to other matters like: