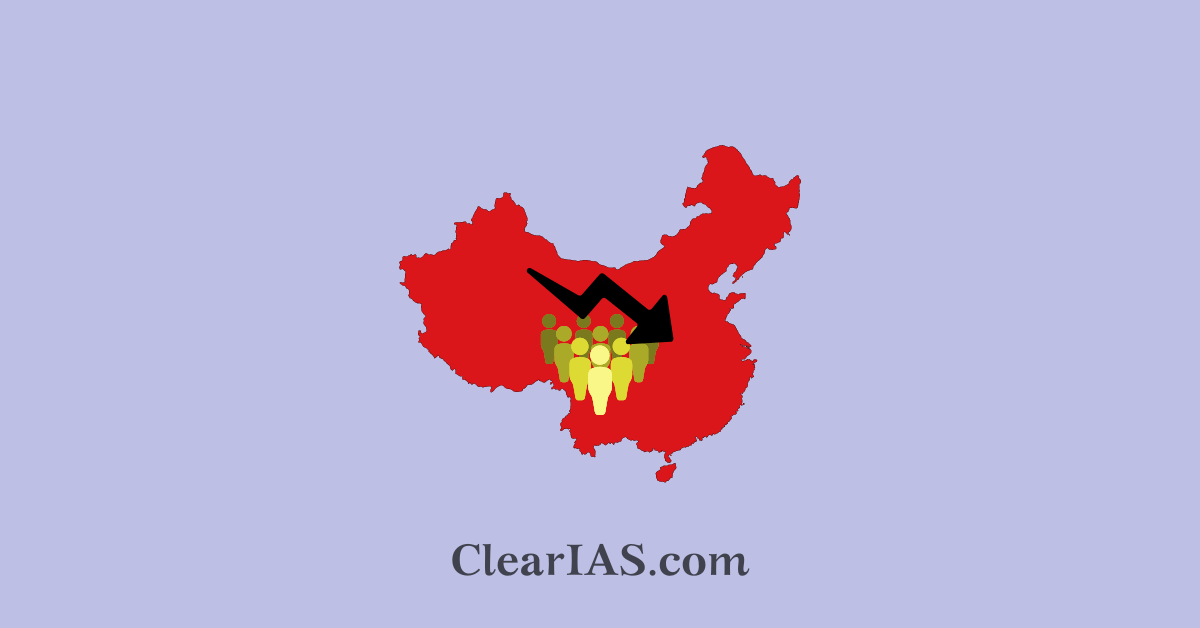 China’s population declined for the first time in 60 years according to the National Bureau of Statistics of China. It is widely believed that the mishandled family planning measure is the prime reason for the decline. Read here to understand the global implications of the Chinese demographic change.

This is a historic occasion for a nation that will soon lose its title as the nation with the most people to India (according to UN estimates, India’s population will exceed 1,428.6 million in 2023).

The population decline in China and the population growth in India could have significant effects, particularly on the global economy.

But the most recent population fall is not a passing trend. The world’s most populous nation experiencing a population decline of up to 8,50,000 in 2022 will have a profound impact on both China and the rest of the world.

Lessons can be learned from China’s demographic tale by nations that have attempted significant social engineering efforts.

According to a study by the Research Institute of Economy, Trade, and Industry of Japan, the proportion of children and elderly people in China in 2020 was comparable to that in Japan in 1990.

There are also societal repercussions-

China’s problems may affect the rest of the globe because of its importance as the engine of the global economy.

Such problems are not exclusive to China. The population is aging quickly in other East Asian nations as well, including South Korea and Japan.

The situation in China, however, is unique. Its population is aging and declining yet it is still a middle-income nation, which makes financing socio-economic development more difficult.

Response of the Chinese government

Officials in China have increased their efforts to support larger families, notably through a multi-agency plan unveiled last year to expand maternity leave and provide tax discounts and other benefits to families.

They want to create a legislative framework that will increase fertility rates while lowering the price of childbearing, childrearing, and education.

They also intend to develop aged care programs and services, implement a proactive national policy in response to population aging, and improve services for elderly persons who are living alone.

The common people are asking for wider national reforms. Issues like low salaries and high rents increase the financial pressure on the earning member.

There have been many opinions that the population decrease is good as it would free up more resources needed to increase the standard of living and boost economic growth.

Some researchers think that the smaller population will benefit from climate change and the environment, especially during the exponentially accelerating global warming and biodiversity loss.

The world’s population expansion makes it difficult to end global hunger and poverty, as well as to slow down climate change, but China is not the only country that is concerned about its population loss and its age demographics, which are becoming more skewed.

Due to low birth rates and outward migration, the U.N. predicts that 61 nations or territories would see population declines of 1% or more between 2022 and 2050.

The World Health Organization predicts that by 2030, one in six persons would be 60 years old or older.