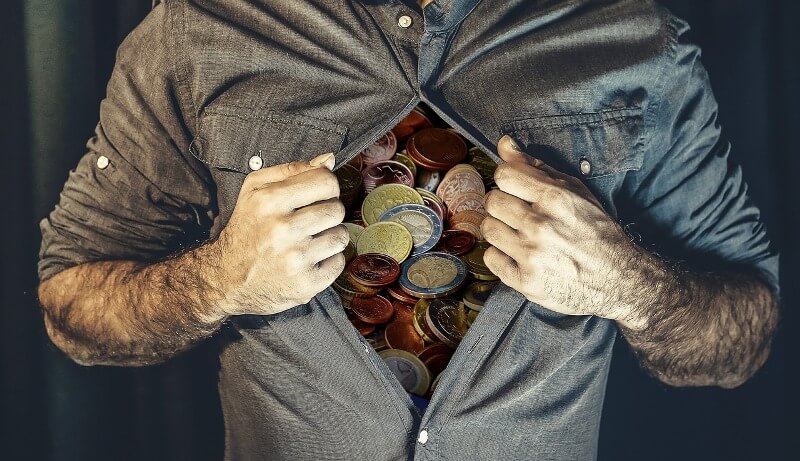 You all may have heard of the term ‘capital’ in economics. Adam Smith defines capital as “That part of man’s stock which he expects to afford him revenue”. Capital is one of the four factors of production – land, labour, and entrepreneurship being the other three.

Physical Capital: Physical capital is related to the non-human assets which help in the production process.  It includes machinery, buildings, computers, etc – which is tangible in nature. Physical capital is divided into 2 categories – working capital and fixed capital.

Human Capital: Human capital is connected with human assets – education, health, or skills. It cannot be touched, however, it can be measured and analysed.

What is Human Capital?

Human capital is a term that denotes the monetary value of the knowledge, skills, and competencies of a person.

To calculate the human capital of an individual, you need to take his earnings today and add with it what he is likely to earn in future.

In the manufacturing economy, humans are counted as ‘labour’ – one of the four factors of production. In that sense, an individual is a resource – ie. labour/worker.

However, as we moved from a manufacturing economy to an informational economy, there is a paradigm shift in the way humans are seen. A human being is now not seen as a resource/labour, but rather is seen as an asset or capital. Hence the term ‘Human Capital’. Remember what we mentioned in the beginning – capital is also one of the four factors of production.

According to the OECD, human capital is defined as:

“the knowledge, skills, competencies and other attributes embodied in individuals or groups of individuals acquired during their life and used to produce goods, services or ideas in market circumstances”.

Human capital is viewed in terms of its value with respect to an organization or country.

To Increase Human Capital, Where should you invest?

Generally, human capital formation is considered as the outcome of investments in

Clearly, three of the most important pillars of human capital are Education, Health and Skills/Employment.

These are precisely the three vehicles through which various governments are focusing to build the human capital of next-generation citizens.

In this article we will focus on human capital in general, emphasizing on Human Development Report. We have already written on Education, Health, and Skill/Employment, however, you can expect more elaborate articles on the same from us in future, covering the entire gamut of human capital.

Though both terms are used interchangeably, there is a difference between the two concepts:

It is from the 7th Five Year Plan onward that we began to focus on Human Development. To quote the Plan document, “Human resources development has necessarily to be assigned a key role in any development strategy, particularly in a country with a large population. Trained and educated on sound lines, a large population can itself become an asset in accelerating economic growth and ensuring a social change in desired directions“.

Where does India stand in terms of Human Capital or Human Development?

India’s achievements in this field are not that envious.

Amartya Sen, in his book, ‘An Uncertain Glory: India and Its Contradictions ‘ opined that: India should invest in its public services. Leaving aside her per capita income, which has grown impressively, India is falling behind its neighbours in South Asia in the social indicators.

Human Development Agenda of the Government

Be that as it may, human development is an important agenda in government policies. Economic Survey 2018-19 has opined that: ‘Inclusiveness has been the cornerstone of India’s development agenda. Over the last few years, efforts in this direction have been accelerated by the Government through the mantra of inclusiveness ‘Sabka Sath, Sabka Vikas’, further elaborated by ensuring ‘Sabka Vishwas’. As India is a developing economy with resource constraints, we have to prioritize and optimize the expenditure on social infrastructure to promote sustainable and inclusive growth. It is critical at this juncture to focus on public investments in human capital and strengthen the delivery mechanisms of government interventions to ensure transparency and accountability. With India having the demographic advantage, improving educational standards, skilling the youth, enhancing job opportunities, reducing disease burden and empowering women will help in realizing the potential of a buoyant economy in the future.

India is home to the world’s youngest population as half of its population is below the age of 25.

This demographic advantage in India is available for five decades from 2005-06 to 2055-56, longer than any other country in the world.

This demographic advantage can be reaped only if education, skilling, and employment opportunities are provided to the young population.

HDR 2016 has opined that India’s economic progress since 1991 has not been translated to human investment, resulting in a lost decade for India. Universalizing health and education could have pulled the population out of the poverty trap. There is a need to ask the question: who had benefited from the development and why only them?

Between 1990 and 2017, India’s HDI value increased from 0.427 to 0.640, an increase of nearly 50 percent. Within South Asia, India’s HDI value is above the average of 0.638 for the region, with Bangladesh and Pakistan, countries with similar population size, being ranked 136 and 150 respectively.

Between 1990 and 2017, India’s life expectancy at birth increased by nearly 11 years, with more significant gains in expected years of schooling.

Today’s Indian school-age children can expect to stay in school for 4.7 years longer than in 1990.

Disparities between and within countries continue to stifle progress. Scrutiny of HDI’s components reveals the unequal distribution of outcomes in education, life expectancy and income within countries. The Inequality-Adjusted Human Development Index (IHDI) compares levels of inequality within countries.

26.8% of India’s HDI value is lost on account of inequalities, which is more than its South Asian neighbours. This confirms that inequality remains a challenge for India as it progresses economically. State-level HDIs reveal the inter-state disparities in India.

Subnational Human Development Index (SHDI) for different States for the period 1990 and 2017, released by UNDP shows that all states have shown significant improvement in levels of human development. Most Southern and Northern States have performed much better as compared to their Eastern counterparts who have registered poor performance in SHDIs. Goa, Kerala, Himachal Pradesh, and Punjab occupy the top four positions while Bihar, UP, and MP are at the bottom.

Francine Pickup, Country Director, UNDP India said, “The Government of India is committed to improving the quality of life for all its people. The success of India’s national development schemes like Beti Bachao Beti Padhao, Swachh Bharat, Make in India, and initiatives aimed at universalizing school education and health care, will be crucial in ensuring that the upward trend on human development accelerates and also achieve the Prime Minister’s vision of development for all and the key principle of the Sustainable Development Goals — to leave no one behind.”

Gender gaps in the early years are closing, but inequalities persist in adulthood. Despite considerable progress at the policy and legislative levels, women remain significantly less politically, economically and socially empowered than men. Only 39 percent of adult women have reached at least a secondary level of education as compared to 64 percent of males. Female participation in the labor market is 27.2 percent compared to 78.8 for men. India ranks 127 out of 160 countries on the Gender Inequality Index.

Quality of Development should also be kept in focus apart from HDI numbers. 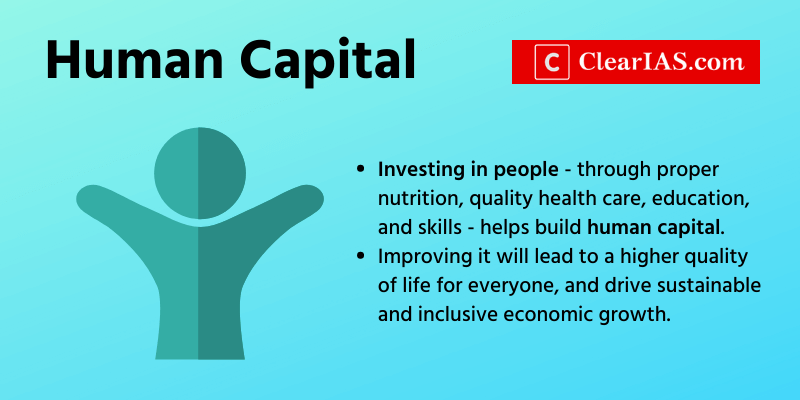 The 17 SDGs and 169 targets envisaged in the Agenda 2030 are closely interrelated with social infrastructure.

With the underlying dimensions of education and health embedded in SDGs, the improvement in the Human Development Index is also interlinked to SDGs.

We will look into specific goals of SDG which are related to Human Development in later sections.

Since it is hard to establish a co-relation of visible cause and effect from the growth of human capital (education, health etc.) to economic growth, there is low political will and investment in this sector. But investments in human capital can’t be outsourced to private players completely. Government intervention is essential in this field because:

Thus because of both the intrinsic value and instrumental value of human capital, the government should actively involve itself in this arena.

With a slew of measures and policies like New Education Policy, New Health Policy and legislation like the National Medical Commission etc., the government is focusing on milking the demographic dividend. Concurrently, as per the Economic Survey, the government’s expenditure on social sector has also increased.

Human Capital as per the Economic Survey of India

To engineer an inclusive and sustainable growth for India, the social infrastructure like education, health and social protection are being given utmost priority by the Government. The Government has been enhancing the expenditure on human capital along with adopting measures to improve the efficiency of expenditure by a convergence of schemes. Several labour reform measures including legislative ones are being implemented for the creation of employment opportunities and for providing sustainable livelihoods for the population who are largely engaged in the informal economy. Bridging the gender gaps in education, skill development, employment, earnings and reducing social inequalities prevalent in the society have been the underlying goals of the development strategy to enhance human capabilities.

Government expenditure on social infrastructures like health and education reflects the government’s commitment to these sectors.

It is also necessary for improving accessibility for marginal and vulnerable sections of society.

The expenditure on social services by the Centre and States as a proportion of GDP has increased by more than 1% points during the period 2014-15 to 2018-19.

The increase was spread across all social sectors.

Human capital is a term that denotes the economic value of the knowledge, skills, and competencies of a person.

For a country like India, with a one-time huge opportunity of demographic dividend, it’s high time to focus on human capital.

Unless, we give adequate stress to education, health and skills – we will lose this golden opportunity.

As of now, our rank in various indices – human capital and human resource – is not encouraging. Both government and private entities should give better focus on the same.