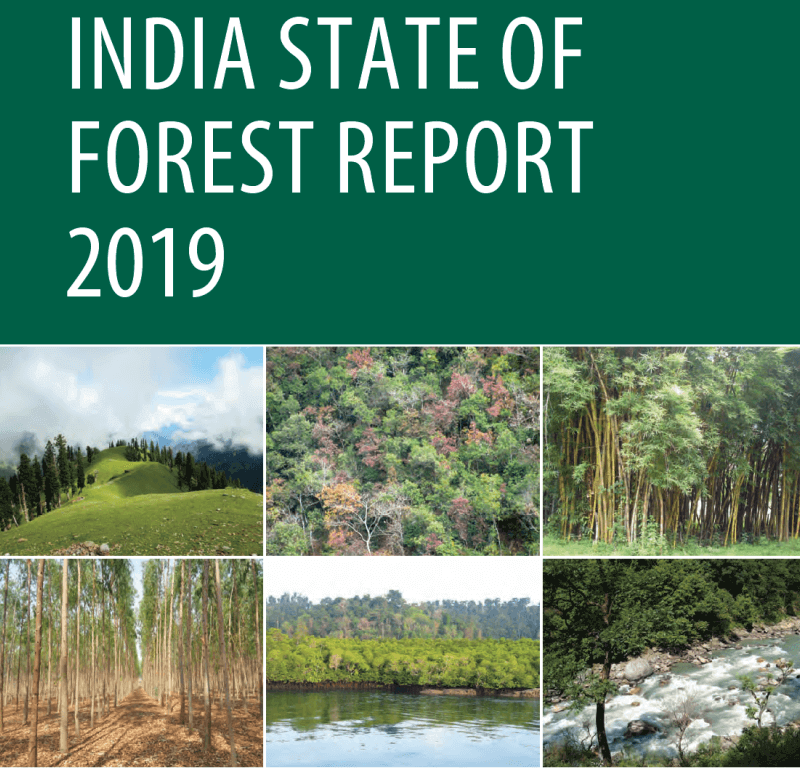 India State of Forest Report (ISFR) is prepared by the Forest Survey of India (Ministry of Environment Forest and Climate Change) about the forest resources of India.

The release of the biennial India State of Forest Report (ISFR) published by the Forest Survey of India (FSI) is one of the most awaited events in India.

ISFR 2019 is the 16th biennial assessment report of FSI.

There has been an increase of over 5000 sq km of forest and tree cover as compared to the previous assessment.

The key findings of the ISFR 2019 are as follows:

There is an increase in forest and tree cover

Forest cover within the RFA/GW has shown a slight decrease of 330 sq km (0.05%) whereas there is an increase of 4,306 sq km of forest cover outside the RFA/GW as compared to the previous assessment of 2017.

The highest increase in forest cover is in Karnataka

In tribal districts, the forest cover is 37.54%

In the North-Eastern region, the forest cover is 65.05%

Mangrove cover shows an increase of 1.10%

Mangrove cover in the country has increased by 54 sq km (1.10%) as compared to the previous assessment.

There is an increase in the bamboo bearing area

The total Carbon Stock in the forest is 7124.6 million tonnes

Soil Organic Carbon (SOC) represents the largest pool of carbon stock in forests, which has been estimated at 4,004 million tonnes. The SOC contributes 56% to the total forest carbon stock of the country.

Highest dependence on forests for fuelwood is in Maharashtra

Dependence of fuelwood on forests is highest in the State of Maharashtra, whereas, for fodder, small timber and bamboo, dependence is highest in Madhya Pradesh. It has been assessed that the annual removal of the small timber by the people living in forest fringe villages is nearly 7% of the average annual yield of forests in the country.

The information on the area affected by five major invasive species in States/UTs based on analysis of NFI data has been given in the present ISFR.

Fire prone forest areas of different severity classes have been mapped in the grids of 5km x 5km based on the frequency of forest fires. The analysis reveals that 21.40% of the forest cover of the country is highly to extremely fire-prone.