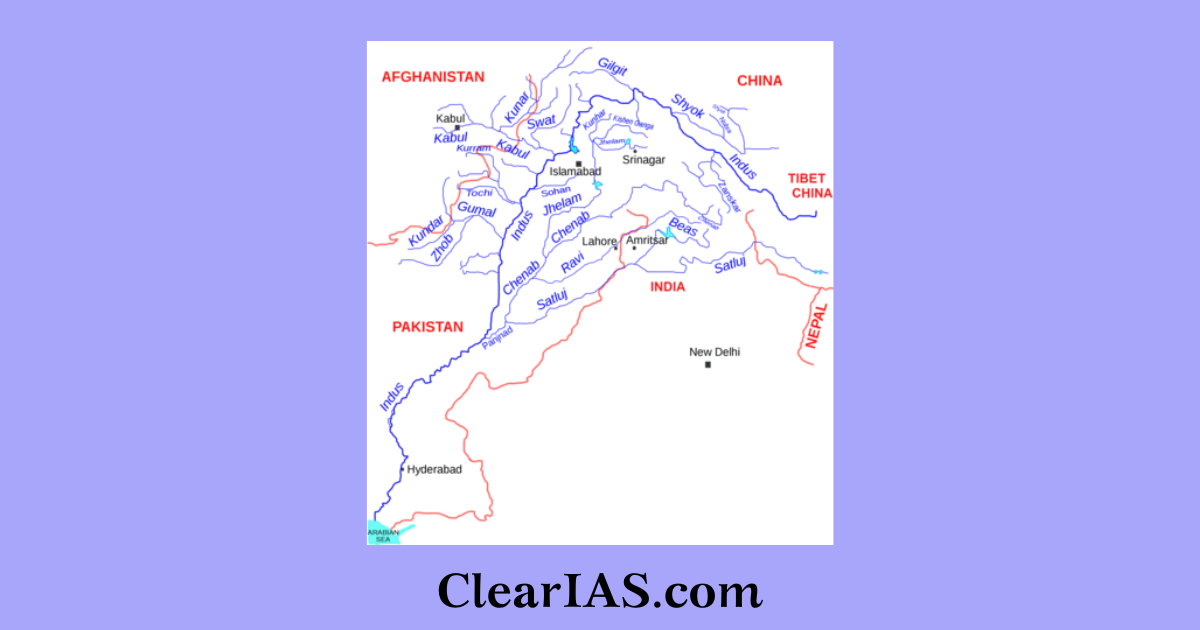 What is the geographical extent of the Indus river system? Which are its various tributaries? Read to know more.

The Himalayan river systems comprise the Ganga, the Brahmaputra, and the Indus.

The deep gorges of the Indus, Satluj, Brahmaputra and other rivers amply demonstrate that they predate the Himalayas.

India derives its name from the name Indus. Indus River System, a Himalayan river system, is one of the world’s largest river basins.

Around this river, “The Indus Valley Civilization” first emerged.

Sindhu is another name for the Indus River. As a result, the Sindhu River System is a component of one of the world’s and the Indian subcontinent’s most fertile regions.

The river passes through Pakistan, India, and China’s Tibetan areas. It is referred to as Singi Khambai or Lion’s mouth in Tibet.

It comes from a glacier in Bokhar Chu in the Tibetan area, located at an elevation of 4,164 m, in the Kailash Mountain range close to Mansarovar Lake.

The river originates in an area called Demchok and runs northwest before joining the Ladakh region of India. The Indus River flows between the Ladakh and Karakoram ranges but is more closely situated to the latter.

The other Himalayan tributaries of the Indus include Gilgit, Garstang, Dras, Shiger, and Hunza. After passing through Gilgit, the river makes a southerly bend before turning west and entering Khyber Pakhtunkhawa, Pakistan’s northwest frontier province.

The collected waters of the five eastern tributaries—the Jhelum, the Chenab, the Ravi, the Beas, and the Satluj—arrive at the Indus from Panjnad (Panchnad) just before Mithankot.

The Bara Lacha Pass area of the Lahul-Spiti section of the Zaskar Range is where the Chenab originates. In the upper Himalayas in the Lahul and Spiti District of Himachal Pradesh, the confluence of the Chandra and Bhaga rivers at Tandi creates the Chenab River.

It is also referred to as the Chandrabhaga in its upper reaches. According to the Indus Water Treaty, Pakistan is given access to the Chenab’s waters.

The world’s tallest railroad bridge, known as Chenab Bridge, spans the river in J&K. It passes through the Jammu area of J&K before entering Pakistan’s Punjab plains.

Sometimes, Sutlej is referred to as the red river. It begins beyond the Indian border on the southern slopes of the Kailash Mountain, not far from Mansarovar Lake and Rakas Lake.

The river flows south-westerly through the districts of Kinnaur, Shimla, Kullu, Solan, Mandi, and Bilaspur before entering HP at Shipki La.

Sutlej exits Himachal and enters the Punjabi plains near Bhakra. Here the highest gravity dam in the world, the Bhakra Nangal Dam, has been built.

According to the Indus Water Treaty between India and Pakistan, India is given access to the Sutlej River’s waters, mostly used for power generation and irrigation of numerous major canals.

Rohtang pass in HP is where the Beas Watercourse, a vital river of the Indus River System, originates. At Hari-Ke-Pattan in Punjab, the river combines with the Sutlej River before entering Pakistan.

It travels through the Dhaola Dhar mountain range before turning southwest and merging with the Satluj river in Harike in Punjab.

It is a relatively little river, barely 460 km long, and wholly located within Indian territory. Manali’s tourist resorts are on the River Beas’s right bank.

It turns southwest after crossing Chamba and carves a deep valley in the Dhaola Dhar mountain. Near Madhopur, it reaches the Punjab Plains before moving to Pakistan below Amritsar.

In Pakistani Punjab, it empties into the Chenab just above Rangpur.

In the southeast corner of the Kashmir Valley, at Verinag, spring serves as the Jhelum’s source. It empties into Wular Lake from the north (north-western part of Kashmir Valley). It shifts its path southward from Wular Lake. The river flows into a gorge in the hills of Baramulla.

Below Baramula, the river carves out a slender valley through the Pir Panjal Range. The river makes a tight zigzag curve southward at Muzaffarabad.

Following that, it creates the border between India and Pakistan for 170 km before emerging at the Potwar Plateau close to Mirpur.

It debouches (emerges from a confined space into a broad, open area) into the plains close to the city of Jhelum after running through the spurs of the Salt Range.

At Trimmu, it connects to the Chenab.