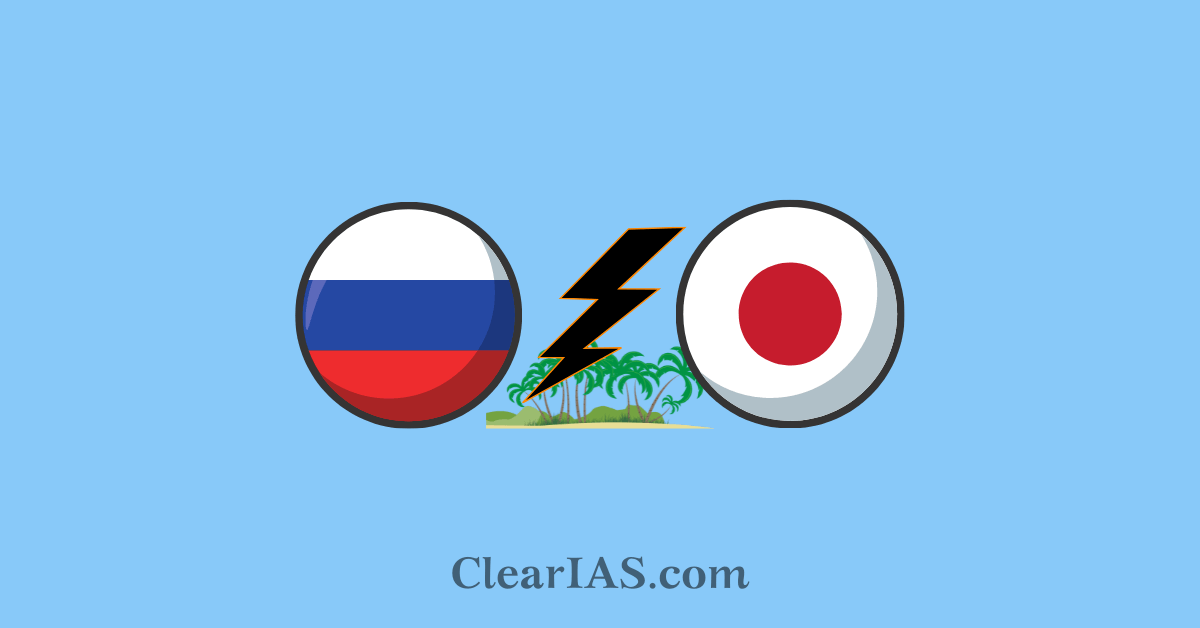 Kuril Islands dispute is a territorial dispute between Japan and Russia over a chain of islands in the North Pacific Ocean. Read here to know more about the dispute.

Japan described four islands whose ownership it disputes with Russia as illegally occupied in the latest version of a diplomatic Bluebook (Diplomatic bluebook of Japan is an annual report on Japan’s foreign policy and international diplomacy published since 1957).

Russia refers to these islands as the Kuril Islands, whereas Japan calls them part of their Northern territories.

Japan is also having a similar dispute regarding Northern territories with South Korea.  South Korea refers to the islands as Dokdo islands.

The geographic location of the Kuril Islands The Kuril Islands are a chain of islands stretching from the Japanese island of Hokkaido to the southern tip of Russia’s Kamchatka Peninsula.

The islands separate the Okhotsk Sea from the North Pacific Ocean.

It consists of 56 islands and minor rocks. The dispute is concerning four islands.

The islands are part of the Ring of Fire belt of geologic instability circling the Pacific.

The islands in dispute are:

These islands are known as Southern Kurils by Russia whereas Japan calls them the Northern Territories.

The Kurils were originally inhabited by the Ainu people. Later after several explorations in the 17th and 18th centuries, they were later settled by the Russians and Japanese.

Agreements between Japan and Russia over the Kuril Islands

The first Russo-Japanese agreement to deal with the status of Sakhalin and the Kuril Islands was the 1855 Treaty of Shimoda, which first established official relations between Russia and Japan.

In 1855, Japan and Russia concluded the Treaty of Shimoda, which gave control of the four southernmost islands to Japan and the remainder of the chain to Russia.

In the Treaty of Saint Petersburg, signed between the two countries in 1875, Russia ceded possession of the Kurils to Japan in exchange for uncontested control of Sakhalin Island.

The Russo-Japanese War of 1904–5 was a military disaster for Russia. The 1905 Treaty of Portsmouth, which concluded at the end of this war, gave the southern half of Sakhalin Island to Japan.

During World War II Japan was an ally of Germany and USSR had an understanding of it. But later on, Soviet and Japanese soldiers were on opposite sides.

In 1945, as part of the Yalta agreements (formalized in the 1951 Treaty of Peace with Japan), the islands were ceded to the Soviet Union, and the Japanese population was repatriated and replaced by the Soviets.

This treaty was signed between the Allies and Japan in 1951 and stated that Japan must give up all right, title, and claim to the Kuril Islands, but it also does not recognize the Soviet Union’s sovereignty over them.

The above two treaties after World war complicated the issues further leading to modern-day disputes over the Kuril Islands.

In 1956, diplomatic ties were restored between Japan and Russia by Japan-Soviet Joint Declaration.

During the 1956 peace talks between Japan and the Soviet Union, the Soviet side proposed to settle the dispute by returning Shikotan and Habomai to Japan.

Japan agreed to this and the declaration ended the state of war between the two countries. But the Kuril Islands dispute persisted in the form of interpretation of territorial provisions.

Despite a series of agreements, the dispute continues and Japan still claims historical rights to the southernmost islands and has tried repeatedly to persuade the Soviet Union and, from 1991, Russia to return those islands to Japanese sovereignty.

In 2018, the Russian President and the Japanese Prime Minister met on the sidelines of the East Asia Summit and decided to end the territorial dispute with the Japanese PM agreeing to negotiate based on the 1956 declaration.

This showed that Japan has given up the two islands to maintain peace with Russia.

However, Russia indicated that the joint declaration signed by Japan and the Soviet Union in 1956 neither mentions a basis for returning Habomai and Shikotan nor clarifies which country has sovereignty over the islands.

In 2019, the Japanese PM made it clear that the country is not in the favour of withdrawing control over the Islands. Japan also believes that the islands are an inherent part of the nation’s territory, therefore, it aims to sign the peace treaty after the territorial issue is resolved.

Why are the Kuril Islands been contested so aggressively by two developed nations? The major reason is resources.

Tourism is also a potential source of huge income, as the islands have several volcanoes and a variety of birdlife that can be utilized for adventure activities.

In 2020, Russia deployed missile systems in the region and also plans a submarine project, and intends to prevent any American military use of the islands.

The Japanese people, especially conservatives in Hokkaido, are emotionally attached to the islands.

The European Parliament 2005 called on Russia to return to Japan to the occupied south Kuril Islands.

The United States recognizes Japan’s sovereignty over the islands.

China has gone back and forth on the issue depending on its relation with Russia.

The South Korean government has mostly kept a neutral stance over the Russia-Japan dispute as it also has claims over what it calls Dokdo Islands. South Korea and Japan are in a diplomatic dispute over this for more than 300 years.

The interest of both countries cannot be satisfied fully in any agreement on this issue but a midway has to be devised.

The militarization of the islands by Russia is considered to be its strategy to strengthen its position in the pacific via the North Sea route which worries Japan.

The interests of the Ainu people should also be taken into account as they are the native inhabitants of the islands.

The resolution of the dispute is important or else it will add to the already unstable indo-pacific region.