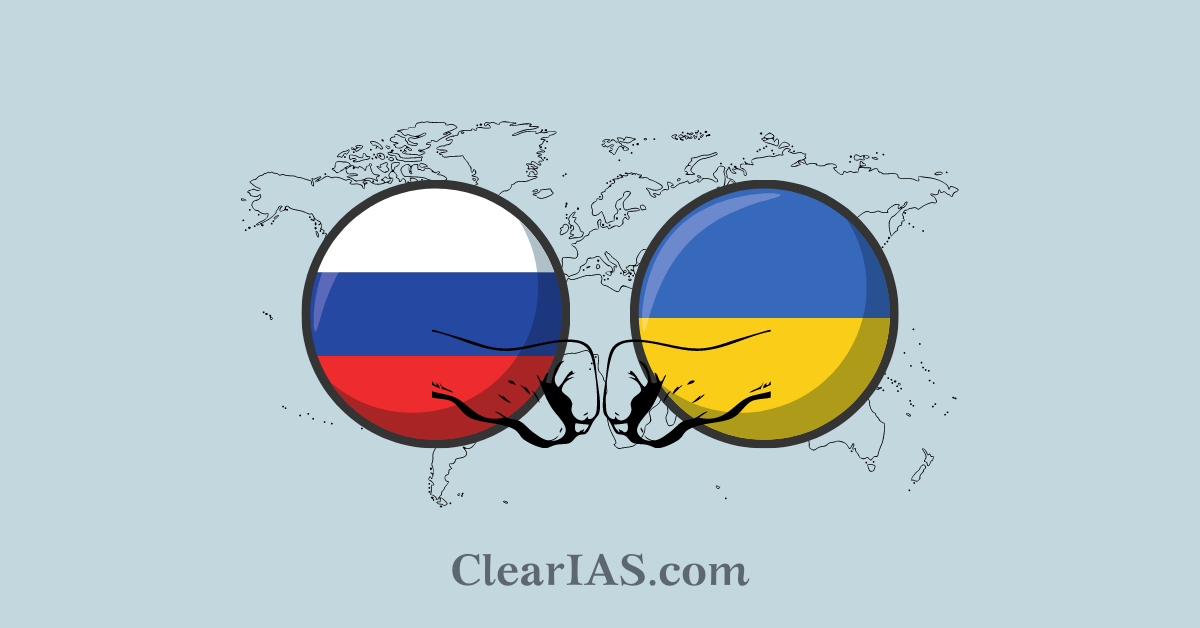 The Russia-Ukraine conflict has been in news. Read here to know more about the background, geopolitical aspects, and the present situation of the conflict.

Russia amassed a large number of troops near the Russia-Ukraine border sparking apprehensions on an impending war between the two countries and possible annexation of Ukraine.

What led to the Russia-Ukraine Conflict?

In December 2021, Russia published an 8-point draft security agreement for the West. The draft was aimed at resolving tensions in Europe including the Ukrainian crisis.

But it had controversial provisions including banning Ukraine from joining the North Atlantic Treaty Organization (NATO), curtailing the further expansion of NATO, blocking drills in the region, etc.

Talks on the draft failed continuously and tensions escalated with the  Russian troop buildup in the Russia-Ukraine border.

The crisis has grabbed global headlines and has been dubbed to be capable of triggering a new “cold war” or even a “third world war”. 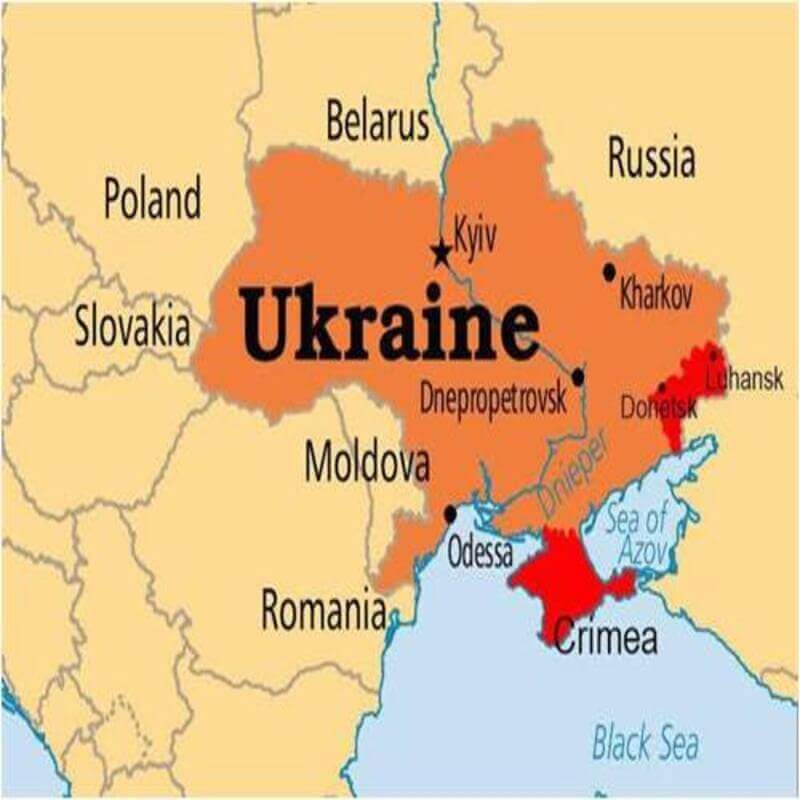 With over 6 lakh sq. km area and more than 40 million populations, Ukraine is the second-largest country by area and the 8th populous in Europe.

Ukraine is bordered by Russia in the East, Belarus in the North, Poland, Slovakia, Hungary, Romania, and Moldova in the West. It also has a maritime boundary with the Black Sea and the Sea of Azov.

Ukraine was under different rulers including the Ottoman Empire, Russian Empire, and the Soviet Union.

It gained independence in 1991 following the disintegration of the Soviet Union.

Following the 2004 Presidential election in Ukraine, a series of protests and civil unrest occurred in the country, dubbed the Orange Revolution.

The corruption and malpractice charges in voting alleged by the protestors were upheld by the Supreme Court and the court annulled the election results. Viktor Yushchenko was declared the winner following the re-election. His campaign colour theme was orange, hence the name.

In 2014, the country grabbed attention for the Euromaidan movement or the Revolution of dignity. The civil unrests were based on goals including the removal of then-President Viktor Yanukovych and restoration of 2004 constitutional amendments.

Crimea is a peninsula on the Northern coast of the Black Sea in Eastern Europe. The population includes mostly ethnic Russians but has Ukrainians and Crimeans as well.

In the 18th century, Crimea was annexed by the Russian empire. Following the Russian Revolution, Crimea became an autonomous region in the Soviet Union.

In 1954, Soviet leader Nikita Khrushchev, a Ukrainian by birth, transferred Crimea to Ukraine.  But the status of Crimea remained disputed since then.

In February 2014, post-Ukrainian Revolution, Russian troops were deployed in Crimea. A referendum on reunification with Russia was held in March in which 90% population favoured joining Russia. Despite opposition from Ukraine, Russia formally annexed Crimea in March 2014.

Read here for in-depth details of the Euromaidan, Ukrainian revolution, and Crimean annexation.

The Minsk agreements between Russia-Ukraine

Following the 2014 Ukraine revolution and the Euromaidan movement, civil unrest erupted in the Donetsk and Luhansk regions (together called the Donbas region) in Eastern Ukraine which borders Russia.

The majority population in these regions are Russians and it has been alleged that Russia fuelled anti-government campaigns there. Russia-backed insurgents and the Ukrainian military engaged in armed confrontations in the region.

In September 2014, talks led to the signing of the Minsk protocol (Minsk I) by the Trilateral Contact Group involving Ukraine, Russia, and the Organisation for the Security and Cooperation in Europe (OSCE). It is a 12 point ceasefire deal involving provisions like weapon removal, prisoner exchanges, humanitarian aid, etc. But the deal broke following violations by both sides.

In 2015, yet another protocol termed Minsk II was signed by the parties. It included provisions to delegate more power to the rebel-controlled regions. But the clauses remain un-implemented due to differences between Ukraine and Russia.

Organization for Security and Co-operation in Europe (OSCE)

The Organization for Security and Co-operation in Europe (OSCE) is the world’s largest security-oriented intergovernmental organization with observer status at the United Nations. It is based in Vienna, Austria. It has 57 members spanning across Europe, Asia, and North America. India is not a member. Decisions are made by consensus.

Its mandate includes issues such as arms control, promotion of human rights, freedom of the press, and fair elections. It has its origins in the mid-1975 Conference on Security and Co-operation in Europe (CSCE) held in Helsinki, Finland. In 1994, CSCE was renamed the OSCE. It was created during the Cold War era as an East-West forum.

The latest episode of the Russian troop display near the Ukraine border is linked to all the previous issues. Not just Russia, but the United States and the European Union have stakes in Ukraine.

While Russia shares centuries-old cultural ties with Ukraine, the US and the European Union see Ukraine as a buffer between Russia and the West.

Russia seeks assurance from the West that Ukraine would not be made part of NATO which has anti-Russian ambitions. But the US is not ready to budge on Russia’s demands.

The sudden rise in tensions can be attributed to the following factors:

India has long maintained a cautious silence on the Russia-Ukraine conflict issue. But recently India has spoken in the matter and called for peaceful resolution of the issue through sustained diplomatic efforts for long-time peace and stability.

New Delhi and Moscow have a time-tested and reliable relationship especially with Russia being a major arms supplier to India.

India has risked US sanctions under Countering America’s Adversaries Through Sanctions Act (CAATSA) by the buying S-400 missile defence system from Russia.

On the other hand, India also needs the support of the US and EU in balancing its strategic calculus.

It is also worthwhile to note that India had abstained from voting in a United Nations resolution upholding Ukraine’s territorial integrity following Russia’s Crimean annexation in 2014.

Even this time, India is maintaining a patient approach by hoping that the situation will be handled peacefully by skilful negotiators.

The Russia-Ukraine conflict is threatening the delicate balance the world is in right now and escalation can have manifold impacts on a global scale.  There is a strong case for de-escalation, as a peaceful culmination of severed relations is for the good of everyone in the region and the world over.

The US can play a central role in the management of the Russia- Ukraine conflict with support from the other European allies like the UK, Germany, and France.

Negotiations and strategic investments should be aimed at creating sustainable resolution of the conflict.

It will not be enough to just smooth over the difficulties, but major attention to be given to structure the military disengagement to minimize the chances of backsliding.