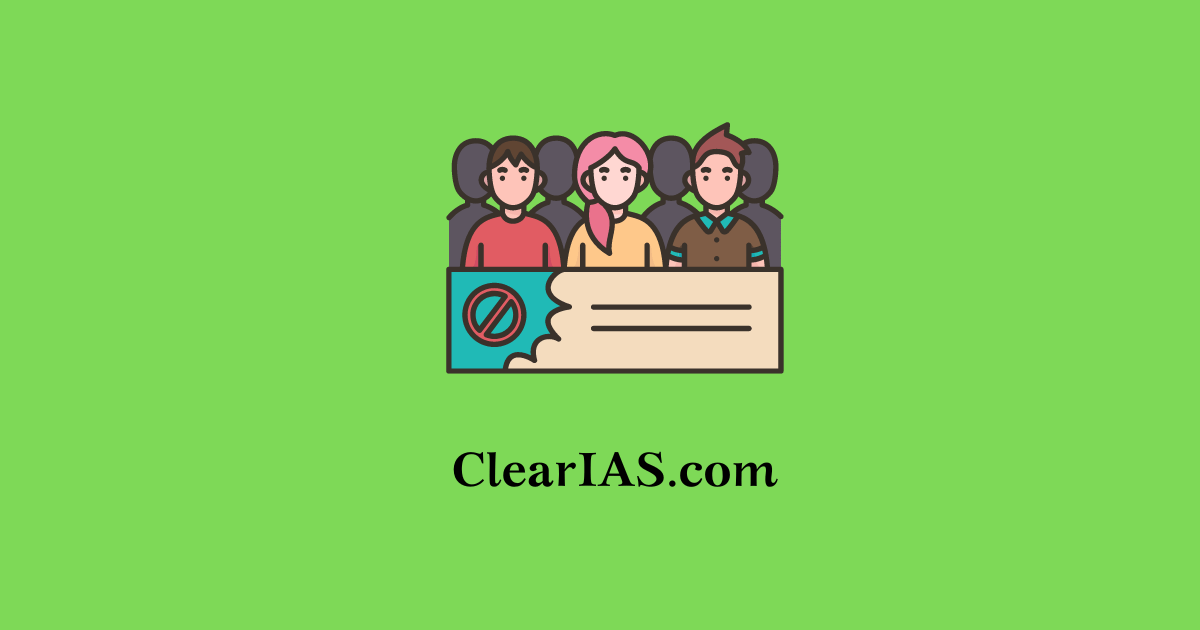 What is meant by Mob Lynching? What are the causes and issues of Mob Lynching? Are there any government initiatives in this regard? To answer these questions, read further.

Mob lynching refers to killing someone for an alleged offense without a legal trial. It is a form of aggression in which a mob, under the guise of administering justice without a trial, punishes and tortures a presumed offender, sometimes resulting in mass killings.

The mob believes they are punishing the victim for doing something wrong and they take the law into their own hands to punish the alleged accused without following any rules of law.

The recent lynching occurrences recorded in Amritsar and Kapurthala concerned the former chief minister of Punjab. It has again highlighted the issue of mob lynching still persisting in the country.

Little awareness among the masses and the low penetration of education pave the way for the easy spread of fake news, resulting in mass destruction and unrest. There is a lack of trust and deep fissures prevailing in society.

The high rate of unemployment existing among the youth leaves millions of youth unengaged and these young idle brains are often misguided and brainwashed through various ideologies and propaganda.

There is poor law enforcement. Additionally, there is an insufficient implementation of minority laws to protect the weaker groups, and law enforcement organizations fail to uphold the public’s trust.

There is no specific data concerning lynching, the mob has no face which leads the mob to take extreme steps, and this results in a lack of accountability and conviction.

Police officers play an essential part in protecting people’s lives and maintaining social harmony, but because of their ineffective investigation procedures, hate crime is on the rise.

Mob lynching is a hate crime that is on the rise as a result of biases or prejudices among various castes, groups, and religions. Biases are based on many identities such as caste, class, and religion.

It is against the concept of diversity and fraternity and leads to an atmosphere of lack of trust among the people, especially the marginalized and the vulnerable. As a result, there is a loss of peace, harmony, and an atmosphere of fear. It can also destabilize communal harmony. For example cow vigilantism.

It can also hurt tourism as foreigners will now fear visiting India because of the prevailing fear of mob lynching and loss of peace.

Mob lynching is against the rule of law. It shows the prevailing eroded faith of the public in the judicial system and the legal procedures of the country. It is quite difficult to hold anyone accountable.

Mob lynching violates human dignity, Article 21 of the Constitution, and is a flagrant violation of the Universal Declaration of Human Rights. Such incidents violate Articles 14 and 15 of the Indian Constitution, which guarantees equality and prohibit discrimination.

However, it is nowhere mentioned in the law and is thus simply referred to as murder because it has not yet been incorporated into the Indian Penal Code.

The Supreme Court in the Tehseen Poonawalla vs Union of India case issued directions on the preventive, punitive, and remedial measures to be adopted by the central and state governments.

In Telangana the police officers engaged with the masses to spread awareness and also keep a vigil on the spread of fake news through Whatsapp, similar initiative was taken by the West Bengal police which took the help of Twitter to dispel the rumors.

States were ordered to establish designated fast-track courts in each district to deal solely with cases involving mob lynching. The court had also proposed forming a special task force to gather intelligence on those involved in spreading hate speeches, provocative statements, and fake news that could lead to Mob Lynching.

The directions given by the Supreme Court need to be strictly followed. There is a need for coherent law to tackle the menace of mob lynching and the recommendations of the Rajiv Gauba Committee need to be taken into account.

The committee urged that social media sites including Facebook, WhatsApp, YouTube, and Twitter ought to take action against fraudulent content in a “time-bound” way, hold social media companies liable for failing to remove harmful posts and videos after becoming notified of them, top representatives of these sites may face legal action if they disobeyed government directives by filing a formal complaint.

There is an urgent need for social and attitudinal change among the masses by increasing the level of education and awareness and the spirit of communal harmony. The use of civil societies and NGOs to create awareness and social media literacy can be a good option.

The role of technology can prove to be a boon regarding mob lynching and trying to aware people regarding it. We can hold social media platforms accountable and identify the tracking to curb the spread of rumors. For example, the Delhi government initiative to verify WhatsApp forwards.

In the shorter run, the data and trends regarding mob lynching need to be properly recorded and monitored, and further analyzed to find the solution, and in the longer run, police reforms and the criminal justice system reforms can prove to be beneficial.

There is a need to strengthen the law and order, administration, and governance to instill public faith in law and order, punish wrongdoers, and set the right example.

Lynching is a heinous crime that has no place in a democratic society. Every time there is an honor killing, hate crime, witch hunt, or mob lynching, we demand special legislation to address these crimes. However, the existing provisions under the IPC and CrPC are inadequate to deal with such crimes.

We are adequately prepared to deal with mob lynching if the guidelines established in Poonawala’s case are followed. Several preventive, corrective, and punitive strategies to cope with lynching and mob violence were outlined in Poonawala v. UOI. However, we lack proper enforcement of existing laws and accountability of enforcement agencies.