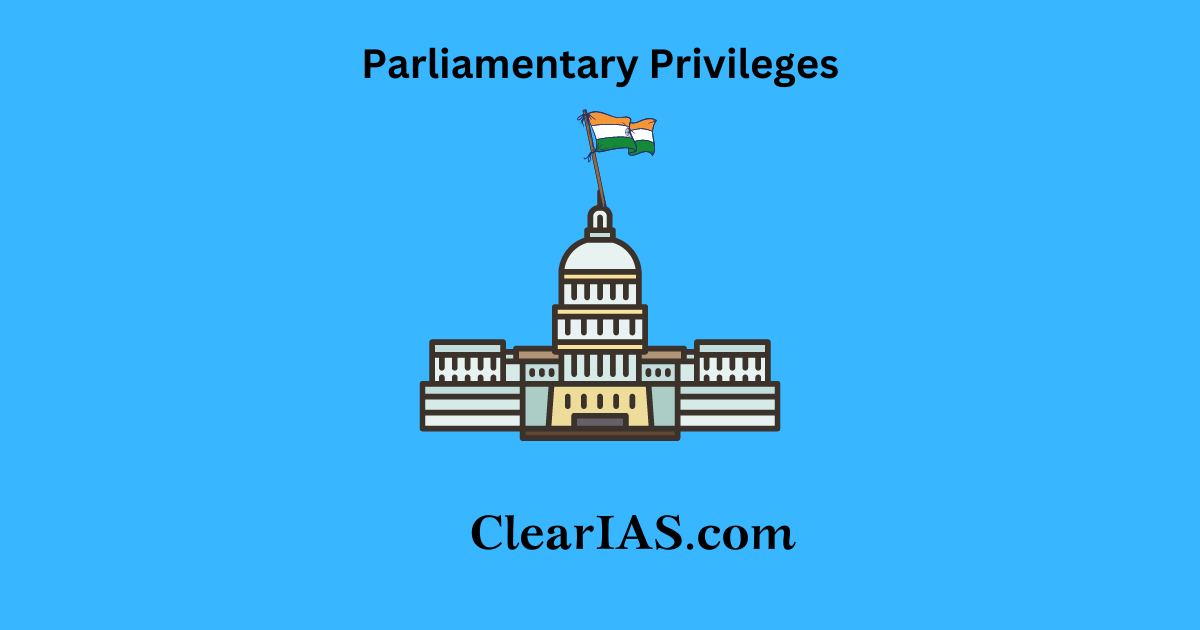 The chairman of the parliamentary committee on information technology, Shashi Tharoor, informed Lok Sabha Speaker Om Birla in a letter that during a CBI raid, Karti Chidambaram’s “extremely confidential” documents regarding the panel were “seized.” He claimed that this is a “breach” of the committee’s privilege as well as the privilege of the member. In a letter to Birla, Tharoor brought up a “severe breach of privilege” that committee member Karti Chidambaram had experienced. Tharoor was writing in his capacity as chairman of the Parliamentary Standing Committee on Information and Communications Technology.

Parliamentary privilege refers to rights, immunities, and exemptions enjoyed by MP individually and collectively to discharge their functions responsibly.

Source of the Privileges

Individual Privileges: These are the rights that each member of parliament has in his official capacity. For instance, MPs are free to speak their minds in the House, cannot be detained in civil proceedings 40 days before or after the start of the current session of Parliament, and are not required to serve on juries.

During the session of the legislature, a member cannot be arrested. Additionally, members cannot be detained 40 days before or after the session’s beginning or end.

Parliamentarians have a right to free speech inside the chambers. They are not subject to any legal action as a result of their statements made in the parliament or its committees. However, it is controlled by the guidelines.

When Parliament is in session, they have the option to decline to provide testimony and appear as a witness in a case that is pending in court.

Collective Privileges: These are the collectively conferred privileges and are more generic in nature. For instance, the right to publish documents, reports, and discussions and to forbid others from doing the same.

Right to hold private meetings, the Right to be informed of members’ arrests and releases, and the authority to penalize for disrespect or violating a privilege.

There can be no judicial procedure served without notifying the presiding officer.

The Indian parliament has the right to keep outsiders out of its sessions.

The two houses have the authority to establish regulations for their working methods, business conduct, and work assessment.

In the event of a privilege violation, the parliament may suspend or expel members.

If a member or outsider violates a privilege, the parliament may punish them.

The court cannot examine into the activities of the houses and committees of the parliament.

Significance of the Parliamentary Privileges

The SC ruled that some fundamental rights are subsidiary to legislative privilege while others take precedence over it. Consequently, SC has not been very explicit on this matter.

A privilege motion is initially examined by the Speaker/Rajya Sabha chairperson.

The privilege motion may be decided on by the Speaker/Chair or referred to the Parliamentary privileges committee.

The member in question is given the chance to make a brief statement if the Speaker/Chair grants permission in accordance with applicable rules.

There are allegations against the Speaker of being biased towards the ruling party while deciding on breach of Parliamentary Privileges.

It hurts the Principle of Popular sovereignty as in India the Constitution is supreme, not Parliament. Hence, absolute power in the form of Parliamentary privileges makes Parliament supreme instead of the people

Legislators believe that codifying privileges will undermine Parliament’s ability to exercise its authority. Basically, our legislators oppose codification because it would subject the privileges to court review.

Should not be codified

It would put the Indian Parliament’s sovereignty in jeopardy and subject privileges to judicial review, especially when they contradict fundamental rights. It can cause delays.

The members should be free to carry out their duties, including having the ability to speak and vote in Parliament, without having to fear or favor anyone.

A statute to codify privileges was tacitly allowed by the Constitution. If defined, it would specify what constitutes and amounts to a violation of privileges, eliminating any ambiguity. Codification would establish the precise threshold beyond which no penalty may be meted out for privilege violations.

Codification will permit clear interpretation in a vigorous democracy like India, where the constitution, not the Parliament, is sovereign. Australia, for instance, has established legislative privileges.

It is necessary to codify privileges and give the right of a citizen to free expression precedence above legislative privileges. Legislators should also behave within the bounds of the public trust placed in them to carry out their duties.

The members are granted parliamentary privileges in order to ensure that the parliament runs smoothly. The parliament has an obligation to respect all constitutionally given rights. The members should proceed cautiously when using their privileges and refrain from exploiting them.