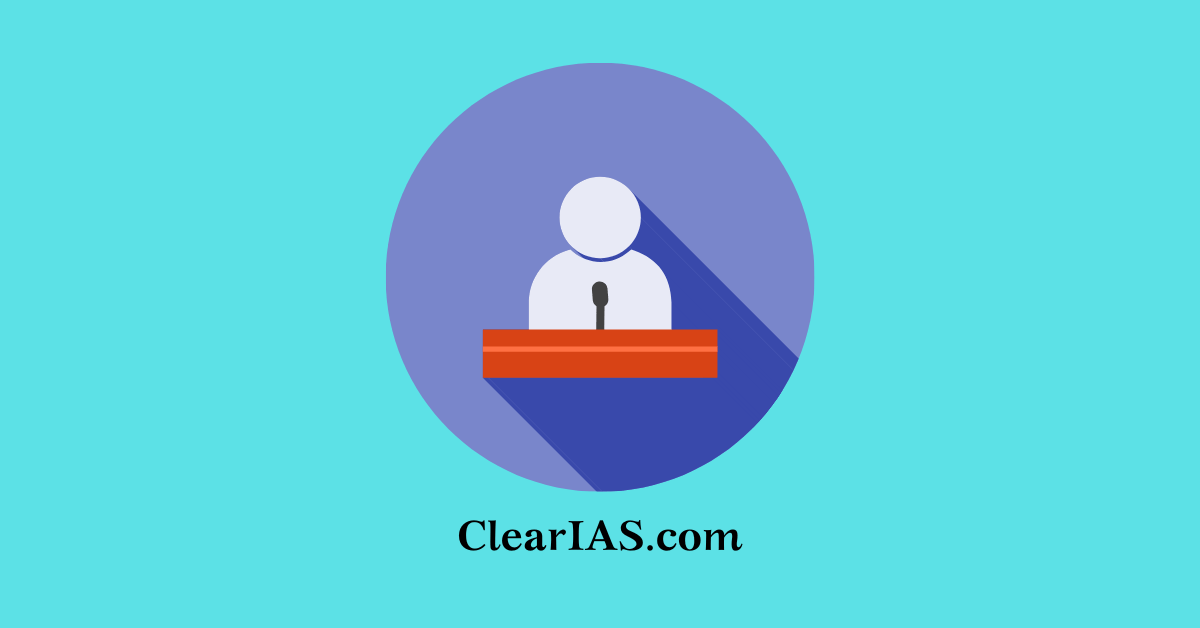 In India, the Lok Sabha speaker is the highest authority in the lower house of the Parliament. Read to know more about the constitutional provisions of the speaker of Lok Sabha.

Lok Sabha is the lower house of the Parliament of India.

The speaker of the Lok Sabha is the presiding officer of Lok Sabha.

The Lok Sabha speaker is the highest authority in the House of People (Lok Sabha).

According to the Indian Constitution, the Speaker must be a Member of the house.

There are no precise qualifications set down for being elected as the Speaker.

However, an understanding of the Constitution and the laws of the nation is regarded as a major value for the holder of the Office of the Speaker.

Typically, a member of the party in power is chosen as Speaker.

After informal discussions with the leaders of other parties and groupings in the House, the ruling party nominates its candidate in a procedure that has developed over the years.

Tenure of the Speaker of Lok Sabha

The Speaker’s term in office lasts for five years, from the day of his or her election to the day before the first Lok Sabha meeting. Once elected, the speaker is up for reelection.

Throughout the life of the Lok Sabha, the Speaker remains in position.

He might, however, have to leave the office early, if he resigns in writing to the Deputy Speaker, ceases to be a member of the Lok Sabha, or is dismissed by a motion approved by a majority of all Lok Sabha members.

The Speaker may attend the meeting but shall not preside when the House is considering a resolution to remove the Speaker.

Article 93 of the Constitution provides for the election of the Speaker, which heads the lower house of the parliament.

The terms “Speaker” and “Deputy Speaker,” respectively, were introduced by the Government of India Act of 1935.

Provisions for the independence of the Speaker

Importance of the role of the Lok Sabha Speaker

The Speaker of Lok Sabha will be in charge if there is a joint session with Rajya Sabha.

The Speaker of Loksabha is the only one who can decide if a bill is a money bill.

He selects the leaders of all the Lok Sabha’s parliamentary committees, oversees their work, and assures the effectiveness of the committees.

Speakers like Shivraj Patil, for instance, were instrumental in starting 17 departmental standing committees.

The speaker has the authority to decide whether to disqualify legislators for defection in violation of the anti-defection law, according to the 10th schedule of the Indian Constitution.

A Speaker can cast a vote to break a tie.

The speaker serves as the last word on how the Rules of Procedure should be interpreted. House affairs are performed under clear, well-established rules of procedure.

The speaker defends the privileges and rights of Lok Sabha members. For instance, no one can be detained inside the Lok Sabha without his/her permission.

In the absence of a quorum, the speaker has the authority to adjourn the House or postpone a session.

The Speaker sets the agenda for House meetings after consulting with the business committee and the Prime Minister. The Speaker chooses the format and style in which the House’s proceedings are published.

To ask questions of the ministers, the Speaker’s approval is required.

The speaker may avoid inquiries that are politically motivated or superfluous while ensuring that the important questions are discussed.

The Speaker’s consent is required to introduce the bills, reports, motions, and resolutions.

The Speaker also serves as the head of the Lok Sabha Secretariat and has authority over the Secretariat employees of the House.

The Speaker is the channel via which the decisions of the House are conveyed to parties and organizations outside of Parliament.

The speaker leads the inter-parliamentary group and serves as a liaison between the Indian Parliament and other parliaments around the world.

He serves as the conference’s chairperson of India’s legislative bodies’ presiding officers.

Who is the present speaker of Lok Sabha?

Is there a speaker post with respect to Rajya Sabha?

The Vice president of India is the Chairman of the Rajya Sabha.

Speaker of a State Legislative Assembly

India is a federal country.

There are a lot of similarities between the roles and responsibilities of the Speaker of Lok Sabha and Speaker of a Legislative Assembly.

Issues with the post of Speaker of Lok Sabha

The Speaker is elected to the House on the ticket of a political party, putting his or her impartiality in jeopardy. Politically, the speaker is more likely to support his own party.

Rules of the Lok Sabha may be interpreted by the Speaker, which occasionally results in partisan behaviour in favour of the ruling party.

The speaker’s judgment is final in regard to Money Bill declarations and cannot be challenged in court.

The speaker’s decision to exclude MLAs from voting under the anti-defection law has drawn criticism in the past. It has also been contested in court.

The constitution does not provide a time restriction on how long decisions may take.

The discretionary authority to identify any law as a money bill has been abused in several situations. For instance, there was a backlash when the Aadhar bill was tabled as a Money Bill in the Lok Sabha.

The electoral system and conventions in India have not been developed to ensure the protection of the office. There may be personal reasons for Speakers to retain party membership.

Elections to the post of Lok Sabha speaker are not always by consensus. There have been cases when different parties have fielded their candidates.

It is crucial that we start comprehensively reforming the Parliamentary structure, appropriately starting with the post of Speaker, to guarantee that India improves its ranking in the Democracy Index.

The Speaker should speak for the entire House as envisaged in the Indian Constitution.

The nation is represented by House. As a result, the Speaker represents the freedom and liberty of the country. Therefore, he or she should be a person of exceptional talent and objectivity.

To ensure impartial decisions from the Lok Sabha speaker, Parliament can also explore amending the Constitution for a better mechanism.

One suggestion is to replace the Speaker of the Lok Sabha and Legislative Assemblies with a “permanent tribunal led by a retired Supreme Court judge or a retired Chief Justice of a High Court.”

The article written: by Chetna Yadav