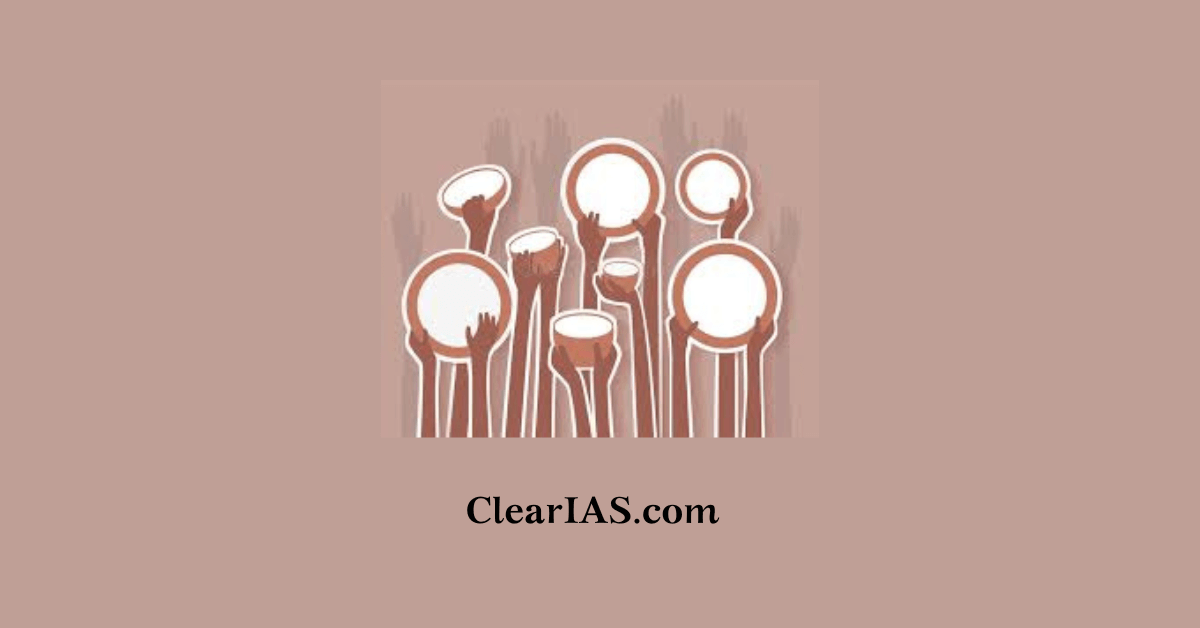 Persistent and unchecked poverty is one of the ironies of the technologically progressing world. Why does poverty still exist? What are the types of poverty existing in the world? How is poverty estimated in India? What are the measures to tackle it? Read on to know more.

Poverty is a complex phenomenon in which an individual or group lacks the means of subsistence and other basic necessities.

The World Bank defines poverty as a severe lack of well-being that has several dimensions.

Low salaries and the inability to obtain the fundamental goods and services required for humane survival are examples of this. Low levels of health and education, poor access to sanitary facilities, insufficient physical security, lack of voice, and lack of resources are all included in the definition of poverty.

Poverty can be categorised in the following ways based on social, economic, and political factors:

It describes a state in which a person consistently falls short of earning enough money to cover at least one or more essential expenses for a long time. It can be calculated in terms of money, calories, or nutritional attainment.

For example, Families that are unable to feed their children and themselves, as well as homeless persons living on the streets, are examples of absolute poverty.

It happens when people do not have the minimal level of living standards that are set by the government and are enjoyed by the majority of the population and vary from country to country. It is thought to be on the rise and may never completely disappear.

For example, A person living in a wealthy culture may have a regular income and all of the essentials of life, but because they do not have as many luxuries as other members of the community, relative poverty is defined in the UK as income that is 50% below average salaries.

It is a form of temporary poverty predicated by the occurrence of a negative event like an environmental catastrophe, a job loss, or a serious health issue.

People are capable of helping themselves even with modest assistance because poverty is the result of unfavourable circumstances.

It is passed down from one generation to the next to individuals and families.

This is more challenging because there is no way out because everyone is caught up in the root of the problem and lacks access to the necessary resources.

This happens in rural locations where there are fewer job prospects, services to access, support for people with impairments, and opportunities for a good education.

Most of the locals depend on farming and other clerical labour that is available in the area to make a living.

The main difficulties urban residents confront as a result of poverty include:

Due to congestion, the environment is violent and unpleasant a weak or nonexistent social safety net.

The oldest calculation of the poverty line was done by Dadabhai Naoroji in his book “Poverty and unBritish Rule in India.”

This estimate was made based on the price of subsistence or minimally adequate food.

This committee, which was established under the leadership of Jawaharlal Nehru, proposed a poverty line based on a minimal quality of living, ranging from $15 to $20 per person per month.

Supporters of the Bombay Plan1 proposed a poverty limit of $75 per person per year, which was far lower than the National Planning Committee’s estimate.

The accurate measurement of poverty based on starvation was decided.

The following recommendations were made by an expert group, led by D.T. Lakdawala, which was formed to assess the technique for estimating poverty:
As in the past, calorie consumption should serve as the basis for calculating consumption expenditure;

The stoppage of “scaling” poverty statistics based on National Accounts Statistics

The recommendations made by this committee serve as the foundation for the current poverty estimates.

This committee suggested abandoning the calorie-based approach and broadening the definition of poverty by taking into account monthly expenditures on power, transportation, health care, and education.

It advocated for nutrient intake as opposed to calorie intake. A line based on the cost of living was also drawn by the committee. In rural and urban areas, the Tendulkar panel set a baseline daily per capita spending of Rs. 27 and Rs. 33, respectively.

The committee increased the cost of living per day for rural and urban areas, respectively, to Rs. 32 and Rs. 47. As a result, India’s poverty rate was close to 30% and its total population was near to 40 crores.

A committee to identify people “Below Poverty Line (BPL)” was suggested by the task group.    The study discusses four methods for tracking the impoverished, starting with maintaining the Tendulkar poverty line.

Next, move to the Rangarajan or other higher rural and urban poverty levels.

Third, follow-up data on the bottom 30% of the population over time

NITI Aayog has emphasised that the poverty level will only be used to assess progress in addressing poverty rather than identifying the poor for entitlements in order to allay concerns that many poor people would be left behind if the Tendulkar Committee’s poverty line is adopted.

A Multidimensional Poverty Index Coordination Committee (MPICC) has been established by NITI Aayog with representatives from pertinent Line Ministries and Departments.

The competition between states is intended to compel states to adopt drastic measures to reduce poverty.

The UNDP’s Multidimensional Poverty Index is also anticipated to be influenced by the findings (MPI).

Why does poverty still exist?

The heavy pressure on the population

The excessive subdivision and holdings fragmentation that results from rapid population increase. As a result, there is significantly less land available per person, and households lack access to enough land to meet their needs for productivity and revenue.

Since 1951, India’s population has been expanding quickly, which has resulted in a slower increase in per capita income and decreased living standards for the populace.

In India, there is persistent unemployment and underemployment as a result of the country’s ongoing population growth.

The lack of adequate economic growth in India is the primary factor contributing to the country’s widespread poverty.

Since India gained independence, the national income and savings rate has increased, but poverty has not decreased as much as it could have because industrial expansion has not produced enough job possibilities.

Growth strategies benefited the wealthy more than they did the poor.

Fair access to land is a crucial component of the fight against poverty.

The majority of rural poor people work as agricultural labourers (who typically lack land) and are independent small farmers with less than 2 acres of land.

Additionally, they are unable to find work all year long. As a result, they work too little and are unemployed for a lot of days each year.

The cost of the minimal consumer expenditure necessary to meet basic necessities increases due to inflation, notably given the increase in food costs. As a result, many households are forced below the poverty line by inflation.

Shortage of Capital and Able Entrepreneurship

The ability to start your own business and have money both play a big part in driving growth. However, compared to other developing countries, these are scarce, making a large rise in output difficult.

The social structure is still outdated and does not encourage rapid development.

India’s hot climate makes it harder for individuals, particularly rural residents, to work, which has a negative impact on productivity.

Moreover, the agricultural production of the nation is adversely impacted by the lack of timely rain, heavy rain, or insufficient rain.

The process of granting concessions and eradicating poverty is disrupted by ethnic issues and conflict between two regional parties.
The main reason for concern about India’s poverty is that various development programmes are being driven by political interests. As a result, efforts to address the issues of unemployment and poverty have been ineffective.

Actions to address issues of Poverty

Any programme cannot be implemented successfully without the poor’s engaged participation.

Only until the impoverished begin actively participating in the growth process and contributing to growth can poverty be truly erased.

This is made feasible by a social mobilisation approach that empowers the underprivileged by promoting their participation.

While attempts should be made to hasten economic growth, it is best to avoid importing capital-intensive technologies from Western nations.

Instead, we should pursue a path of economic growth that requires lots of labour.

Adopting monetary and fiscal measures that encourage the use of labour-intensive methods is necessary.

The growth of non-farm employment in rural areas is particularly important for reducing poverty.

Reduce rural poverty through redistributing land through practical means, such as the implementation of tenancy reforms to provide security of tenure and the determination of reasonable rent.

The conditions enabling small farmers to acquire access to productive resources, such as HYV seeds fertilisers, and installation of minor irrigation, such as wells and tube wells, can be created through the availability of loans to the poor on easy terms.

Small farmers will be able to employ high-yielding technologies as a result, increasing their productivity.

Interest-free loans are provided to SHGs and Community Based Organizations (CBOs) to purchase public transportation vehicles so they can make money transporting passengers.

The major goal of all of our development programmes had been to encourage quick, balanced economic growth that was both equitable and socially just.
However, not all groups of individuals have benefited from our policies and actions. The constitution’s promise and our ancestors’ hopes for an equitable society have not been realised.
It’s time to consider unconventional approaches to ending poverty because while some regions and certain economic sectors have reached a level of social and economic growth that allows them to compete with industrialised nations, many others have been unable to escape the cycle of poverty.