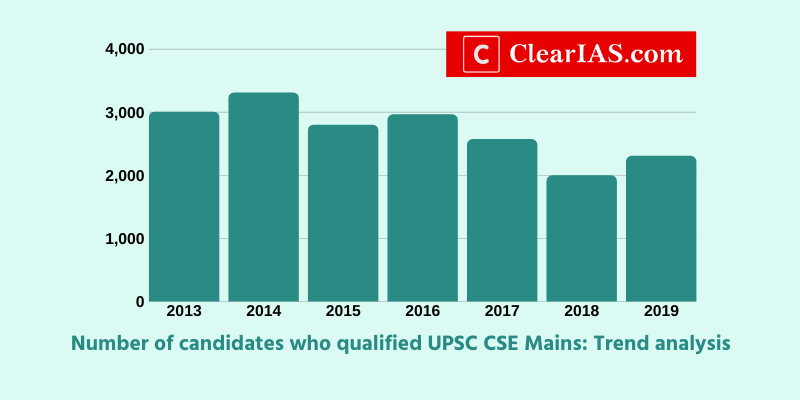 2304 Candidates are qualified for the Personality Test (Interview) to be conducted at the UPSC building in New Delhi.

Update: The names of successful candidates are now available.

Once qualified for UPSC interview, even if not selected for Civil Services, doors to many government and public sector jobs like that of NTPC, SAI etc opens up for the candidates.

The number of candidates to be admitted to the Main Examination will be about twelve to thirteen times the approximate number of total vacancies to be filled in the year through the UPSC Civil Services Examination.

However, in most of the previous years, the number of candidates who are summoned for the interview is around 2.5 times the number of vacancies.

In 2019, the vacancies reported at the time of Civil Services Examination notification is 896. However, as in most other years, the number of final vacancies may be higher. In this trend analysis, for all years except 2019, we have mentioned the reported vacancies at the time of final rank-list.

Marks thus obtained by the candidates in the Main Examination (written part as well as interview) would determine their final ranking.