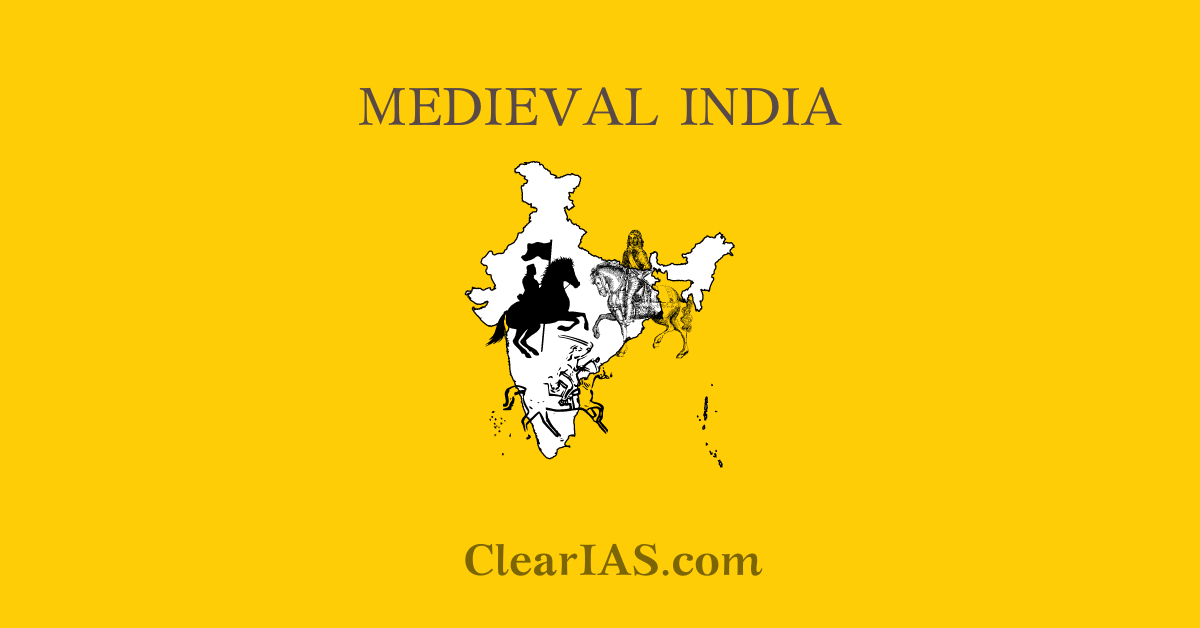 Post Tughlaq dynasty’s end, many regional kingdoms rose in medieval India. Read here to learn about the important kingdoms of the period.

The most important of them were:

The nobles in the doab region were de facto independent and the Sharqis became the overlords.

In 1394 Malik Sharawar who was a wazir under the Tughlaq sultans became the first Sharqi sultan.

He was made Lord of the east-Malik-us-Sharq and his successors came to be known as Sharqi Sultans.

Their capital was at Jaunpur, UP also known as ‘Shiraz of the East’ as it became the center of learning and culture.

Their rule spanned from Aligarh to Darbhanga, and Nepal to Bundelkhand.

In 1479 the Jaunpur sultanate was reabsorbed into Delhi Sultanate by Bahlol Lodi.

The Kashmir region developed into a significant Hindu and later Buddhist center under the Maurya and Kushana dynasties.

A native Shaivism tradition emerged later in the ninth century, under the Karkota Dynasty.

Seven centuries of Hindu dominance, which continued under the Utpala and Lohara kings, ended in the middle of the fourteenth century.

Islam spread in Kashmir in the 13th century, when Shah Mir became the first Muslim ruler of Kashmir in 1339.

Sultan Sikandar Shah ruled Kashmir from 1389 to 1413. He persecuted many Hindus and brahmins and promoted forced religious conversions.

With the death of the Sultan in 1470 CE, the Shah Mir dynasty also started to decline due to its weak rulers. The last ruler of this dynasty was Habib Shah (1555 CE) who was dethroned by his commander Ghazi Chak who then founded the Chak dynasty.

Muhammad Ghazi Shah Chak established the dynasty in 1555 CE. The Chaks were originally from the Gilgit Hunza region’s Dard region.

The Chak kings thwarted Mughal attempts to capture Kashmir by Babur and Humayun.

Yusuf Shah Chak (about 1579–1586 CE) assumed the throne as the monarch of Kashmir. He was brought to meet with Akbar for discussions but was imprisoned there and died.

His son Yaqub Shah Chak succeeded him as Kashmir’s king after his death. He attempted to oppose the Mughal Army, but Qasim Khan, the army’s commander, was able to overcome him. As a result, Akbar conquered the kingdom of Kashmir (about 1586 CE).

In 1342 CE, Haji Ilyas Khan, a noble became the ruler of Bengal and laid the foundation of the Ilyas Shah dynasty.

After Azam Shah died in 1409, the Ilyas Shahi briefly fell weak and a Hindu zamindar under the Ilvas Shahis, Raja Ganesh usurped the throne at Pandua and married Azam Shah’s widow.

A brief spell of Hindu rule was seen in Bengal under Raja Ganesh (1414 to 1415), but his sons adopted Islam and ruled as Muslims.

According to Chinese and Burmese accounts, Bengal was invaded by Ibrahim Shah Sharqi Jaunpur-sultan), but was defeated by Raja Ganesh.

Later, the kingdom was taken over by the Hussain Shahi dynasty which ruled for 44 years.

The Ahom kingdom was established by Sukaphaa, a Tai prince from Mong Mao (present-day Yunnan province, China) in the 13th century. The kingdom was converted to Hinduism over the centuries, and it became a multi-ethnic culture.

They ruled for about 600 years and no attack on them was successful during this period, hence they largely remained independent.

Vaishnavite reformer Sankardev (born in Nagaon district, Assam) lived during this time (1449-1568). He played an important role in the spread of Vaishnavism in Assam. He and his followers established Sattras (monasteries), where the Sattriya dance form originated.

The regional kingdom of Odisha

During medieval times, the Hindu Gajapati rulers (1435 – 1541 CE) ruled over Kalinga (Odisha), large parts of Andhra Pradesh and West Bengal, and the eastern and central parts of Madhya Pradesh and Jharkhand.

Kapilendra Deva founded the Gajapati dynasty in 1453 CE after the decline of the eastern Ganga dynasty.

They spread their control over Karnataka in the south, which put them at odds with Vijayanagara, the Reddis, and the Bahmani sultans.

However, by the early 16th century, Vijaynagara and Golconda had gained control of substantial areas of the southern empire, and the Gajapati dynasty had even given way to the Bhoi dynasty.

Gujarat was one of the richest provinces of the Delhi Sultanate as it was rich in soil, and handicrafts, and had sea ports for trade.

During Firuz Tughlaq’s reign, Zafar Khan was governor of Gujarat.

In 1407, Zafar Khan formally proclaimed the independent Gujarat Sultanate and took up the title Muzaffar Shah, as the official independent ruler of Gujarat. He ruled from Patan as capital.

1392 Dilawar Khan Ghori who belonged to the court of Firoz Shah Tughlaq threw off his allegiance to Delhi and became independent.

Malwa sultanate was centered around Rivers Narmada and Tapi and as a buffer between Gujarat, Bahmanis, and Lodi Sultans of Delhi.

During the period 1531-1537 CE, Bahadur Shah controlled the kingdom, though the Mughal emperor Humayun captured it for a brief period in 1535- 36 CE.

In 1537 CE, Qadir Shah who belonged to the previous Khalji dynasty regained control over a part of the erstwhile kingdom.

With the conquest of Ranthambore by Alauddin Khalji, the power of Chauhans in Rajputana came to an end in the 14th century.

Mahmud II, the king of Malwa, sought assistance from Bahadur Shah of Gujarat as well as sultan Ibrahim Lodhi of Delhi because he was concerned about the influence of his rival Rajput wazir Medini Rai.

In 1518, Battle of Khatoli, Rana Sangha defeated Ibrahim Lodi when he invaded Mewar.

In1527 CE, Rana fought against Babur in the famous Battle of Khanwa (near Fatehpur Sikri).

In 1528 CE, he again fought Babur at the Battle of Chanderi to help Medini Rai who was attacked by Babur. But he fell sick and died in the camp.

Hence, these regional kingdoms ruled during the medieval time and eventually culminated in blending into a Mughal rule which followed Babur’s arrival.