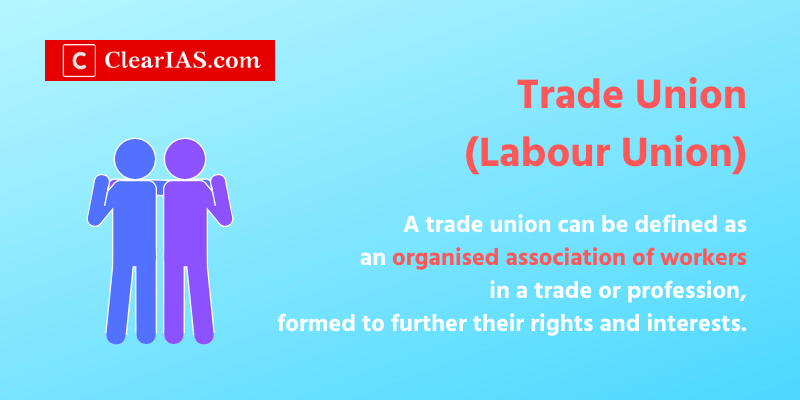 What are trade unions or labour unions? What are the new reforms introduced in the labour domain?

In a globalised world, it is equally important to protect the interests of workers along with that of industrialists.

At a time when the Government of India is trying to bring many labour reforms, it is important to know the history of labour unions, popularly known as trade unions.

What are labour unions or trade unions?

A trade union can be defined as an organised association of workers in a trade or profession, formed to further their rights and interests. In India, Trade Unions in India are registered under the Trade Union Act (1926).

Trade unions are interested in the economic and social welfare of the workers. Labour unions may also have political interests in the larger society.

Growth of Trade union movement in India was an organic process. It started towards the tail end of the nineteenth century and continues to date. It closely follows the development of Industry in India.

In India, now there are more than 16,000 trade unions with a collective membership of around 1 crore (10 million) labourers.

The growth of labour unions in India can be roughly classified into six phases.

Pre-1918: The genesis of the labour movement in India

After the setting up of textile and jute mills coupled with the laying of railways in the 1850s, worker atrocities started to come to light.

Though the origin of labour movements was traced to the 1860s, first labour agitation in the history of India occurred in Bombay, 1875. It was organised under the leadership of S.S Bengalee. It concentrated on the plight of workers, especially women and children. This led to the appointment of the first Factory commission, 1875. Consequently, the first factories act was passed in 1881.

Following this, different organisations were established across India.

Features of the labour movements in this era:

This period marked the birth of true trade union movement in India. It was organised along the lines of unions in the industrialised world.

The deteriorated living conditions caused by the first world war and the exposure with the outside world resulted in heightened class consciousness amongst the workers. This provided fertile ground to the development of the movement. This period is known as the early trade union period.

AITUC, the oldest trade union federation in India was set up in 1920. It was founded by Lala Lajpat Rai, Joseph Baptista, N.M Joshi and Diwan Chaman Lall. Lajpat Rai was elected the first president of AITUC.

Factors that influenced the growth of the movement:

This era was marked by increasing militancy and a revolutionary approach. It also saw multiple split-ups in the movement. Leaders like N.M Joshi and V.V Giri was instrumental in moderating the movement and further integrating it with the nationalist mainstream.

AITUC split up multiple times paving way for the formation of organisations like National Trade Union Federation (NTUF) and All India Red Trade Union Congress (AIRTUC). However, the need for unity was felt and they all merged with the AITUC in the next phase.

The government was also receptive to the trade union movement. Legislations like the Trade Unions Act, 1926 and the Trade Disputes Act, 1929 gave a fillip to its growth. It bestowed many rights to the unions in return for certain obligations. This period was marked by the dominance of the left. Hence, it may be referred to as the period of left-wing trade unionism.

This phase was marked by greater unity between different unions. Indian National Congress was in power in most of the provinces by 1937. This led to more and more unions coming forward and getting involved with the nationalist movement. In 1935, AIRTUC merged with AITUC. Different legislations were passed by provincial governments that gave more power and recognition to the trade unions.

The approach of Congress ministries was that of promoting worker interests while protecting industrial peace. Reconciliation of labour with capital was seen as an aim, with ministries working towards securing wage rise and better living conditions. However, many ministries treated strikes as law and order issues. They used colonial machinery to suppress it. This led to considerable resentment from the unions.

The Second World War lowered standard of living for the workers further and this led to the strengthening of the movement. The question of war effort created a rift between the Communists and the Congress. This, coupled with other issues, led to further split in the movement. However, the movement as a whole got stronger due to the compounding issues. This included mass entrenchment post-war and the massive price rise that accompanied it.

Legislations like Industrial Employment Act, 1946 and Bombay Industrial Relations Act, 1946 contributed to strengthening the trade union movement. In general, the movements got more vocal and involved in the national movement.

It was marked by the proliferation of unions. INTUC was formed in May 1947 under the aegis of Sardar Vallabhbhai Patel. Since then, the AITUC has come to be dominated by the Communists. Hind Mazdoor Sabha was formed in 1948 under the banner of Praja Socialist Party. Later on, it came under the influence of Socialists. Bharatiya Mazdoor Sangh was founded in 1955 and is currently affiliated to the BJP.

Post-independence, trade unions became increasingly tied with party politics. Rise of regional parties has led to a proliferation in their numbers with each party opting to create its trade union. However, their influence has been somewhat reduced after the liberalisation post-1991. Issues like labour code reforms and minimum wage remains a political hot potato due to the opposition from the trade union leadership.

Post-independence, India has also witnessed different unions coming together to address a common issue. These include the crippling railway strike of 1974 and the Great Bombay textile strike, 1982. However, such strikes are seen to get less public support post-1991. There is also an increased focus on informal labour. This is due to the particularly vulnerable situation of unorganised labour. All major trade unions have registered an increase in their membership from the unorganised sector.

The Significance of Trade unions in a Capitalist Society

India’s decisive shift towards market-led growth post-1991 has raised a lot of questions about the role of labour unions. Often, they are seen as an impediment to industrialisation and investment. However, their role is indispensable in balancing workers’ interests with that of investors. They also keep a check on the sustainability of business practices, including ethics.

Hence, they play an important role in getting support for worker interests from the larger society. They also mobilise opinions in favour of labour. They are also instrumental in organising democratic protests and avoid movements getting overly militaristic. Democratic trade unionism is also a must in avoiding workers coming under the influence of radical and anti-national elements. This is particularly important in the environment of rising socio-economic inequality post liberalisation.

Ease of Doing Business vs Competitiveness of the labour market

The Government of India is focussed attract investments by making the nation business-friendly.

India had moved 14 places to be 63rd among 190 nations in the World Bank’s Ease of Doing Business Rank 2020. However, it failed to achieve the government’s target of being at 50th place.

The competitiveness of its labour market is a major area of worry where India is currently ranked 103 out of 141 countries by the World Economic Forum.

There are numerous labour laws in India – more than 40. As part of labour reform initiatives, the labour ministry has decided to amalgamate 44 labour laws into four labour codes — on wages, industrial relations, social security and safety, health and working conditions.

These are a slew of legislation aimed at reforming and simplifying the labour law regime in the country. According to the government, all major labour unions were consulted in the process.

The plan is to replace 44 labour laws that dealt with different issues with four comprehensive bills. With this, we will have just four simplified laws in place of these laws. 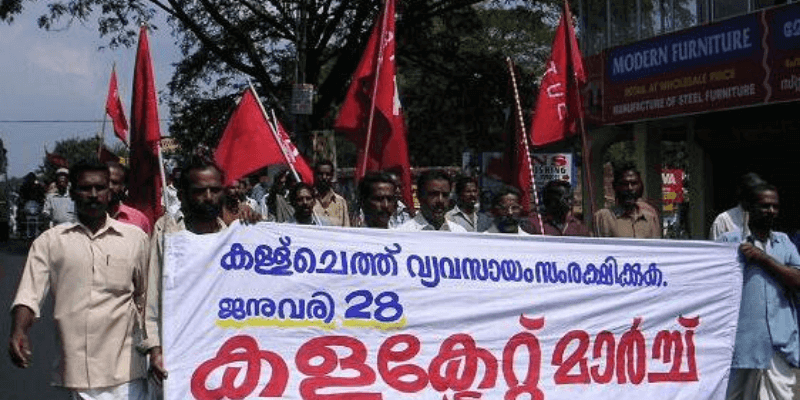 The new 4 codes will deal with wages, social security, industrial safety and welfare, and industrial relations.

Code on Industrial safety and welfare will replace legislations like the Factories Act, the Mines Act and the Dock Workers (Safety, Health and Welfare) Act. This will put in place a uniform regime across the nation to ensure industrial safety.

The Labour Code on Industrial Relations will combine the Trade Unions Act, 1926, the Industrial Employment (Standing Orders) Act, 1946, and the Industrial Disputes Act, 1947. The focus here is to set the stage for the way labour unions can protect labour interests. It also seeks to abolish deadlocks and promote worker welfare while promoting investment.

Note: The Labour Code on Wages was approved by Parliament in August while the Labour Code on Occupational Safety, Health and Working Conditions have been referred to the standing committee on labour.

A vibrant and responsible trade union environment is the requisite for inclusive growth to any economy. It checks growing inequality and falling living conditions of the working class.

Recent years has seen an erosion of powers of most labour unions. Though labour reforms are the need of the hour, every reform should strike a perfect balance between labour welfare and investment-led development.