UPSC has announced the results of 2014 Civil Services Mains results. Roll numbers of around 3300 candidates are included in the list. Personality Test of these candidates is likely to commence from 27th April, 2015. Here are the highlights of the official announcement from UPSC on Civil Services Mains 2014 Written Exam Results: 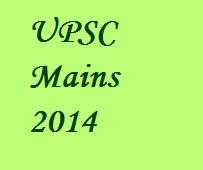 ClearIAS.com congratulates all candidates who made it to the final round. We thank all our readers who appreciated the 50-day Clear IAS Mains High Value Answer Writing Test Series and Mock Tests from which plenty of questions came directly and indirectly in UPSC CSE Mains 2014. As a free initiative to guide aspirants who don’t have access to expensive classroom coaching, we feel happy and satisfied to know from comments and emails that many of our students cleared mains 2014. Clear IAS wish you all the very best for the personality test.

If time permits, we plan to prepare and send via email a small e-book with major current affairs notes and tips for UPSC Interview preparation 2014-2015. All successful readers of ClearIAS.com who wish to get the UPSC Interview preparation e-book 2014-2015 for free may mention the full name, roll number and email address in the comment section below or in a separate email to contactus[at]clearias.com.

Those who are yet to make it…

And those who didn’t make it to the personality test, never confuse a single defeat with final defeat. We know it’s tough to stay inspired for long, particularly after setbacks. But one failure is not the end of life. Adding below a few inspirational quotes, which are personal favorites of mine.