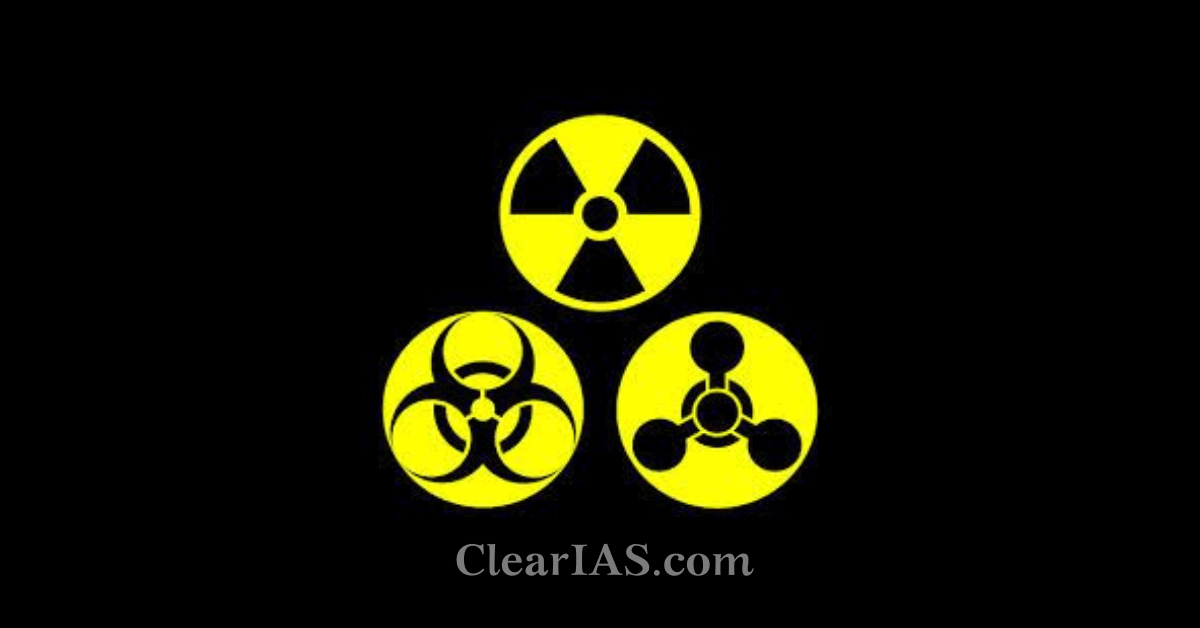 Weapons of mass destruction are a controversial set of weaponry capable of causing large-scale damage, Read here to know more about them.

The Government of India introduced the Weapons of Mass Destruction (WMD) and their Delivery Systems (Prohibition of Unlawful Activities) Amendment Bill, 2022 in the Lok Sabha.

The bill contemplates prohibiting the financing of any activity concerning WMD and to empower to act against financiers of such activities.

Key points of the Bill:

The bill is to modify the Weapons of Mass Destruction and their Delivery Systems (Prohibition of Unlawful Activities) Act, 2005. This Act covers unlawful activities relating to biological, chemical, and nuclear weapons and their delivery systems.

It also provides for integrated legal measures to exercise controls over the export of materials, equipment, and technologies concerning weapons of mass destruction and their delivery systems and for prevention of their transfers to non-State actors or terrorists.

The existing Act does not cover the financial aspect of such delivery systems and the new provisions are essential to meet international obligations.

A weapon of mass destruction (WMD) is a nuclear, radiological, chemical, biological, or any other weapon.

WMD has the potential to kill and bring significant harm to a large number of people or cause immense damage to artificial structures, natural or the biosphere.

Weapons of mass destruction constitute a class of weaponry with the potential to:

Multilateral treaties targeting the proliferation, testing, and achieving progress on the disarmament of nuclear weapons include:

Several treaties also exist to prevent the proliferation of missiles and related technologies, which can be used as a vehicle to deliver WMDs:

Weapons of Mass Destruction: Measures taken in Asia and the Pacific

States in Asia and the Pacific have experienced first-hand the inhumane effects of WMDs, and the region has assumed a leadership role in the global campaign to delegitimize all forms of WMDs.

Three of the six treaties establishing nuclear-weapon-free zones are located in Asia and the Pacific:

Types of Weapons of Mass Destruction

As mentioned earlier the core types of WMDs are biological, chemical, and nuclear weapons:

A bioweapon or biological agent of threat is the usage of bacteria, virus, protozoan, parasite, fungus, chemical, or toxin purposefully as a weapon in bioterrorism or biological warfare.

More than 1,200 different kinds of potentially weaponizable bio-agents have been described and studied to date.

The 1972 Biological Weapons Convention (BWC) is an international treaty banning the development, use, or stockpiling of biological weapons; as of March 2021, there were 183 States Parties to the BWC.

In 1985, the Australia Group was established, a multilateral export control regime of 43 countries aiming to prevent the proliferation of chemical and biological weapons.

In 2004, the United Nations Security Council passed Resolution 1540, which obligates all UN Member States to develop and enforce appropriate legal and regulatory measures against the proliferation of chemical, biological, radiological, and nuclear weapons and their means of delivery, in particular, to prevent the spread of weapons of mass destruction to non-state actors.

A chemical weapon uses chemicals to inflict death or injury on living and non-living beings.

According to the Organisation for the Prohibition of Chemical Weapons (OPCW), this can be any chemical compound intended as a weapon “or its precursor that can cause death, injury, temporary incapacitation, or sensory irritation through its chemical action. Munitions or other delivery devices designed to deliver chemical weapons, whether filled or unfilled, are also considered weapons themselves.”

Chemical weapons can be widely dispersed in gas, liquid, and solid forms, and may easily afflict others than the intended targets. Nerve gas, tear gas, and pepper spray are three modern examples of chemical weapons.

During World War II the Nazi regime used a commercial chemical agent to commit industrialized genocide against Jews and other targeted populations in large gas chambers. The Holocaust resulted in the largest death toll on chemical weapons in history.

International law prohibited the use of chemical weapons under the 1899 Hague convention.

The 1922 Washington Naval Treaty, also known as the Five-Power Treaty, aimed at banning chemical warfare but did not succeed because France rejected it.

The 1925 Geneva Protocol, officially known as the Protocol for the Prohibition of the Use in War of Asphyxiating, Poisonous or other Gases, and of Bacteriological Methods of Warfare, is an international treaty prohibiting the use of chemical and biological weapons.

A nuclear weapon is an explosive device that derives its destructive force from nuclear reactions, either fission or a combination of fission and fusion reactions. Both bomb types release large quantities of energy from relatively small amounts of matter.

Nuclear weapons have been deployed twice in war, by the United States against the Japanese cities of Hiroshima and Nagasaki in 1945 during World War II.

Presently eight countries- China, France, India, North Korea, Pakistan, Russia the US, and the UK- have acknowledged being a nuclear state. But other countries like Israel maintain nuclear ambiguity.

In the 1960s, steps were taken to limit both the proliferation of nuclear weapons to other countries and the environmental effects of nuclear testing.

In 1957, the International Atomic Energy Agency (IAEA) was established under the mandate of the United Nations to encourage the development of peaceful applications of nuclear technology, provide international safeguards against its misuse, and facilitate the application of safety measures in its use.

In 1996 the Comprehensive Nuclear-Test-Ban Treaty (CTBT) was introduced which prohibits all testing of nuclear weapons. A testing ban imposes a significant hindrance to nuclear arms development by any complying country.

The presence of weapons of mass destruction in the world is a terrifying reality and efforts have to be put in by the international community together with support from the nuclear-weapon states for guaranteeing a safer and peaceful world.

Biological weapons are of the greatest concern to mankind in the contemporary world among all the components of weapons of mass destruction hence requiring a stringent verification mechanism.

For Chemical Weapons, the stipulated goal enshrined in the CWC has not been achieved so far. The CWC prohibited the development, production, and stockpiling of chemical weapons and the signatories were supposed to destroy their existing stockpiles by 2007. Unfortunately, it had not been able to keep the time limit and the movement towards achieving the target has not picked up.

The current debate on a nuclear-weapon-free world has to take a proper shape and the commitment has to come from top nuclear weapon countries like the United States and Russia.

The threat is real and unless and until adequate measures are taken on time, the possibility of getting hold of fissile materials in the wrong hands can never be ruled out encouraging acts of bioterrorism.