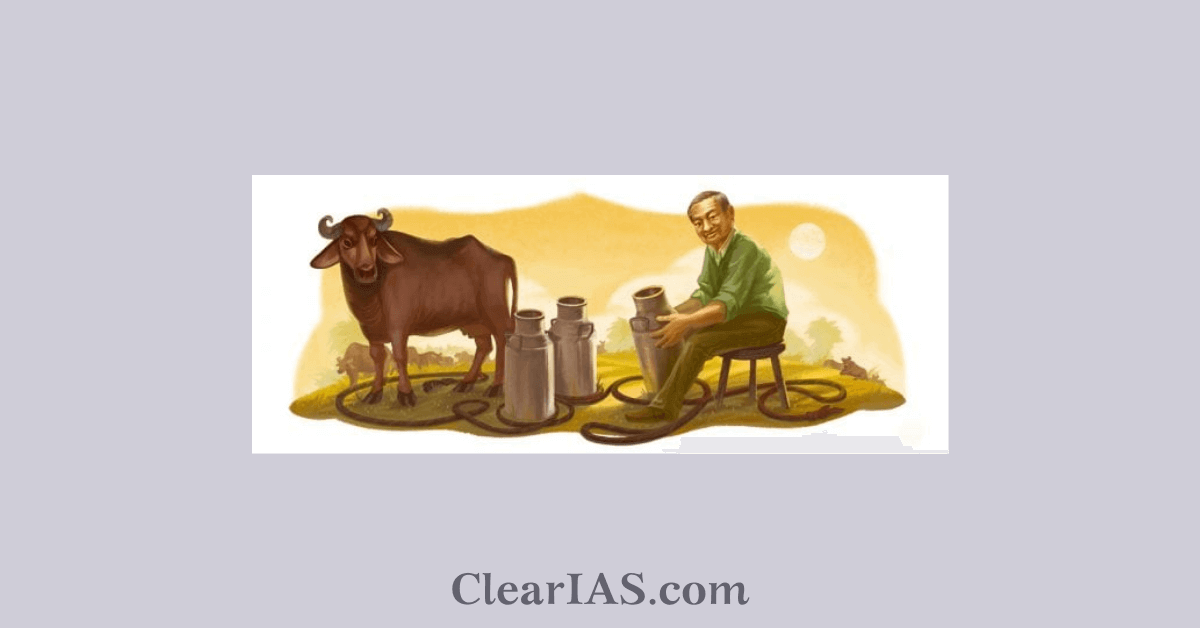 Operation flood or the White Revolution was one of the biggest rural development programs. Amul played an important role in its success. Read here to know more about it.

The “Milkman of India”, Dr. Verghese Kurien left a permanent mark on revolutionizing the food processing sector in India.

Dr. Kurien’s good understanding of Indian farming and the trust he earned from the farming community have helped the Indian dairy sector greatly.

His widely cited observation, that “India’s place in the sun will come from the partnership between the wisdom of its rural people and the skill of its professionals”, captures the essence of his life and mission.

Operation Flood or the White Revolution

The success of the Green Revolution was one of the encouragements in pushing the idea of the white revolution to be implemented that too at such a large scale.

Operation Flood, launched on 13 January 1970, was the world’s largest dairy development program and a landmark project of India’s National Dairy. It transformed India from a milk deficient nation into the world’s largest milk producer, surpassing the United States of America in 1998.

It was launched to help farmers develop by giving them control of the resources they create. All this was achieved by mass production and production by the masses; the process has since been termed as the “White Revolution”.

The making of skim milk powder out of buffalo milk was the technological breakthrough that revolutionized India’s organized dairy industry. The man who made this possible was Harichand Megha Dalaya. The Anand Pattern Experiment at Amul, a dairy co-operative, was the reason behind the success of the program.

Phase II: Operation Flood Phase II (1981–1985) increased the number of milk sheds from 18 to 136; urban markets also expanded the outlets for milk to 290. By the end of 1985, a self-sustaining system of 43,000 village co-operatives with 4,250,000 milk producers was covered. Domestic milk powder production increased along with direct marketing of milk by producers’ co-operatives.

Role of Amul in White Revolution

The Amul trinity: Verghese Kurien, Shri Tribhuvandas Kishibhai Patel, and Harichand Megha Dalaya were the key figures in making this initiative a success. Amul was a key player in the success of the operation flood.

The success of Amul has encouraged similar movements in other agricultural commodities in India. Such sectors excel in areas such as marketing and management, branding, and technology, and set benchmarks for firms all around the world to follow and adapt.

Also, Amul has progressively established itself as a laboratory, creating important inventions and inventing its technologies, which has improved its competitiveness against global firms.

Amul Cooperative Model has steadily expanded its product line and added new ones, building on the strong foundation created by its visionary leader. Amul is still one of India’s most well-known food brands, and other dairy cooperatives such as Nandini in Karnataka, Aavin in Tamil Nadu, and Verka in Punjab look up to it for inspiration.

The success of operation flood

Operation Flood was conceived and implemented as much more than a dairy program. Rather, dairying was seen as an instrument of development, generating employment and regular incomes for millions of rural people.

The dairy sector was revolutionized by the program and saw many changes like:

In the 20 years since its launch, Operation Flood or the white revolution has made India, which once used to import milk, the world’s third-largest producer of milk and an exporter. In the same period, the number of milk cooperative societies has grown from 10,000 to 60,000.

The Amul cooperative brought home better prices for the producers generated direct employment for thousands and in the process served as an instrument of social and economic change.

Hence considering the impact the white revolution had not only on the dairy sector but rural India as a whole, its successes outweigh the few criticisms by a large margin.

Every year 26 November is observed as the National Milk Day across the country.

In 2021, National Milk Day was being observed by the Centre as part of the Azadi Ka Amrit Mahotsav celebrations.

The Government distributed the National Gopal Ratna awards at the National Dairy Development Board (NDDB) campus in Anand.