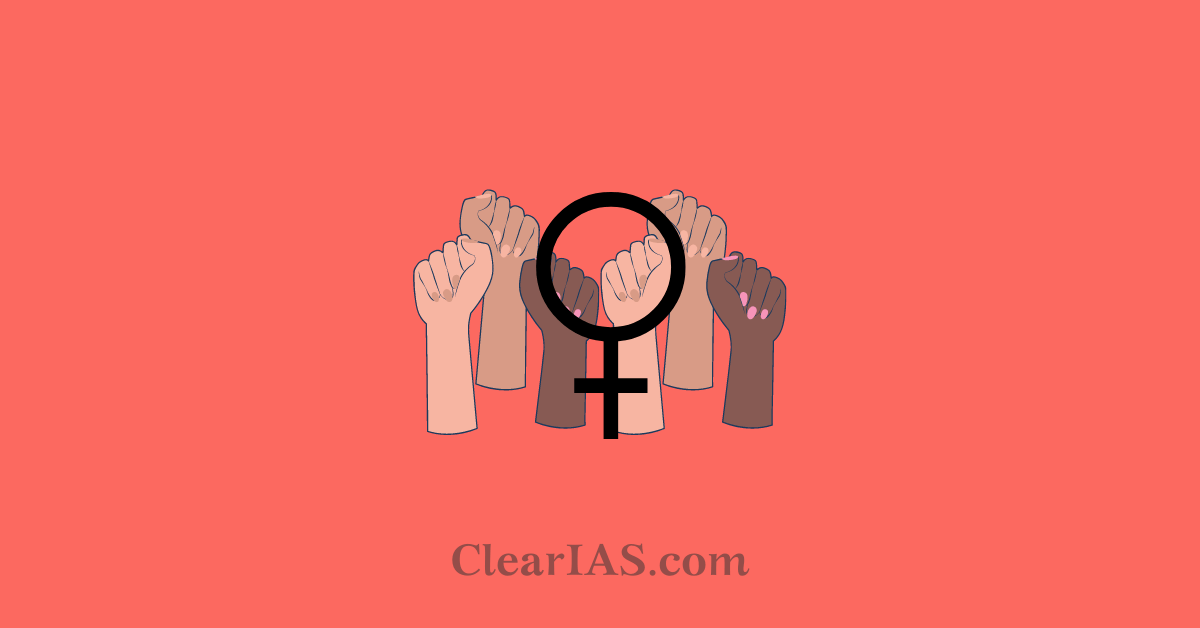 What is the role of women and women’s organisations in Indian Society? Read here to know about the history of women’s organizations and movements in India.

Historically women all around the world have faced a similar set of issues during different periods like- Inferior status in society, Lack of education, Early marriage, being Forced out of public life, Poor conditions of widows.

In India, the fight for the betterment of women’s condition in society was started by men social reformers in the early 19th century. Later on, women themselves started forming organizations and at local and later national levels also. Most of these organizations worked to end social evils against women but the years around the independence saw the demand for political rights and reform of personal laws as well.

History of the role of women in Indian Society

The status and role of women in India have seen drastic changes over the past millennia. In ancient times, Indian women’s role was confined to the house and their families. In the Medieval period, the status of women was declined considerably. And in modern times, women started fighting for their rights and equality.

During the period of Indus valley civilization, the status of women was equal in honour. The worship of the mother goddess demonstrates that they were respected in the form of a mother.

During Rig Vedic period, women had superior status and they got more liberty and equality. The position of wife was a privileged one in the household and women had enhanced status in performing religious rites.

In the terms of education, both boys and girls were given equal opportunities. After observing Upanayana Samskar, girls were permitted to spend their life in Gurukul.  The education of girls was considered an important qualification for marriage.

During the age of Upanishads also women had a superior role in society and widows had freedom of remarriage as well. The presence of women teachers, many of whom possessed the highest spiritual knowledge was also a feature of this period.

The later years saw a decline in the role and status of women in public life. Early marriage started hindering education and women slowly started diminishing from away from political and educational spheres.

The Maurya and later, the Gupta period saw the practice of Sati increasing, and women’s lives were dictated by the men in her life. The upper-class women were much more confined to their homes and were not allowed to be out in public life.

Women in the medieval period:

This period saw many social evils like female infanticide, sati, child marriages, the Purdah system, and widow’s condition were more miserable. The inflexibility of the caste system deprived of them the right to freedom and social movement. She was forced to lead a life away from society as well as family. The inhuman practise of Sati had become forced and predominant.

The modern period saw the start of the fight by women to gain their position and stature back slowly. Many movements and organisations came up led by both men and women for the upliftment of women in society.

This male-guided organization and reform efforts were not truly liberating in many areas. The earlier reformers wanted women to be educated but did not want them to step out of their homes into public life.

The Age of Consent act. 1891: The cases of death of 11-year-old Phulmoni Dasi due to marital rape (1887) and child-bride Rukmabai led to the enactment of the age of consent act. This act raised the age of consent for sexual intercourse for all girls, married or unmarried, from ten to twelve years in all jurisdictions, its violation subject to criminal prosecution as rape.

In 1910, Bharat Stree Mahamandal was formed by Sarala Devi Chaudharani (Daughter of Swarnakumari Devi) to bring together women of all castes and creeds together. They targeted the purdah system to liberate women to openly work in public life. They opened many other branches all over the country to promote female education.

The three major national women’s organizations which thus trace their origin to the decade between 1917-1927 were:

The NCWI was formally formed in 1925, with the efforts of Bombay, Calcutta, and Madras’s dedicated and influential women who had contributed commendably to the war efforts. It came to be accepted as the national branch of the International Council of Women.

AIWC was an organization dedicated to the upliftment and betterment of women and children. The first President of the AIWC, the Maharani Chimanbai Gaekwad of Baroda, underlined the need for a special type of education for women, compatible with their nature. Margaret Cousins was the Secretary. Renowned women like Sarojini Naidu, Kamla Devi Chattopadhyay, Renuka Roy, Rajkumari Amrit Kaur, Rameshwari Nehru, Begum Hamid Ali, Dr. Muthulakshmi Reddy, etc. were in the leadership of this organization.

The result of these organizations was that the Montague-Chelmsford Reform Act of 1919 gave women the right to vote in elections to all state legislatures but not to the Council of State for Governor-General.

Women in the national and labour movements:

Swadeshi movement after the Bengal partition of 1905 and the Home rule movement saw the participation of women in limited numbers. They also attended sessions of INC during this time.

The really large number of women participation was seen in the Non-cooperation movement launched by Gandhiji in 1920 where women played a vital role in organizing processions, picketing shops selling foreign clothes and liquor, and even went to jail.

The peasant women wholeheartedly participated in Borsad and Bardoli Satyagraha.

The women from all walks of life took part in Salt Satyagraha, Civil Disobedience Movement, and Quit India Movement. Many of these women faced lathi charges and went to jail also.

There were women involved in the revolutionary and extremist activities also:

SEWA (self-employed women’s association) was formed in 1972 by Ela Bhat in Ahmedabad. It aimed to improve the condition of poor women who worked in an unorganized sector by providing training and technical aides.

The women’s movement in pre-independent India has been called the first wave of feminism. In this phase, women blamed tradition and social structure for their suffering and sought redress through education and legal change.

The women organizations had brought women’s issues to the forefront. These organizations helped women to come out from domestic boundaries, assemble, and fight for their cause. This prepared the base of women’s active participation in the struggle for freedom also.

Defying the barriers of age, gender, and religion, the Indian women became the torchbearer during the struggle for freedom in India. Discuss. (10 marks-200 words)