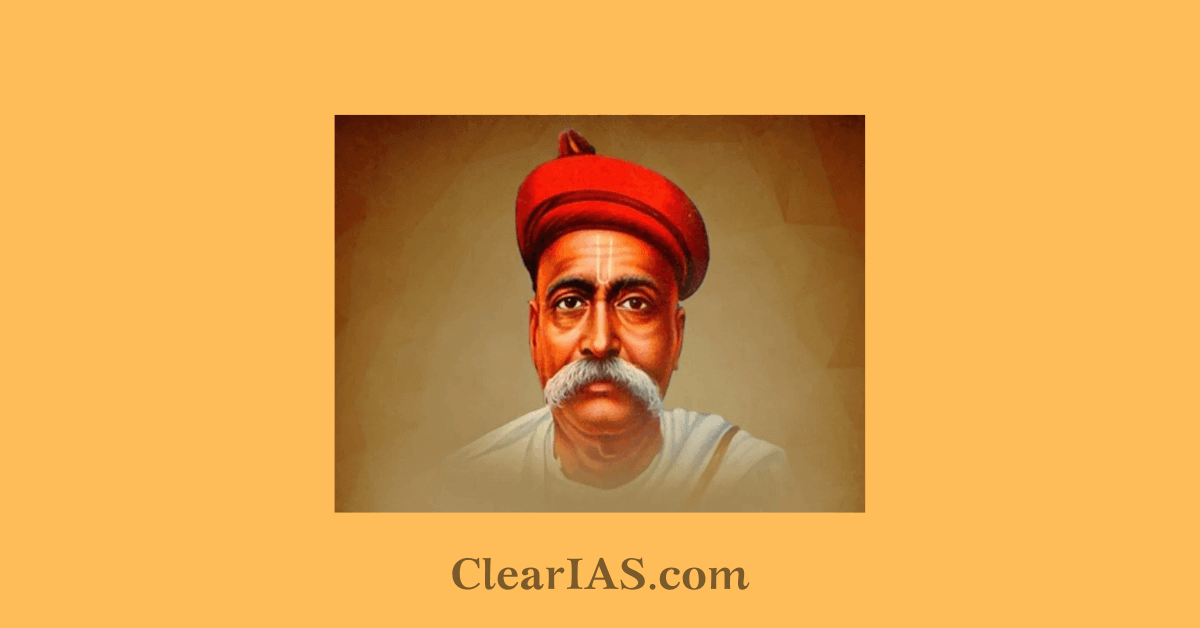 Keshav Gangadhar Tilak, infamously known as “The father of the Indian unrest” is one of the first leaders who stood for Swaraj or Self-Rule in India. He also popularized the quote “Swarajya is my birthright and I shall have it”.

Mahatma Gandhi had called him “The Maker of Modern India”.

Tilak was born in a Chitpavan Brahmin family in Ratnagiri (Bombay presidency). His father was a teacher and Sanskrit scholar who died when Tilak was 16 years old.

In 1877 he obtained his Bachelor of Arts in mathematics from Deccan college of Pune.

He left his M.A course midway to study law (LLB). In 1879 he obtained his LLB degree from government law college, University of Bombay.

After graduating he started teaching mathematics at a private school in Pune, from where he withdrew later and became a journalist.

1880: Tilak co-founded the New English School for secondary education with a few of his associates like Gopal Ganesh Agarkar, Mahadev Ballal Namjoshi, and Vishnushastri Chiplunkar. Their goal was to improve the quality of education for the youth of India.

1884: Deccan Education Society was set up by them to further their goal of educating the youth to make them proficient in English and nationalistic ideology along with Indian culture. Tilak and his associates considered English to be a powerful tool for the dissemination of liberal and democratic ideals.

1885: The society established the Fergusson college in Pune for post-secondary studies. Tilak taught Mathematics here for a while.

1890: Tilak resigned from society and joined the newly formed Congress.

He wanted to widen the popularity of the nationalist movement which was mostly confined to the upper classes by introducing the Hindu religious symbolism and invoking Maratha sentiments and traditions of the Maratha struggle against Mughals.

To build anti-imperialist sentiments he wrote about celebrating the Ganapathi festival and Shivaji festival on large scale.

1897: He was prosecuted for sedition for his writings against the provisions of the Epidemic act 1897 for tackling the bubonic plague that had engulfed the Pune region.

Tilak’s idea of swaraj was gaining popularity and he became a very important extremist leader of congress in the time being.

1905: Viceroy Curzon partitioned Bengal- Tilak strongly opposed this move and supported the Bengali demand for annulment of the act. He advocated for the boycott of British goods, which soon became the Swadeshi movement.

1906: Tilak put forward a program of passive resistance– ‘Tenets of the new party’ in front of the Congress-to prepare people to sacrifice to gain independence. This form of resistance was later adopted by Gandhiji against the British,

1907: The moderate leaders did not agree to such political actions which led to the Surat split between the moderates and extremists.

Bal Gangadhar Tilak, Lala Lajpat Rai, and Bipin Chandra Pal– known as the Lal, Bal, Pal– were the extremist leaders whose writings instilled many revolutionary activities in the country.

Leaders like Aurobindo Ghosh were also related to them and a few secret societies like Anushilan Samiti in Bengal came up during the period.

Tilak through his newspapers wrote criticisms against British rule and the moderate nationalists who advocated social reforms along western lines and political reforms along constitutional lines.

He was against social reforms through the interference of the British rather, he believed that social reforms should be done after the Indians get to self-rule. This view of him caused him to oppose the ‘age of consent act’ of 1891.

1908: The Surat split of 1907 helped the British government take advantage of the division and again charged Tilak with sedition and inciting terrorism.

Tilak’s politics had mellowed down after this, which was evident in his support of the British government in World War I, he had also given speeches to encourage youth to support British war efforts.

1916: He established the All India Home rule league in Belgaum with the slogan “Swarajya is my birthright and I shall have it”.

It worked in Maharashtra (except Bombay), the central provinces, Karnataka, and Berar.

He also collaborated with the Home Rule organization started by Annie Besant in Madras.

He rejoined the Congress in 1916 in the Lucknow session, and his good relation with Mohammed Ali Jinnah led to the historic Lucknow Pact between the Muslim League and Congress.

1918: Tilak visited England as the president of the Indian home rule league and garnered support and good relations of the labour party which was emerging as a major stakeholder in British politics.

1st August 1920: Tilak passed away on the day of the launching of the non-cooperation movement.

Gandhiji started the Tilak Fund to pay respects to the contributions and sacrifices of Tilak for the freedom struggle.

Tilak’s vision of gaining independence by mass movements, hartals, the boycott of foreign goods, etc was fulfilled under Gandhiji’s leadership.

Tilak was one of the earliest leaders to say that Indians should not cooperate with the foreign rule but he never encouraged the use of violence in his speeches even though his writings were explosive.

Tilak continued his writings while he was in the Mandalay jail- he wrote the ‘ Srimad Bhagavadgita Rahsya’ in which he discarded the orthodox interpretation of Gita that it taught the ideal of renunciation, instead, in his view, it taught selfless service to humanity.

Earlier in 1893, he had written ‘The Orion- Researchers into the Antiquity of the Vedas’ and in 1993 ‘The Arctic Home in the Vedas’.

Both these works were to promote the Hindu culture as the successor to the Vedic religion whose roots he believed are connected to the Aryans who came from the polar north (he pointed out similarities between gods like Indra and Thor – god of thunder in Norse mythology).

So he gave the Aryan migration theory that is, the Aryans migrated north when the ice age began.

In today’s time, Tilak would be called a masterful political economist as he understood the links between culture, economics, and politics and laid the base of the Freedom struggle for India. As a politician, an economist, a lawyer, and a teacher, Tilak was truly the “Maker of Modern India” as Mahatma Gandhi rightly called him.